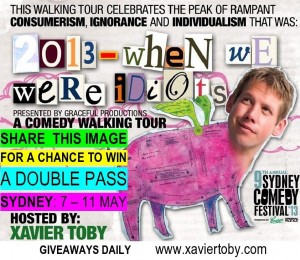 The year is 2113. Our world is not the dystopian sci-fi fantasy as predicted in countless 80â€™s flicks, but an aquatic age lead by penguin dressed comedian Xavier Toby. 2013 â€“ When We Were Idiots, is a back-to-the-future journey through the streets of Brisbane, where by looking through the fish bowl of our present day lives we get to poke a stick at our ridiculousness.

Celebrating an age of rampant consumerism, ignorance and individualism, Toby describes a time when there were â€œcars, mobile phones, beef, pop music, sport, the stock market, advertising and reality television. A time when peopleÂ actually denied the existence of climate change, gay marriage and vampires.â€

Inspired by an encounter at a Chinese museum where historical facts were â€œjust guessed,â€ When We Were Idiots is a walking tour focussing on a little bit of history, a fair bit of present and a lot about the future.

â€œIt was this idea of putting the past in the future and wondering what people would think when they look back at us through our reverence of people like the Beibers and the Kardashians,â€ stated Toby.

This flux-capacitor movement is part of Brisbaneâ€™s Anywhere Theatre Festival, a not-for-profit company giving people the opportunity to experience live arts away from traditional theatre spaces.

â€œI really like the idea of getting outside the room,â€Â Xavier Toby says. â€œNormally in a comedy room if you yell something out youâ€™re a heckler, but on the walking tour we make up the future as we go along. Itâ€™s very interactive and people get to rediscover the city the way they want to see it.â€

The streets of Brisbane promise to never be the same again so pull on a silly hat and hop along to this journey back in time. Itâ€™s not every day you get to analyse a nod of Neanderthals in their natural habitat.