Brisbane theatreâ€™s night of nights leapt dramatically off the rails on Monday, with scathing departure speeches, over the top presenters, missed cues, off-script politicians and an audience drunk on the hilarity of it all.

The signs that this yearâ€™s Matildas would not be going quite to plan manifested very early on, as hosts “Barbra Windsor Woo” (Leigh Buchanan) and “Larry Paradisio”Â (Carita Farrer Spencer) stepped onto stage in a whirl of sequins and stomach-padding. After a raucously inappropriate introduction from Spencer, committee chair Rosemary Walker somewhat nervously took the podium, and got down to the real meat of the evening: administrative business. Walkerâ€™s announcement that next yearâ€™s Matildas would include five design categories was met with cheers; her attempts to settle the audience enough to outline the voting procedure with the unruly glee of a difficult class riling a new substitute teacher. Things only escalated when outgoing committee member and awards co-founder Alison Cotes was introduced, and the real bloodletting began. 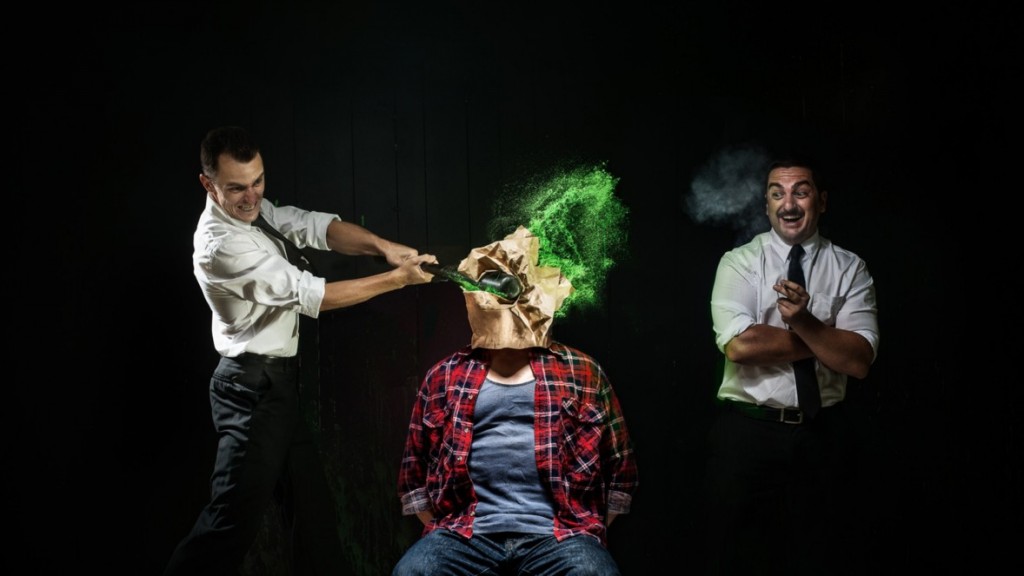 The Matildas are South East Queenslandâ€™s only dedicated awards for theatre workers, making them extraordinarily valuable â€“ and it seems, at risk of overfamiliarity among the committee. In her last few minutes of official involvement with the awards, Cotes itemised her displeasure at everything from the make-up of the judging panel to the design of the statues in a speech liberally peppered with ominously ambiguous personal remarks. Flowers in hand, Cotes then left the stage, the Matildas under new management and the audience in fits of barely restrained, shocked laughter.

The night did eventually get around to the awards themselves, and with the help of special guest and straight-man to an increasingly madcap evening, Leon Cain, things got underway. However, with the carefully cultivated sleaze of Farrerâ€™s Paradiseo thick on the ground, the dignity of the ceremony (particularly of the female recipients) was evaporating fast, and it was a tremendous relief when Naomi Price (picking up the gong for Best Female Actor in a Supporting Role) finally kicked the well-oiled caricature out of her spotlight.

As expected, it was a banner evening for Queensland Theatre Company, who took home six awards. Naomi Price was the only recipient for Ladies in Black, while Groundedâ€™s Libby MunroÂ won for Best Female Actor in a Leading Role. In a nice bit of kismet for an awards show largely focussed on Brisbane theatre, Brisbane took out three of the big categories, winning Best Male Actor in a Leading Role (Dash Kruck), Best Mainstage Production and Lord Mayorâ€™s Award for Best New Australian Work. Lord Mayor Graham Quirk stepped up to present the last of these, but was ultimately pipped by the on-screen visuals. What he did manage to land, however, was a stunningly unexpected, election-based penis joke. Cue more wild laughter from the stalls. 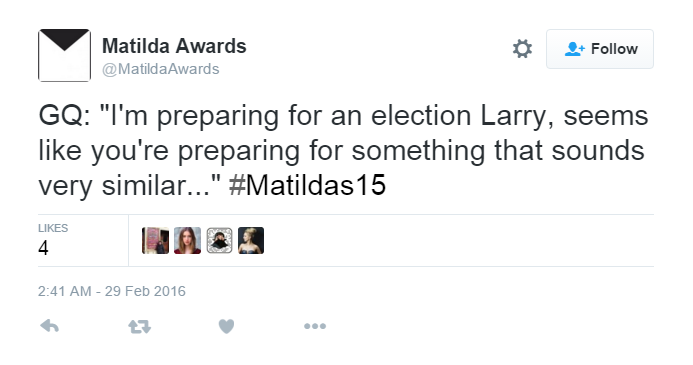 In the independent sector, The Pillowman swept the floor, with Best Director (Sam Foster), Best Male Actor in a Supporting Role (Tama Matheson), and Best Independent Production. Meanwhile, shake & stirâ€™s Dracula nabbed both Best Design (Josh McIntosh) and Best Technical Design (Jason Glenwright). Georgina Hopson was named Best Emerging Artist for her work in Into The Woods andÂ The Pirates of Penzance, while Dash Kruck and Jai Higgsâ€™s I Might Take My Shirt Off won Best Musical or Cabaret.

While all recipients did credit to local theatre, it is worth noting again the glaring absence of La Boite’sÂ Prize Fighter among the nominations, an oversight made somewhat worse by the controversy that has surrounded an incredibly pale 88th Academy Awards. While the Matildas are championing the oft-overlooked Brisbane scene, they unfortunately still have plenty of room to support more diversity in that same sector

Overall, the 2015 Matilda Awards took place in a rather strange atmosphere, the mood vacillating between amusement and solemnity. The presence of the late Carol Burns hung heavily over proceedings, and her incredible legacy to the theatre community, both professionally and personally, was palpable in every speech that credited her warmth, kindness and comradeship. This year saw the streamlining of the Gold Matildas to a single award, and it was only fitting that this statue was posthumously awarded to Burns, for an outstanding performance in Happy Days and a lifetime of incredible work.

The sombre mood was abruptly shattered, however, as audiences returned to their seats from a standing ovation for the final return of Paradiseo. Clad only in a sheer red drape, he belted out a cover of Eurovision winner Conchita Wurstâ€™s Rise Like A Phoenix, heavily revised to include more references to genitalia, in what seemed a concerted attempt to outshine the Lord Mayor in the arena of inappropriate jokes.