2016 is shaping up to be a huge year for live music, and while some of us are still scouring for money after the holiday season, big-scale touring artists are not making it any easier for our bank accounts.

The beginning of 2016 ushered in something for everybody; rap, dance, pop, rock. We can beat the Brisbane heat if we’ve got some good music to accompany us.Â Here is your essential guide to some must-see artists and shows to catch this Brisbane Summer!

dam-funk’s name seems pretty explanatory of the kind of music to anticipate on the night. The funk shall be within you, as this event will ensure dancing is at an optimum high. Having worked with Snoop Dogg and Stones Throw Records, dam-funk coming to Brisbane is an event for any and all demographics. With soundsÂ and lyrics that seem to be the musical equivalent of positivity and the warmth of the sunshine, this night is guaranteed to carry some good, good vibes.

When: 21st of January (Thursday)
Where: Woolly Mammoth
Tickets:Â https://mammothmanestage.ticketscout.com.au/gigs/4884

With sounds that are sonically entrancing and very much ahead of its time, LE1F is a queer rapper coming all the way from New York to bring his groundbreaking music and message to our attention. His songs are at times dark and his music videos full of avant-garde imagery, as he explores topics and avenues we perhaps find too confronting to venture down. LE1F does this all with style, strength and self-awareness, and he’s bringing it right to us, Brisbane.

With the voice of an estranged angel, or what I imagine a mermaid to resemble, Joanna Newsom is a musician who seems to be out of this world. The multi-talented, harp playing songstress is blessing us with her presence this January, and we feel like instead of her entering our world, we’ll instead be transported to hers.

HOT CHIP with EMPRESS OF and TOUCH SENSITIVE

Probably one of the biggest parties this year, as Hot Chip’s postponed show is finally happening and we cannot be more excited. Joined by fellow party professionals, Hot Chip will bring the first month of the year to an exhilarating close. By combining the powers of the everlasting genre of disco and contemporary beats, Hot Chip brings us the ultimate recipe for a good time.

When: 27th of January (Wednesday)
Where: The Tivoli
Tickets:Â http://www.ticketmaster.com.au/event/13004F5AD07BAAFC?did=frontier 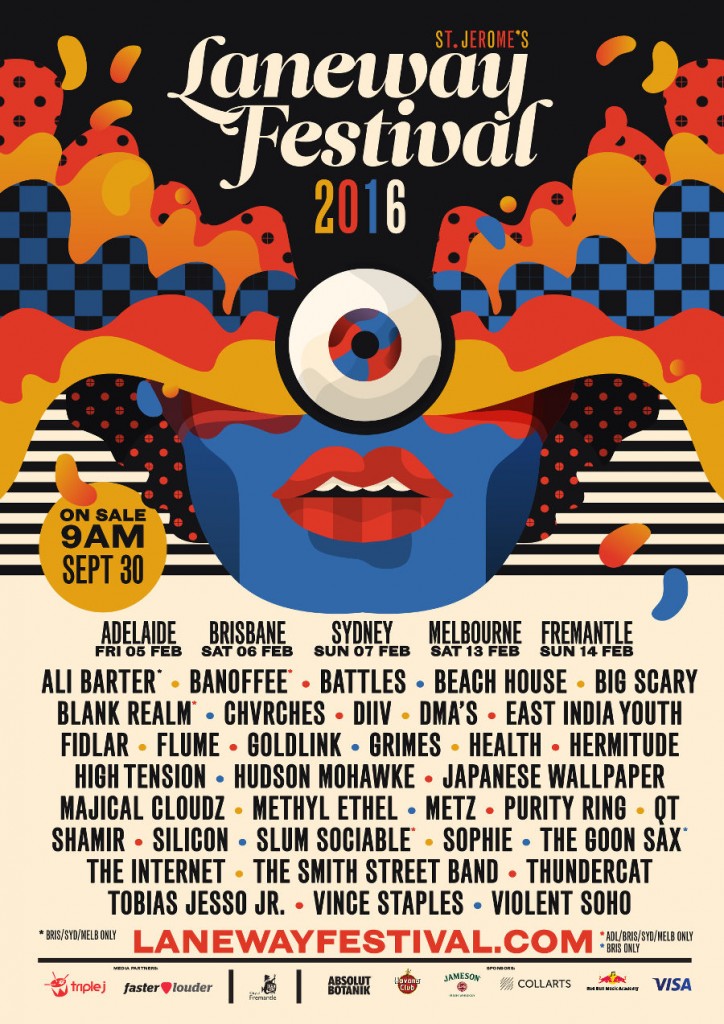 A staple for all music festival addicts, Laneway Festival this year has a lineup made in heaven. With an eclectic mix of genres, this festival brings in the last month of February with the swooning sounds of some of the best releases of 2015, such as Grimes, The Internet, Thundercat, Beach House and Vince Staples. As these artists arrive for their Australian leg of the tour, we cannot help but rejoice that they are coming to one of our favourite music festivals to date.

A$AP Rocky brings his imagination and creativity to an all new high, as his name is now difficult to ignore. His ascend into the rap industry has been hard to miss, as his latest album is one that incorporates many new elements of his artistry. Rocky dabbles with psychedelic and soul sounds and creates one of his most impressive records to date, all while showing his versatility as an artist, fashion tycoon and rapper, displaying that all three of those elements have always been closely aligned.

Legendary R&B artist is celebrating the release of his latest and highly anticipated full-length album coming to Brisbane. With vocals that are reminiscent of chocolate fondue that serenade words of smooth seduction, it is without a doubt one of the events of the Summer for anybody who enjoys the romance of rhythm and blues, expressed by one of the most admired artists of its genre.

If you like Mac Demarco and dancing in a summer haze, then you cannot miss Canadian outfit Homeshake. Their music reminds one of drinking pink lemonade, spending more hours than advise immersed in a pool of water, or driving to a beach with your windows down. As carefree as they are, their lyrics are poignant and pensive, and are at times angsty but layered with drowsy guitars and slurring vocals. Forget some of your troubles and head to The Brightside for a show of rhythmic swaying and the celebration of Summer.

WU TANG ARE COMING. You’ve probably seen their iconic yellow and black posters sprawled around our city. The iconography so simple and yet so distinguishable, as the rap legends are coming to Brisbane for their world tour. Just like their aesthetics, their music is just as recognisable and influential to any fan of hip hop and music in general. There’s truly no more memorable a way to end the Brisbane Summer with the Wu Tang Clan bringing the heat.

The sum of a tradition – an interview with Ryan Francesconi