The setting was modest and simple. Black clothed tables, fairy lights surrounding the perimeter and one spotlight lit stage waiting for the talent to arriveâ€¦ and boy oh boy, did the talent arrive.

Greeted by the charismatic MC Helen, the night got off to aÂ bright startâ€¦ all until the lights went out and we had to call an electrician. But never fear, the kids had it covered! Out from behind the wings came a boy literally walking ON A LADDER. Thankfully he managed to fix the lighting and the show went on smoothly without any more technical issues.

The audience spent most of the night holding their breath, laughing hysterically and in complete awe of the talent of these young performers. The shear confidence that circus has given the performance team was clear. 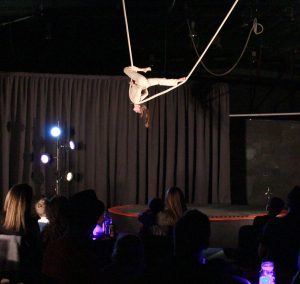 The nightâ€™s program was just as it was advertised. A night of variety. There was a mime performance merged with acrobatics, as two girls got â€˜stuck in a liftâ€™. One of the youngest members of the troupe took to the stage for a silk performance. There was a juggling duo. Luke the Amazing, with his uni cycle, audience participation and clowning around. Swing and rope acts by some of the more experienced members of the troupe. A mesmerizing hula-hoop dance that displayed focus, artistry and a delicate touch. And the night was concluded by a group performance of fast pace gymnastics and tumbling.

Flipsideâ€™s Cabaret Show was just as entertaining as any performed under a big top or in a theatre. If you want to have to a chance to witness the talents of these young stars you better act quick, as the show wraps up this weekend, with a big fundraising event happening this Saturday the 26th. This event will be concludedÂ by an â€˜adults onlyâ€™ show that will feature the trainers at Flipsideâ€¦ which is definitely not one to be missed!

The Kite String Tangle on His New Album and Touring