Queensland Ballet’s production of Ben Stevenson’s Cinderella is an enchanting, evocative, and humorous rendition of the well-known fairy tale.

Performed in the impressive Lyric Theatre at Queensland Performing Arts Centre, I was transfixed by Queensland Ballet’s production of Cinderella from the moment the orchestra, Queensland Festival Philharmonic, ceased tuning and began the first piece in their bittersweet score. There is this moment where the music begins but for a few moments the audience remains staring at the plush red velvet curtain, wondering what imagined world is about to be revealed, a highly evocative method of introducing the performance.

When the curtain rises, and the set is revealed, the audience is transported to the large family room of a stately home, complete with an oversized fire place, family portraits, and stone staircase. The opening dance numbers set the scene of the story: a kind and beautiful young woman, Cinderella—Neneka Yoshida, endures the torments from her cruel step-mother and ill-favoured step-sisters—Lisa Edwards, Liam Geck, and Alexander Idaszak. The young woman shows kindness when a strange old woman arrives seeking shelter, who later reveals herself as Cinderella’s fairy godmother. With the aid of her fairy godmother and the fairies of Spring, Summer, Autumn, and Winter, Cinderella is transformed on the night of the royal ball and able to attend in disguise.

The second act takes place at the royal ball with the court jester, Rian Thompson, welcoming the attendees in a coy and mischievous manner. Thompson’s performance as the jester is spritely and endearing. As the jester and step-sisters, Thompson, Geck, and Idaszak brought consistent humour to the stage that gave diversity to the performance. The story ranges from tragic to beautiful and the dancing was poised, trained, and breathtaking to watch, so the humour Thompson, Geck, and Idaszak were able to bring while maintaining the elegance of their profession was enjoyable. I was enchanted by the way the entire cast, these three in particular, were able to balance the integrity of the dance with the performance requirements of the characters. 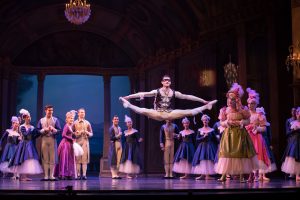 Queensland Ballet’s Cinderella is an incredible balance of disciplined dance, both harsh and romantic music, imagination, and performance. The audience ranged from young girls in princess dresses to older women with pearl strings around their neck and men in shined shoes. Don’t miss this opportunity to see a contemporary yet classic rendition of this well-known and well-loved fairy tale.

Jaguar Jonze Talks You Got Left Behind