Thousands of people, no shoes and about ten bras between them all, Woodford was a seriously unexpected experience.

With two tickets in my friendâ€™s handbag, a car full of camping gear and a stereo that only plays cassettes we hit the road and got there in plenty of time.

Setting up camp, I felt pretty confident. The two of us, having grown up in North Queensland were pretty accustomed to putting up a tent.

But we forgot a hammer.

Nothing will make your day like watching your girlfriend trying to bang in a tent peg with a jar of face cream.

Luckily our neighbours took pity and lent us a hammer. 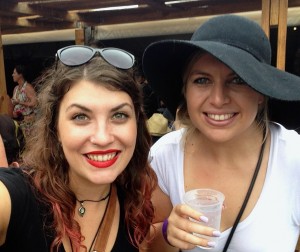 So after ten minutes of lying in our freshly made tent, dying of heatstroke and contemplating moving, we cracked open a bottle of liquor neither of us had ever tried before; Port.

Donning gumboots we made our way to the festival, past the lanterns that led the way and descended into an entirely other place.

Woodford is a winding labyrinth (if youâ€™re full of port anyway) of stalls selling foreign foods, unusual trinkets and alternative ways of living. Passing through these streets is like stepping in and out of various childrens books.

Go down one street and come across a pirate ship selling all vegetarian burgers, a little further and a tarot reader sits under shady trees in a blue cage filled with velvets and silks. Travel on up the hill and find a bar made of cane in the shape of a pineapple that rains down with incense-infused water.

Every bar, stage, stall and street is its own little fairy tale.

Winding our way up and down every little nook and cranny of the festival, Genevieve and I gorged ourselves on Yakisoyba, Langos and Govindas vegetarian food, washing it all down with ciders, glasses of sangria and drinks that came in small plastic pineapples.

Feeling completely wrapped up in the scene and the unusual music that poured from every corner of the festival we wandered into a henna tent and signed up for some temporary ink.

A word of caution; pick from the damn book.

Genevieve and I lay down under lavish hanging silks upon a huge pile of pillows. Being of the slightly intoxicated style, we both asked for what we wanted. I wanted a half crescent moon on my chest. Perhaps with a little embellishment, but I didnâ€™t really mind. Gen wanted BEYONCE written across her chest.

What happened? Well, Gen had BEYONCE written across her chest and I ended up with a jellyfish on acid. 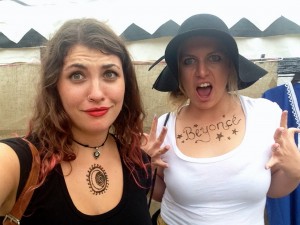 Rad. We paid for that.

So, knowing the only thing to do was keep drinking, we headed back down to The Bohemian Bar that boasted the best sangria. If nothing else, Iâ€™m a problem solver.

Skip ahead a lot of eating, drinking and getting lost we have ourselves witnessing a freakshow with the most attractive sword-swallower Iâ€™ve ever seen and two girls throwing themselves out of the tent and trying to remember how to breathe.

The hours flew by and soon Gen and I began to make our way up to the Amphitheatre where everyone had recommended we experience the final stroke of the year.

Being side-tracked by a Latin dancing class, 11:30pm was suddenly upon us. Music was stopped, speaking was silenced and candles were passed around. Three minutes of silence fell upon the entire festival and to say that silence is deafening is an understatement.

Walking with everyone under an enormous cane structure towards the Ampithertre was insane. The stage held thousands of people. Glow sticks, sparklers and flags were everywhere.

Making our way to the front, a Scottish folk band by the name of Peabog Faeries led us into the new year. Boy, oh, boy did we jig.

Thousand of people laughed, danced and twirled their way into the new year with a countdown that led to the most incredible moment I have witnessed in a long time.

Thereâ€™s a lot of love going around at Woodford Folk Festival.Â  Iâ€™d recommend it to anyone.