Les Misérables is a French movie about police brutality, poverty, and being black in France. The film evokes the iconic Victor Hugo novel Les Misérables reinterpreting the French tale of revolution through the lens of modern black French teenagers.

The film opens with a group of black children draped in the French flag proudly and patriotically singing, what I assume, is a French anthem. Before we get the first plotline, before we hear the first dialogue, this scene plays for about five minutes. Though this film is entirely in French this is the last scene that resembles the images you conjure of France within your head. Instead, the film spends more of its time in the ghettos of France, where roads are cracked and out of repair, and large daunting public housing looms with small and cramped apartments inside. Where money is hard to come by, and most noticeably almost everyone is black. 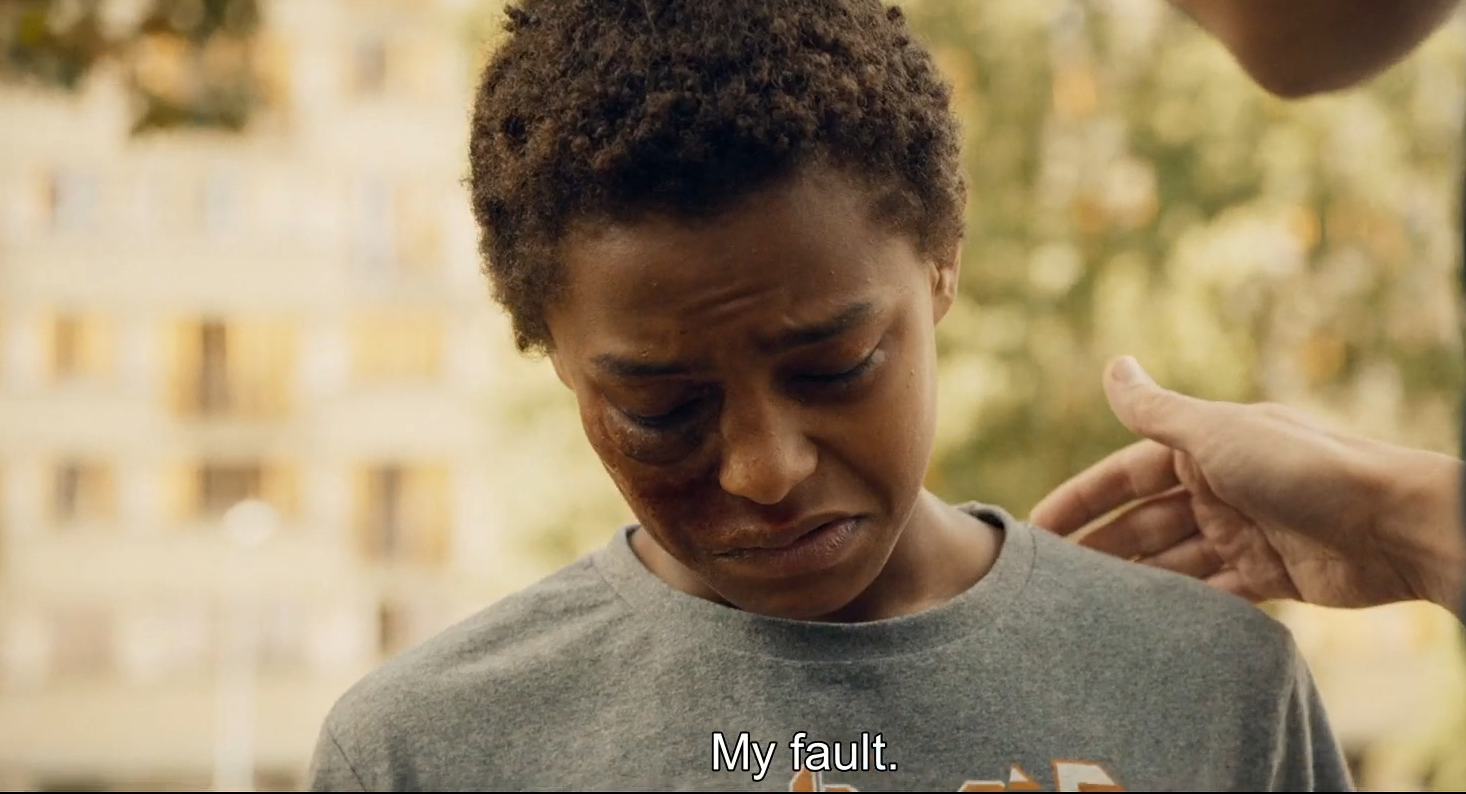 The story follows a day in the life of three cops. Stéphane (played by Damien Bonnard) is the new addition to a duo team of Chris (played by Alexis Manenti), and Gwada (played by Djebril Zonga). The trio is sent on a number of patrols or missions, with Stéphane having to come to terms with the brutalizing and traumatizing nature of what these cops are doing to these communities. These cops are neither “law-abiding” nor bad at their jobs. Chris, the leader of the unit, is a particularly nasty man with the nickname “Pinky Pig” which he has fully embraced. He is also the only of two white main characters. Stéphane is the second.

This movie feels more like a visual mural than a movie. I really enjoyed the robustness of characters the movie was able to dig into. In this way, it is quite similar to its titular original work. There are no characters within this film who are one-note and the film constantly muddying it’s moral waters, seemingly wanting you to look at everything in total with no judgement. Though that should not be mistaken, for the film having nothing to say, for me the film’s stronger messages are hidden in the details. 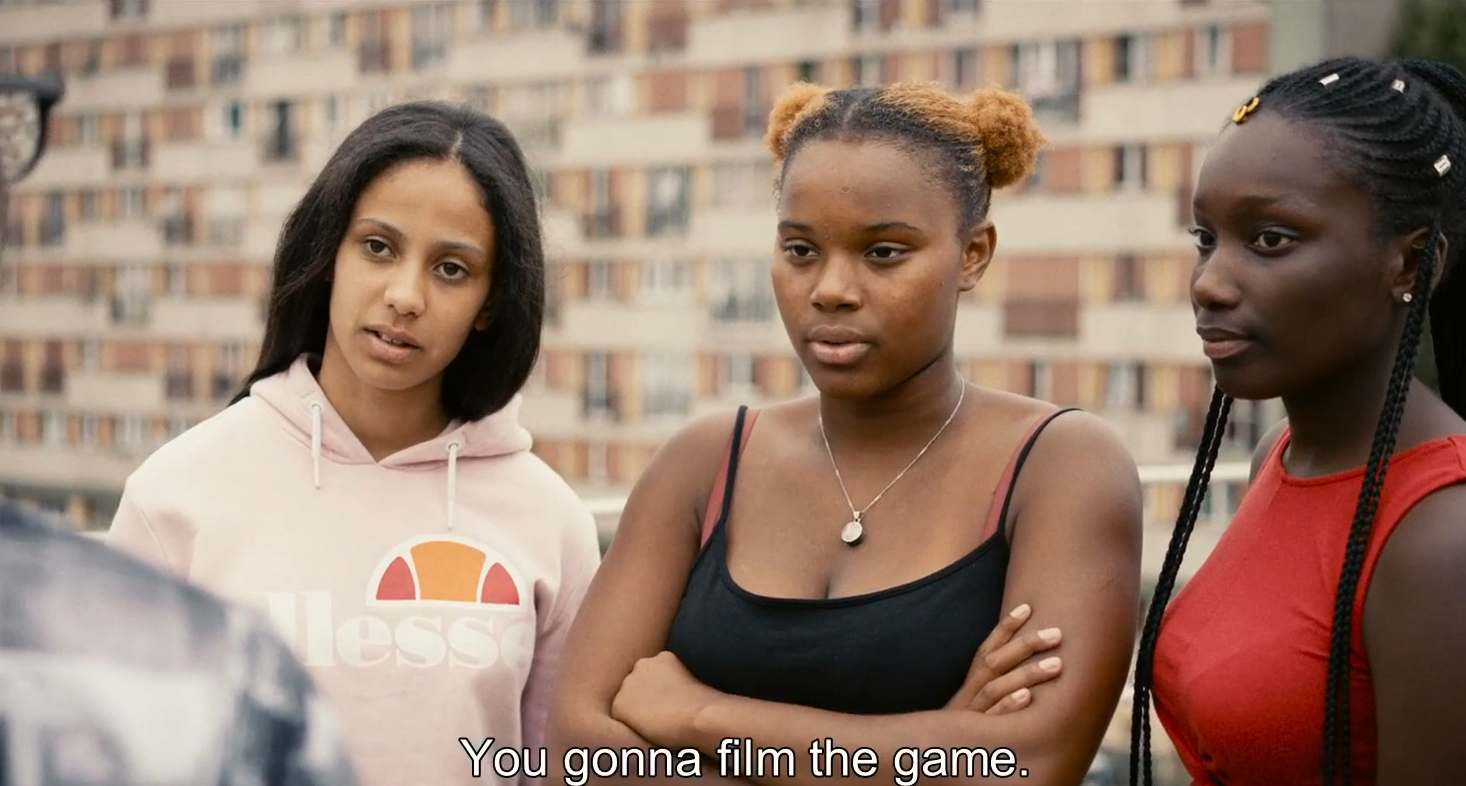 For example, Chris sports a Venum t-shirt for the entire film (none of the cops wear actual cop uniforms just guns and bulletproof vests). In nearly every scene Chris is in, he wields the most legal authority, even over his partners and he knows it. He walks around constantly ready to snap, bite, and sting to get his way, and he never really sees consequences from this. He also has a mixed-race wife. He also lives in the nicest house of any character within the movie. He’s married (to a mixed-race woman), an (albeit only seemingly) good father, with some (incredibly small and fleeting) moments of at least internal self-reflection. It’s a depiction of a cop that cuts to more realistic truth about how police brutality can be so divorced from a police officer’s perception of themselves. Stéphane jokingly implies Chris thinks he is some kind of cowboy to which Chris replies “You don’t get it, it’s not an act”. This quote is then followed by essentially the rest of the movie where the primary “villain” they are hunting is a group of black teenagers who threaten to expose them and their actions.

This movie is particularly brutal to bodies and the spirits of the group of teenagers it opens with.  Whether by the cops or local leaders, the children are exploited, tormented, and beaten throughout most of the film. So much so you almost have to forget they are children or else the nuances of these adult characters ring hollow in comparison to the damage they are causing these children. This is intentional and one of the more compelling feats of the movie. The film doesn’t indulge in clear visual or audio cues to add emphasis on where the audience should place their empathy. You have to decide for yourself.

Overall, I really liked this movie. I like the concept of the revolutionary spirit of France being handed down or evoked by its most underprivileged. I like all the performances that are given by the film’s relatively unknown cast of actors. There are even moments in this movie that are funny, deep, and really intriguing. The films will premier nationally on the 27th August with the exception of Victoria until after they have finished their lockdown, and I recommend you check it out

The Details
What: Les Misérables
When: 27th August
Where: Everywhere Nationally (except for Victoria)