A Songstress and a Chanteuse

I know of Joni Mitchell, but I do not know her. I would recognise some of her songs but not know their names. But I do know Queenie Van De Zandt. So, when my sister invited me to see Blue: The Songs of Joni Mitchell performed by Queenie, I was in.

Queenie Van De Zandt is a successful theatre performer, singer and actress. In her ode to Joni Mitchell at the Brisbane Powerhouse – songs, voiceovers from people in Joniâ€™s life and stories recounted by Queenie (in first person as Joni) were woven together for a one hour performance. It was perfect for ardent fans of Joni and for the novice.

We started with Joniâ€™s early life, struggling with polio and it seems a disjointed relationship with her parents. We learn of her life journey as a songstress and her interest in painting. The songs of Joni Mitchell are personal and revealing and even in the times before social media, she too struggled with opening so much of herself to the world. 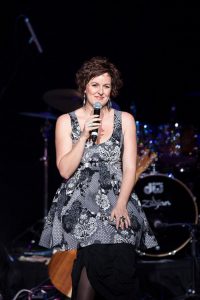 The song Little Green is a recounting of Joniâ€™s experience of giving up her daughter for adoption. Queenie herself is emotionally affected during the performance. At the end of the show we learn that poignancy of the song is resonating as Queenie has a 4-month-old daughter.  This personal reveal to her audience shows Queenie to be as open as Joni Mitchell herself.

The musical performances were fluid and well arranged. It was especially impressive as the group collaborated on the show via long distance with the musical director Max Lambert, Queenie and musicians living in separate cities. It was a great pleasure to see Queenie performing again.

Fitting in with Misfits