When Death Enriches Life - a talk with Sarah Winch

“Okay, sh**’s happened, my number’s up – now what are we going to do?” Writer, healthcare worker and ethicist Dr Sarah Winch talks to us about how we can plan in the face of the inevitable for the best death possible.

Eight years ago, Sarah Winch’s husband Lincoln received shattering news – late-stage liver cancer at 48. With a long background in end-of-life care, she was better-prepared than most for the road ahead. Eight years later, she’s the author of Best Death Possible and facilitator of Brisbane’s Death Cafe this Sunday at Metro Arts – bringing people together for honest, open conversation about death.

I meet Sarah Winch in a sunny corner of West End staple The Three Monkeys. For the next hour, she will be my guide through the world of death literacy. She sips a milkshake and hands me a copy of her book Best Death Possible.

“I’d wanted to call it Dying For Dummies, but apparently they’ve got that copyrighted,” she says of the title.”

Originally trained as a nurse, Sarah’s work with end-of life care began when she experienced the death of someone close to her at a young age. “I did a lot of palliative care then I moved into research and didn’t do much – and then my husband was diagnosed with cancer.”

The couple were relatively well-prepared for the legal and emotional ins and outs of a death, but as Lincoln himself stated, not everyone is. “As he was dying, he saidÂ  “I think a lot of people don’t know all this stuff about planning, and what to do- you should write about it,”

As a friend later said to her, “We had a birth plan – why not have a death plan?” 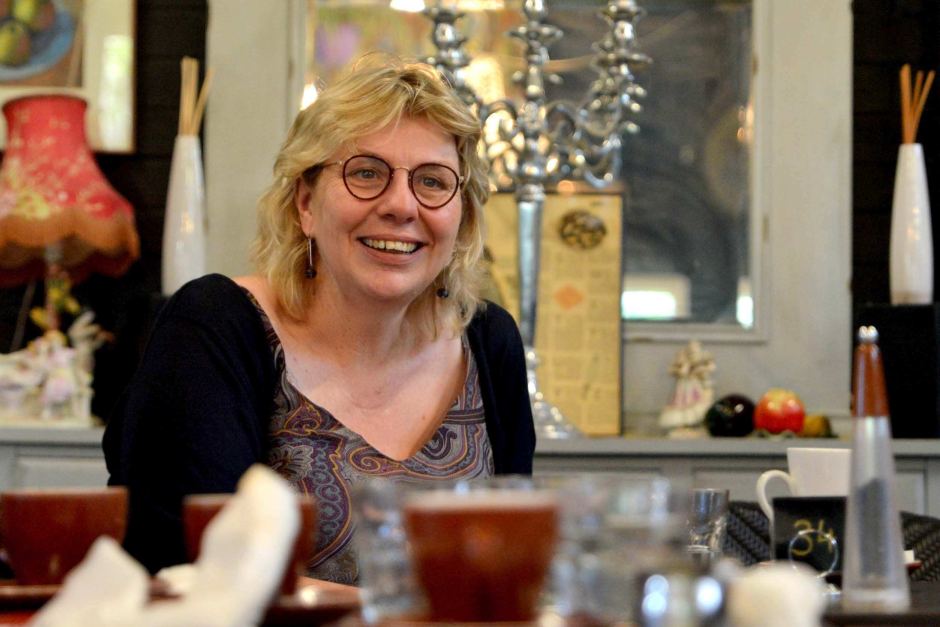 “There are a lot of ways of having a good death in Australia but one of the things we don’t talk about a lot is death itself, and that it’s going to happen to everybody – hopefully later – there are a lot of people who get a terrible diagnosis and they haven’t really thought about what sort of death they want.”

Lincoln chose not to undergo treatment, but to spend his last four months amongst nature, and with friends and family. “He wanted it very low-key,” she says.

After Lincoln’s death, Sarah and her friends formed the Lincoln Winch Institute for Healthcare Ethics, devoted to improving the death literacy of Australians. She also teaches ethics and law to healthcare students at the University of Queensland.

In Victorian times, people traditionally died in the home, but with advances in medical care, patients often die in a hospital bed, sometimes after months of treatment.

As in many Western countries, Australians lead privileged lives, and don’t think about – or talk about death until they’re faced with it head-on. We should all write wills, but who wants to think about that?

“Some people just can’t face it, and say “I’ll just leave it for the next person after me.”” she says.

We discuss the industry built around death, and the thousands – often into the tens of thousands – it can set families back to bury their loved ones, these days driving a movement for community-based “green funerals”.

“We’ve got a lot of ideals over what we do do with bodies. Lincoln wanted to donate his body to science – and in actual fact the uni didn’t want his body because it was too full of cancer – so in the end he said “Just leave me in the wheelie bin!”. I said we couldn’t do that, there were occupational heath and safety issues around that , but I think if we’d had a bit more time – he thought there was an industry around funerals that he didn’t really want to partake in.”

I suggest that this could be part of a motion towards a more secular way of dealing with death, as society moves away from organised religion, and she agrees vehemently.

“I guess the churches are always talking about Easter and the resurrection and you have this sense of finite life and infinite life – but people are just talking about how they want to die, or how they don’t. I’m very careful with that, because people have very deeply held beliefs and whether they’re Buddhist or Catholic, or pagan, I’m just very respectful of that.”

Death Cafes are run to encourage free-form discussion about death over coffee and cake. Sarah usually starts things off by talking about her own experience, alongside her co-convenor, Hummingbird House’s Fiona Hawthorne, while people may share one at a time or move off into small groups.Â  Sarah advises me that they are not, however, a place for those who are still grieving from recent loss.

A Death CafÃ© can be more versatile than you might think â€“ Sarah tells me about a lady who came to speak of her niece, a trans women who had recently transitioned. â€œIâ€™m happy I have a niece now,â€ sheâ€™d said, â€œBut Iâ€™m grieving the loss of my nephew.â€

“There’s a sense of biographical death which we don’t acknowledge very well at all,” Sarah says.

Someone had posted about David Bowie’s death on the Death Cafe Facebook event, and we talk of how he produced one of his greatest creative works while, like Lincoln, living out his last days with cancer.

“If we all knew how long we had, and I can remember saying this to my husband, before he got his tumour – am I living the right life? If I was living the last twelve months of my life, am I living the life I want? We can’t all have a perfect life, but we talk about a deep-flourishing life, and Aristotle’s concept of egomania. It’s not sex, drugs and rock and roll, it’s living the life I feel that I’m doing my best. So, that’s the philosophical side – that death makes us live a better life.”

I asked Sarah what she’s found people were least prepared for throughout the process of death. Most of us, when faced with death, want to go out with as little pain as possible, either in their sleep or at home, surrounded by their loved ones. As Sarah says from experience, however, it’s not always that simple.

“Once you get sick and you lose the ability to make your own decisions, you can fill out a document called an advanced health directive, stating that once you lose your capacity for decision making and to be rational, you don’t want to have CPR, or you don’t want to go into intensive care – what we found is that people don’t have them.” She relates this back to people simply not wanting to talk about what happens at the end.’

As well as familes, she’s found that healthcare workers, too, can be reluctant or upset by talk of death. “They’re not there to end lives, they’re there to save lives. Studies show that people with high levels of death anxiety are drawn into healthcare professions, to try and overcome it – but you can’t! People still die, and you have to engage with the patient. It’s about saying if this isn’t one of my strengths, I’m going to refer you to someone else, because it’s just too important.”

Someone who can help a family through a painful death is a death doula. “It stems a lot from the beginning of life movement,” she says. “You’ve got birth plans, teaching mothers, and then think of what we’ve got for the end of life- one little book in Australia! “No deep breathing, no “bring your partner along”, nothing.”

“It must be so terrible to have an end-of life diagnosis and then be so full of fear that you don’t enjoy the last few months of your life,” she says. 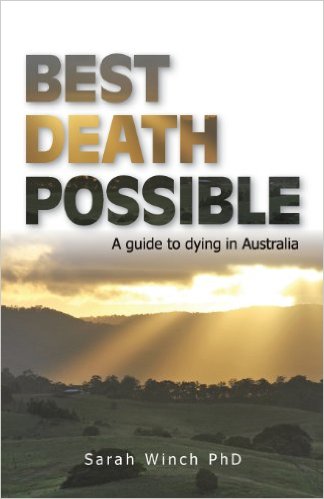 In Sarah’s experience, people – even Lincoln, as a result of the many deaths he’d seen onscreen as a movie buff, had a very fraught idea of how death arrives. “I’s usually a very peaceful process – we’ve got to alleviate that fear that you’ll go crazy or in terrible pain, or lose control of your bladder or bowels, but that can all be controlled.”

Though it was obviously difficult to harness such a painful time into a book, Sarah says there’s been massive interest in her book, the first of its kind – currently out of print due to limited availability.

“It was very difficult to write – I am looking at doing an expanded edition, which will be easier. Lincoln’s been dead forÂ  8 years, on April 19th, and it took me five years to write that. It was 50 000 words initially and I chopped it down to 20. It was very difficult to get something that was useful for people. I thought I was going to be crying anyway.”

She says the language people use to describe cancer can also be “hugely problematic.”, referring to “fighters”, and “survivors”.

“The language is very militaristic – Lincoln wasn’t not a fighter, but he was into quality of life. He’d said “You know, I’m dying” – they offered him a high-powered radium to his brain – but he just wanted to go for picnics, and ride with his mates.”

“If he had gone ahead with he treatments, we wouldn’t have had that time.”

Sarah’s work in encouraging free-form conversation on death and dying is boundless. Further down the track this year, the Death Cafe format will be expanded into Australia’s first Death Festival at Metro Arts, which Sarah talks about eagerly. “It’s going to be amazing – we’ve talked to Jo Thomas from Metro Arts, who’ll be producing it.” On the menu will be circuses, art, music – several Death Cafe, and a Before I Die wall, where patrons can display their wishes.

With Death Cafes occurring worldwide, and more and more regularly in Brisbane, Best Death Possible is a big part of an important shift in how we talk about death, and Sarah a wise and helpful voice for those faced with sudden bad news.

“Some of it is very very practical,” she says of her novel’s content. “People didn’t know you could say no to treatment, and that you won’t be abandoned, you’ll still be cared for. The central message is – which is the lesson I had to learn – was that it’s the dying person’s choice when they want to die. I would’ve liked Lincoln to have more treatment, obviously, but he didn’t want to have it. I thought “Well, you could’ve hung on a bit longer, quite frankly!” But it’s not my choice, it’s his choice. You have to say “This is going to be your journey – how do you want to do it, and I’ll support you.”

What: Death Cafe
When: Sunday 6 March, 11am
Where: The Basement, Metro Arts, 109 Edward St
Cost: $20
More Info: Book online or RSVP on Facebook