Michael Eisner wrote this in 1981, whilst he was president of Paramount Pictures. Three years later, he was CEO of Disney, and brought his philosophy with him.

Eisner was CEO during Disney’s renaissance, the period where Disney returned to the form it had once been during the Walt Disney Era (i.e. the time where Walt Disney himself was overseeing the company before his death). So clearly, Eisner’s philosophy was effective and the company was once again dominating the animation game. Bob Iger, the current CEO of Disney, has had similar success, with his acquisition of Lucas Films, Fox and the Marvel Cinematic Universe, but he has also had great success with Disney’s own films.

However, there is a distinct difference between Michael Eisner’s and Bob Iger’s Disney. Michael Eisner’s infamous quote from his 1981 memo continued ‘In order to make money, we must always make entertaining movies, and if we make entertaining movies, at times we will reliably make history, art, a statement or all three.’ Although Eisner’s top priority was to turn a profit, he clearly understood that quality resulted in success, and that talent and effort is required to make quality films. It is obvious Disney had a dedicated and talented staff when you look at Disney’s portfolio in the late 80s and 90s, which included, The Lion King, The Little Mermaid, and Beauty and the Beast, the first animated movie to be nominated for Best Picture at the Academy Awards. In Iger’s era of Disney remakes, what seems to be most important is nostalgia. Disney has realised that remaking its classic and most popular movies will guarantee two things: a young audience, as is usual with Disney films, and an older audience, who want to relive their childhood with new releases. By focusing on remaking their most beloved films instead of creating new stories like Frozen and Moana, Disney are prioritising profit over originality and creativity. 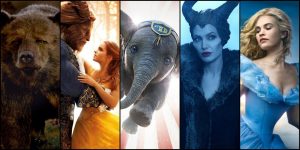 Am I being harsh? Are these remakes offering anything new? At first, yes. One thing that can be said about the early Disney remakes is that they’ve approached the stories from a different angle. Maleficent was Sleeping Beauty from the villain’s point of view. Alice in Wonderland was completely different from Disney’s 1951 version. But this approach was dropped quickly, and now they are opting to recreate their films almost line for line, and song for song. This is a big mistake, as Disney live action films have been stripped of what makes the originals so great: the animation. As can be seen with Alice in Wonderland 2010 and Maleficent, choosing to approach the stories using darker themes works much better with live action. Offering nothing new in terms of the tone and story only makes these new adaptations look extremely dull and lifeless compared to their animated counterparts, which is the biggest problem with Aladdin 2019.

Visually, Aladdin was shockingly underwhelming. The town of Aqaba looked like a stage set in comparison to the bright and beautiful animated city in the 1992 version. The cave of wonders, which in the 1992 version of Aladdin emerged dramatically and memorably from the sand, was just slapped onto a random wall in this version. Abu the monkey looked terrifying. He was no longer the sassy side kick, but just a scary prop. The direction and cinematography was lazy and generic, the pacing bad, they were rushing through Act 1 to get their most profitable star, Will Smith, on screen, and the acting, well, let’s just say there were laughable moments. 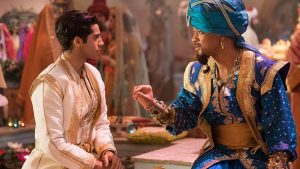 The casting was in some parts good, but in others, it was bizarre. Jafar, who is one of Disney’s most ominous and iconic villains, was played by a 36-year-old model-looking actor, who was so wrong for the part. Jafar’s whole character is a threatening, scary, older man, and I have no idea why Disney made this casting choice.

Naomi Scott and Mena Massoud both delivered good performances, but surprisingly, Will Smith’s genie was the best thing about Aladdin 2019. Not because anyone expected a bad performance from Will Smith, but because any new incarnation of the character would be naturally compared to Robin William’s super charismatic genie. However, Will Smith brought his own charisma to the genie, and he really sold it. My favourite moments were when the genie was on screen, as they were by far the most entertaining and funniest (in a good way). As far as character design goes, it has already been unanimously agreed that Will Smith’s genie is unattractive, but when a little girl began crying in the cinemas because genie came on screen, I knew Disney had messed up.

One moment that particularly stood out to me was when Aladdin confronted one of Jasmine’s suitors outside the palace. In the animated version Aladdin is tossed into the mud, and the man mocks him for being a ‘street rat’ in such a menacing, condescending way, and in one moment encapsulates how the wealthy treat the poor, and how unjust the class system is, which is one of the main points of the movie. In the live action version, the suitor is played by an actor who shows such little enthusiasm, it actually made me laugh. The line, that was delivered so well in the animated version, was so underwhelming, and I think that one moment sums up the whole of Aladdin 2019: underwhelming and careless. Why bother putting in effort when you know nostalgia is guaranteed to turn you a profit? 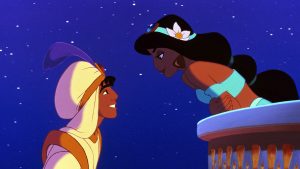 It is simply impossible to capture the magic and flare of the Disney animated classics in these remakes because animation by nature allows so much more visual creativity. Characters cannot move as gracefully, scenery will not be as vibrant, and the magic is lost. This is clearly no concern to Disney, who have already planned/begun production on the following remakes: Hunchback of Notre Damn, The Jungle Book 2, Lilo and Stitch, The Little Mermaid, Peter Pan, Pinocchio, The Sword and the Stone, Mulan and Lady and the Tramp. And of course the big product to be coming in 2019 will be The Lion King, Disney’s gem that grossed over one billion dollars in the 90s. I urge you to watch the trailers side by side. Of course, the animation in the new Lion King looks impressively realistic and I give so much praise to the animators but there is a reason in The Lion King 1994 the animals are animated not to look like real lions and hyenas and baboons. What range of emotion can you get from a real lion’s face?

So, if you do enjoy the new live action remakes, good for you. Films are meant to entertain, so if you are entertained, I am glad. But I do ask that you consider that there are writers out there with stories to tell, ideas to share, and the budget that could be going to their vision is being put towards films that already exist, and are already beautiful. If you enjoy the remakes because they remind you of your childhood, then I insist you watch the original Aladdin for a trip down memory lane. If you are planning to show your children Beauty and the Beast, I implore you to show them the stunning classic before putting on 2017’s auto-tuned filled, CGI mess. Encourage creativity and demand originality from Disney and then you will have your reward.