The Brisbane French Theatre brings a little bit of Paris to life in their new, original production, Alas, April.

Alas, April is The Brisbane French Theatre’s first original production performed in the Lumen Room at Metro Arts Theatre in Brisbane city. The venue itself benefited the immersive feeling of the production with the beautiful, exterior architecture of Metro Arts. The converted cinema space of the Lumen Room with its soft, antique-style cinema chairs, pulled me into my own imaginings of Paris, a place where old-world charm and architecture collide with contemporary art and innovation.

As an original production, Alas, April spoke volumes for the work The Brisbane French Theatre aims to introduce to Brisbane theatres. The production had an element of charm and endearment that drew me into the characters’ lives, an aspect I heavily attribute to the text. Written by The Brisbane French Theatre’s own Thomas E. Smith, Alas, April is a French text performed in French with English subtitles. The text attempts to balance comedic elements and lines with more heartfelt phrases to challenge the audience’s perception of love and its effect on people. However, at times the sincere phrases requiring more consideration by the audience felt direct, as in the cast were informing me on the facts of love and life without me being able to insert my own interpretations. 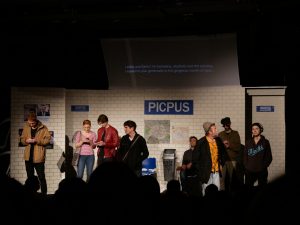 I don’t believe these moments where the text was spoken at the audience are purely related to the text. The production seemed a work that would work purely with the cast interreacting with one another, engaging and connecting onstage for the audience to simply watch. But the majority of the time the cast members faced directly to the audience while still talking to the other cast members. This breaking of “the fourth wall” occurred in a context and with text that didn’t suit the approach. I wonder how connected the case felt with one another and their characters. Though I must credit Hugues Girod for his portrayal of the “Hobo”, a character that continuously brought life and energy to the stage by a performer who seemed fully immersed in the role. 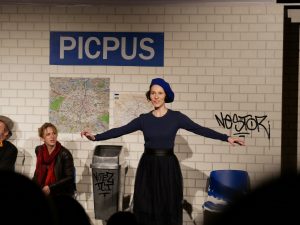 The Brisbane French Theatre has developed a unique and charming experience with Alas, April, and I’ll be interested to see what they bring to Brisbane theatres in the future.