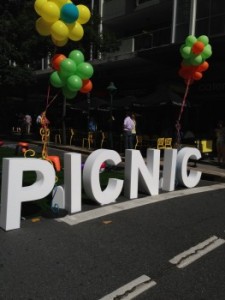 Walking down Albert Street today, you might have stumbled across URBNE’s Albert Street Picnic. Upon stumbling however, you would have fallen on astro turf, cushions and possibly a giant “Connect Four” game.

The Albert Street Picnic greeted Brisbane City’s lunch-goers today and will continue until the 17th of April. From 11am until 3pm Monday, Tuesday and Wednesday, this glorious little picnic space will be host to the lazy, the hungry, the bored and the curious.

Yuvi and I ventured down and took part in the festivities. LiveÂ acousticÂ music filled the street with a relaxed atmosphere, whilst people took a mid-day nap in the shade. AÂ photo boothÂ with props galore was a popular feature and we watched people meld their faces into genuinely crazy moulds. After a while, we strolled over to the “Ideas Centre”, where canvasses lined up one-by-one, showcasing the ideas and vision for Brisbane’s future. At the other end of the street however, I spotted an unlikely marvel. A giant game of “Connect Four” that actually required you to connect seven. There were also games of checkers, chess and other games.

If you didn’t get a chance to see it today, don’t miss out on Tuesday or Wednesday because they’ll have even more in store for you!

The Albert Street Picnic is just one of the event URBNE has organised as part of their month-long festival. Get involved and check out Brisbane’s spaces and places!