End of Suffering, released on Friday, is the bands’ third on International Death Cult, and upstages their last two in spectacular fashion. 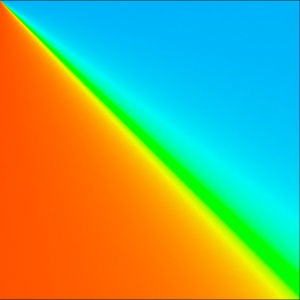 Both the anthemic sound and neon artwork are juxtaposed by Carters’ lyricism which, while at times uplifting, dwells in relatively negative themes.

Lead single and “cornerstone of the album” ‘Anxiety’ details Carter’s personal struggle with mental illness, before giving way to a rallying cry of “there’s a better place for you and me/where we can be happy.”

The lyric ties in with the band’s campaign #ABetterPlaceForYouAndMe, an initiative designed to provide people a safe forum to discuss how they live with and overcome anxiety. The music video for ‘Anxiety’ is dotted with real video submissions from fans which provide an affecting look into the band’s impact on their fans.

Single ‘Crowbar’ highlights the anthemic nature of the band – in spite of its lyrically personal nature the massive chorus is almost designed to be belted back at the band by screaming fans at festivals like Laneway.

Carter understandably carries a huge presence with regards to the band’s sound and his range as a frontman adds significant depth to the album.

His vocal performance on ‘End of Suffering’ is perhaps the closest recorded material to a Frank Carter & The Rattlesnakes live show; Carter’s ability to alternate between a relatively gentle singing voice and a taut, barely contained fury is never more apparent than on single ‘Kitty Sucker’.

This tension, combined with the band’s fuzz-laden punk rock, adds a sense of danger to the songs on the record that mirrors the live show – the feeling that utter chaos could descend at any moment.

End of Suffering is visibly the work of the same artist that gave us Gallows’ seminal punk rock record Grey Britain a little over a decade ago. Carter’s style has become more refined with every record released, and this jump into anthemic rock music is a welcome one.

End of Suffering is available to stream on Spotify.