A leetspeak variation of a word that generally means handwritten books, C()D3X is an appropriate rebrand for Brisbane producer The Kite String Tangle‘s (aka Danny Harley) latest full-length. Following his acoustic mini-album In A Desperate Moment, Harley proved his ability for songwriting and experimentation but ultimately shone a light on stylistic shortcuts he used to carry earlier works. Following sold-out tours and a residency in Berlin, The Kite String Tangle articulates his electronically-focused goal by opening C()D3X with dark and expertly crafted synths.

Lead single ‘P()L4R’ establishes this era of TKST exceptionally well. A swelling bass runs throughout the song almost like it’s slowly revealing glimpses of what could be a mysterious deep-sea creature, peppered with bright flashes of optimistic pads and curious arpeggiators. The emotionally-dependent lyrics are convincingly vulnerable throughout the song and get intensified by its production. The chorus vocals are weighed down by a gravitational downshift, desperately bouncing back to the floor with its bottomless beat.

The first half of the record continues to celebrate Harley’s melancholic themes with elaborate and cunning production. Memorable vocal lines sit perfectly between a sample-driven chorus on ‘NINON DE L’ENCLOS’, and Kateboy‘s sombrely angelic performance on ‘LANDSLIDE’ sets the height of an imminent collapse. While ‘KILLING TIME’ is a cheery song by most accounts, there’s an unsettling variety of sounds in the instrumental that soberly warns the dangers of a convenient distraction. 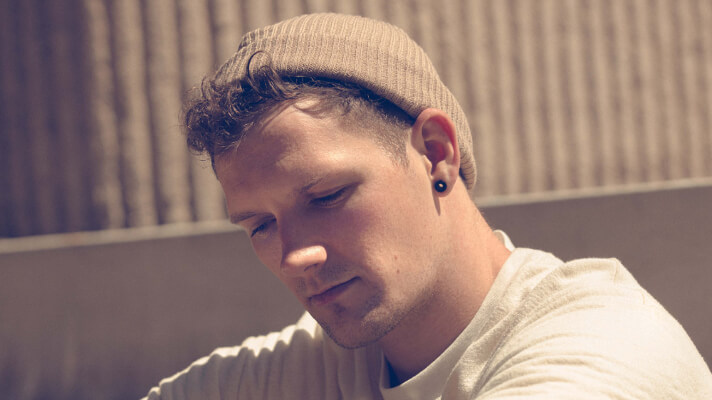 Another club-ready track on the album is ‘NORTH’, a sadly unremarkable single in a classic Kite String manner. Like saying “sorry” without admitting your mistake, the hook “I need you now” promises conviction but doesn’t say enough to be sincere; hindered further by the following “wrap your arms around me” line that clashes with the energy of the house beat beneath it. Going back one track would redeem these needless issues on the functionally similar ‘IRIS’, with its far more intriguing vocals and the chorus refrain’s incorporation of quirky organ melodies.

Announcing the album’s final act with instrumental ‘GHOST NOISE’, we gladly listen to its hopeful and ambient textures as if it was a mobile game we chose to unmute for its soundtrack. We see Harley most at-home on this record with tragic lyrics written on a synthwave mural for ‘KEROSENE’, with ‘ISTAU’ closing the curtain with wistful refrains and verses before building to an efficient crescendo.

On C()D3X, The Kite String Tangle refines his production methods and amalgamates his strengths into a pensive mood. While he hasn’t reinvented the wheel, he has reinvented himself and executed his multifocal approach at his best yet. Front to back is a cohesive listen, with all the tracks giving a sonic purpose through uninhibited beats and retains emotional purpose with well-placed hooks.

C()D3X releases this Friday 20 March, with The Kite String Tangle due to tour the album nationally in May/June.