After obsessing over Netflix documentary Cheer, we interviewed Brisbane’s own cheersquad, The Brisbane Broncos Cheerleaders. And there is definitely more to cheerleading than high kicks and pom poms.

I have many things to say about Cheerleading as a sport, mostly ‘swoon’.

First of all, if you’ve not yet watched Cheer, GASP. Second of all, to give you a bit of context, it is a series that follows a group of university students in Texas, as they prepare to compete at the Cheerleading National Championships. The documentary series has brought worldwide exposure to the sport, and now we cannot get enough cheerleading.

And so we sat down with Caitlin Armstrong and Rachel Dowse, two veteran members of the Brisbane Broncos Cheersquad, to chat about their preparations for the upcoming season as they work to support their NRL team.

We started by asking Caitlin and Rachel about how the squad is selected. “The audition this year started with about 150 applicants” said Caitlin. There are a series of rounds until the final squad of thirteen is decided. “The audition is very similar to a dance audition, but tailored to what the Brisbane Broncos Cheersquad needs” said Rachel. There is a technique round, a kick line round, a dance round and even a freestyle round. “The freestyle round is really important because on the field you need to be able to entertain, show your personality and pump up a crowd.” 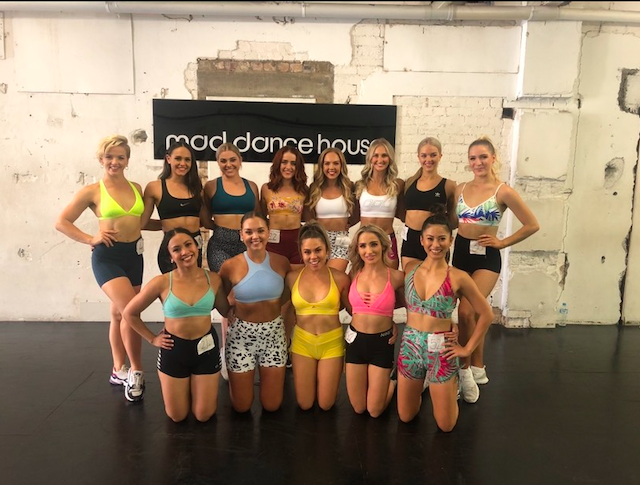 After that, the squad attends one training session per week, that is crammed full. The squad learns a new 2-3 minute routine every 2 weeks! There are pre-game routines to learn, guard of honours to learn, sideline routines to learn and end of game dances to learn as well. Rachel discusses how the squad “trains like athletes, and even though their athleticism is entertainment based, it doesn’t deter from what they do.” Behind the scenes each squad member works to take care of their bodies, keep fit, stretch and maintain technique and training. “You wouldn’t take a year off and then expect to be amazing, you continue to train yourself as a dancer and when you audition for jobs you hope that your training is up to the standard that they require for the job.”

We moved to ask about what the squad members do outside of cheerleading. With jobs ranging from lawyers, to school teachers, to business owners, choreographers and dance teachers, I mean come on, is there anything they can’t do!

As we speak with Caitlin and Rachel, they are calm, passionate and clearly driven. Caitlin, who is currently completing her final prac for her Education degree explains how she fits everything in. “I have always lived a very busy lifestyle and I always have everything on because I love it. This season I was tossing and turning about whether I have time for it, but in the end I love it and it is something I look forward to every week. I wouldn’t change it for the world”.

Rachel is a choreographer, teacher and dancer and runs her own freelance business. She explains her method to navigate the many jobs she has, is scheduling. “If it isn’t in my diary it doesn’t exist.” And this is the same for many of the girls. “Every one is so multi-skilled and everyone has so much on.” 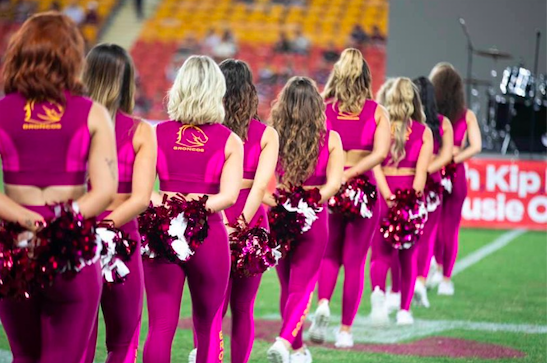 When asked about their favourite part of being in the squad, Caitlin articulates the “sisterhood of cheerleading.” She speaks about how the squad looks after one another, and of the friendships that they all develop. For Rachel, game day is her favourite part. “I love the energy of game day and getting up in front of that crowd and entertaining them and showing them something amazing.”

As our interview came to a close we asked about the biggest lesson being in the squad has given them. Both Caitlin and Rachel articulate teamwork, interacting with the different people that come to watch the games and a positive and empowering mindset and attitude. It is that work ethic and the mindset of cheerleading and its application to life that makes the sport so special.

Cheerleading, like all sports has uncanny parallels between it, and life. But a clear takeaway from cheerleading is mindset. Rachel says it best when she says, “as a squad we keep a very positive and empowering mindset, and I think it is just about taking on that mindset and applying it to whoever you’re speaking to, and in whatever you’re doing and not faltering in it.”