It’s back for 2020! Following the success of last year, the highly anticipated French Film Festival is once again gracing Brisbane screens in collaboration with Palace Cinemas.

The Alliance Francaise of Australia has been delighting Aussie audiences with the best of French cinema since the festival’s inception in 1989. Brisbane, Sydney, Melbourne, Canberra, Adelaide and Perth have all played host to the festival over the past 31 years, and its success has seen it expand now to Hobart and Byron Bay.

Boasting a massive 200 000 spectators Australia wide last year, the Alliance Francaise Film Festival is the largest French film festival outside of France, and the biggest festival of foreign films in Australia. Brisbane alone played host to 23,000 guests across the course of screenings last year. The opening night of the festival has become somewhat of a social event on the Australian – French cultural calendar, with 2019’s attendance in Brisbane alone exceeding 700 for Pierre Salvadori’s’ “The Trouble With You (En Liberte)”. 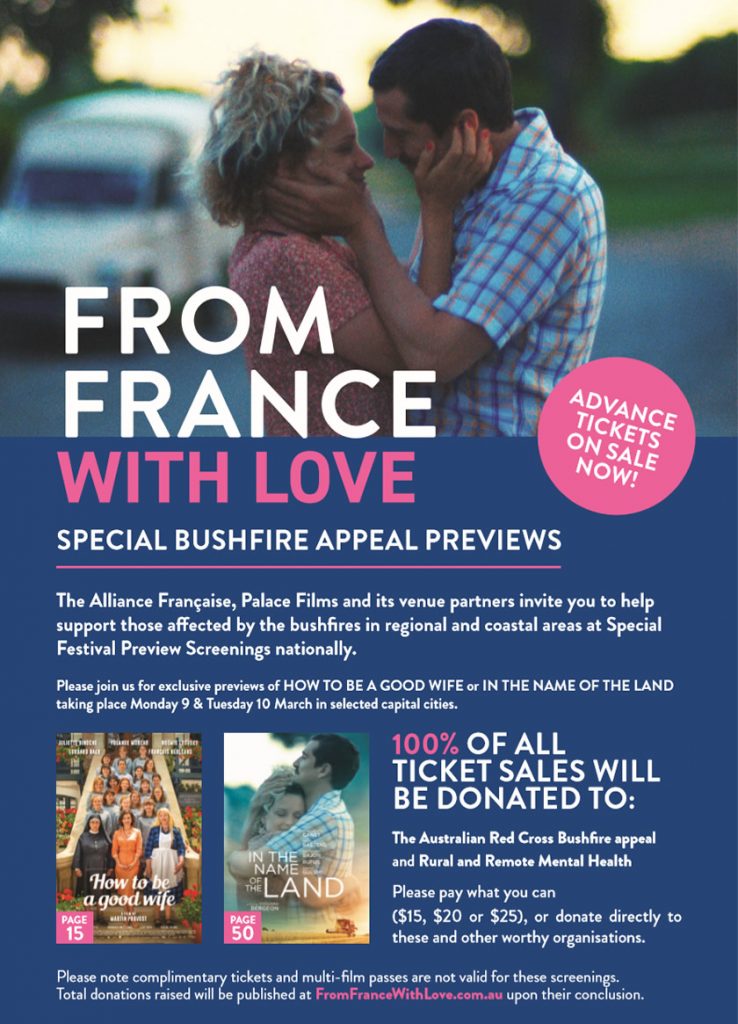 “We open this year’s festival with the film “The Extraordinary” of Olivier Nakache and Eric Toledano, the directors of “The Intouchables” and  “C’est la vie” which was our opening film in 2018. This will be a big success, I am sure! Our line-up has this year 49 films, most of them Australian premieres.

We also have two International premières. Over 4 weeks, we will have 400 screenings in both cinemas Palace Barracks and Palace James St.There are films of all genres and styles.

I am looking forward to seeing “How to Be a Good Wife” with Juliette Binoche before it is released in France and of course “Les  Misérables”, nominated at the Oscars and awarded with 4 Césars.”

At this year’s festival, patrons will be able to enjoy a veritable smorgasbord of compelling, sophisticated and high art French films, whilst also supporting causes a little closer to home.

“On the 9th March, “From France with Love” is a charity event, for the Australian Red Cross Bushfire appeal and the Rural and Remote Mental Health: We will preview “How to be a good wife” and “In the name of the land”.”

All proceeds from ticket sales to these two films will be donated to the Australian Red Cross Bushfire appeal and Rural and Remote Mental Health.

Don’t miss your opportunity to be enchanted by the intrigue, passion and excitement of French cinema; click on the link below to secure your tickets now!