Angus Gordon only began stand up 18 months ago, but has already developed a surreal, distinctive style with a surprising impact.

As well as regularly performing around the city, he runs an alternative comedy night at the Happy Cabin in West End, part of what I consider Brisbane’s underground comedy renaissance â€“ an optimistic view he doesn’t share, by the way.

Whatever alternative comedy means to you, Gordon’s performances are different, genuinely experimental and (for a certain demographic) extremely funny. 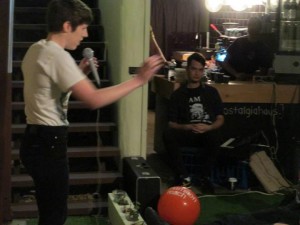 Alex Ward at The Happy Cabin. Image by Aaron Gocs.

Weird, high-brow concepts are punctured just as they take flight. He reads absurd, confessional short stories from the page, shirtless and self-consciously high falutin’ in the style of John Safran or Shaun Micallef.

It’s an ambitious approach almost entirely at odds with the pub circuit.

I shot the breeze with Angus Gordon.

CD: What’s your style of stand up?

Angus: A friend of mine described it as self-hate erotica. I started off doing more jokes, but it quickly became what it is now.

It’s pretentious, but you need to have a cultural key to understand it. If you haven’t watched a tonne of comedy, you wouldn’t get that I’m trying to play with form.

CD: How was your first gig?

It’s terrifying â€“ the failure is so immediate in stand up. As soon as you say a joke and people don’t laugh, you know straight away that it didn’t work. If it doesn’t get laughs on some level, it’s a failure.

CD: What’s your take on Brisbane’s comedy scene at the moment?

Angus: It’s got low tides and high tides because we constantly bleed talent down to Melbourne and Sydney.

We just lost a bunch of people who I thought were really good after the last Melbourne International Comedy Festival. We’ve lost a few rooms as well, so there’s less opportunity and less people doing it. 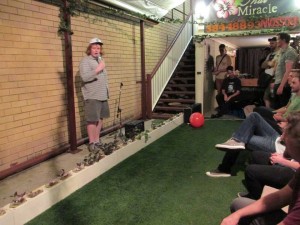 Angus Gordon at The Happy Cabin. Image by Aaron Gocs.

CD: Why did you start the Happy Cabin comedy night?

Angus: Ultimately, I want to do stand up away from traditional pub audiences.

There are people who like creative things, but they haven’t been exposed to the kind of comedy they could like. I want to put comedy on in spaces that these people feel comfortable coming into â€“ a new audience, hopefully.

CD: Any advice for aspiring comics?

Angus: Just think about what you’re saying: is there a point to this?

THAT Production presents The Eisteddfod