Acclaimed Filipino director Brillante Mendozaâ€™s 2009 film, â€˜Kinatayâ€™ is a haunting investigation into the human psyche and the depths people go to in order to provide for the ones they love.

Mendoza is not afraid to make the audience feel uncomfortable. Emotions of shock and sympathy were frequently evoked whilst viewing â€˜Kinatayâ€™. Notwithstanding an audience will admire the honest lines of communication Mendoza creates with his examination into societal-bred naivety and how it fuels our deepest fears. It is not done as a gimmick. It is done as an education.

From the opening slasher effect of the â€˜Kinatayâ€™ (Butchered or The Execution of P) title, you knew this film would challenge any expectations you had. â€˜Kinatayâ€™ followed Peping (Coco Martin), aÂ criminology student, who had just married his long-time love and mother of his child, Cecille (Mercedes Cabral). Desperate for money to support his family, Peping accepted a job offer from a friend later learning he had assisted a gang in the abduction and of a young woman (Maria Isabel Lopez) and that he had become an accessory to her murder. 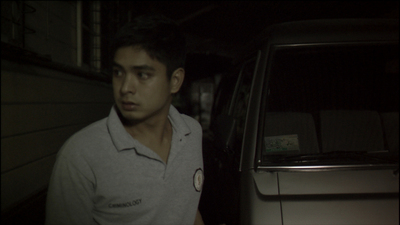 â€˜Kinatayâ€™ perfectly demonstrates the nature of filmmaking in this part of Asia and hence its selection as part of Gomaâ€™s APT8 Cinema â€˜Filipino Indieâ€™ program. â€œ’Filipino Indie’ is a survey of independent and experimental digital filmmaking from the Philippines. The program highlights an artistic turn towards experimentingâ€¦ and the creation of hybrid forms of non-fiction and dramaâ€ (GOMA). What is mystifying yet intriguing about the film is that you cannot fit it into any pre-determined genre. Mendoza borrows elements from numerous film genres â€“ documentary, thriller, drama and horror â€“ and chose to prioritise exploring the complexities of life. The temptations for people who must commit bad deeds when they arenâ€™t necessarily bad people.

The film can be regarded as holding a double meaning as Mendoza has given countless interviews discussing how his countryâ€™s government funding agencies seek to instil propaganda into films. One could conclude from the corruption of authoritative figures depicted and the observational stylised cinematography; the filmâ€™s gritty landscape gave perspective into how a sordid underground can taint domestic spaces. 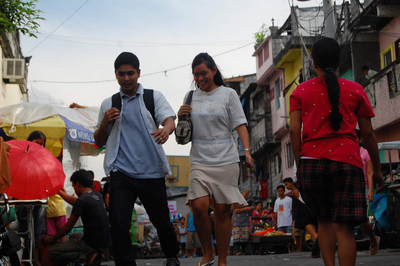 The film dedicated at least the first two acts to exposition, allowing the audience to understand Pepingâ€™s motivations and then his regrets. By rewriting the traditional narrative structure commonly used in Western films, one which Australian audiences know well, Mendoza produces voyeuristic vignettes that break away from the main storyline to introduce secondary characters, their worlds and circumstances and their pathway to the inciting moment.

â€˜Kinatayâ€™ was met with controversy when it premiered at the Cannes Film Festival. Despite this, Brillante Mendoza won the Best Director award at the festival.

â€œMy goal with this film was to take the audience to the next level of fear â€“ to fear not only what they recognise as danger, but also the dangers that they’re not aware of.â€ â€“ Brillante Mendoza.

The Filipino Indie program of the 8th Asia Pacific Triennial of Contemporary Art at GOMA runs until April 8. For more information about whatâ€™s going on at APT8 click here.

Takeaway gets real at Homeslice Kitchen

The Hills Are Alive with the Sound of Success