It is in the forgiving that we are forgiven.

“Muallaf” (also known as “The Convert”) was shown to local audiences as part of GOMAâ€™S APT8 exhibition. Within the Pop Islam program, “Muallaf” demonstrates representations of the contemporary Islamic world, showcasing the thin line between interpretation and manipulation. A world â€œwhere young people in particular, shape their own distinct version of religious practices and institutions and re-imagine their possibilities.”

“Muallaf” is a 2008 Malaysian drama film by the late Yasmin Ahmad. The filmÂ is a departure of Ahmadâ€™s known authorial style, as it featured mainly English dialogue and also favoured a Chinese title card symbolizing oneâ€™s trust in God instead of using an Islamic verse. 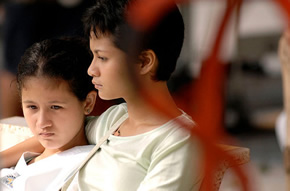 What I found especially interesting about “Muallaf” and applicable to other films in the program, was the auteur-style, independent and low-budget filmmaking that offers audiences different experiences and changes the filmâ€™s motivation beyond simple entertainment purposes. Film-makers from this region act as social commentators and itâ€™s their fearlessness in defying or agreeing with religious or proper beliefs that adds depth and honesty to their stories.

Ahmadâ€™s works, have included the “Orked”Â trilogy, “Sepet” (2004),Â “Gubra” (2006) and “Mukhsin” (2006)Â and study the human condition and itâ€™s close but fragile bond with humility. Her films explore romance between members of different faiths on a Malaysian backdrop of diverse ethnicities, traditions and social expectations.

This film focuses on three characters. Sisters Rohani (Sharifah Amani) and Rohana (Yeo Yann Yann) take refuge in a small town whilst evading their abusive father. When the girls are introduced their daily routines were like anyone elseâ€™s â€“ striving to build a better life. At first their past remained a secret but Ahmad hinted to past wrong-doings through character details and interactions. The third lead, Brian Yap, portrayed a school teacher at Rohanaâ€™s school who had his own closet full of skeletons and family issues. The friendship that was struck up between these three characters that not only made room for acceptance by others but also of themselves, allowing them to find a new understanding of faith, love, friendship and family. By consoling each other, facing the past seemed less daunting and running no longer a necessity.

Whilst dealing with serious themes and topics, Ahmadâ€™s script managed to weave subtle moments of humour in everyday occurrences. This allowed the audienceâ€™s to connect more with the subjects on the screen and discover a new appreciation for how people can deal with adversity. Common misconceptions about both Western and Eastern worlds are stripped away.

“Muallaf” brought you to a crossroads in the ‘game of life’ â€“ acceptance, knowledge, ignorance or safety â€“ which path would you choose and which path chooses you?

Muallaf will be screening at GOMA until the 10th of April.Â For more information about whatâ€™s going on at APT8 click here

Titanic: The Movie The Play Prepares to Set Sail

Fortitude Valley’s TRYP Hotel – The only reason to stay in for a movie night.