Performed by Daniel Cabrera and presented by Kate McDowell as part of the Wonderland Festival at the Brisbane Powerhouse, Who is Dani Cabs showcased all of his talents (self-admittedly thereâ€™s not many).

The show opened with a blanket-covered man maneuvering his way between audience members whilst making moaning and kissing sounds. This was Dani Cabs. An hour later, the audience were dancing around the stage with him over orange peel scraps. So, how exactly does Dani achieve this? He stands on stage in nothing more than an orange poncho and tightly fitting underwear as he reveals his fears and expectations of the world around him.He is charming, outlandish and passionate.

We learn about his mother’s unconditional love, his naked antics from the previous weekend and his desire to keep on challenging his personal image. Who is Dani Cabs? Is an exploration into the life of the eccentric and hilarious entertainer. Do not expect to understand everything that Dani Cabs throws at you (literally, he really does throw things). Instead, take a seat and clear your mind.

Dani Cabs doesnâ€™t want to separate himself from the audience. This creates a unique viewing experience as he becomes friends with each and every person of the audience through humour and some sexually suggestive dance moves. 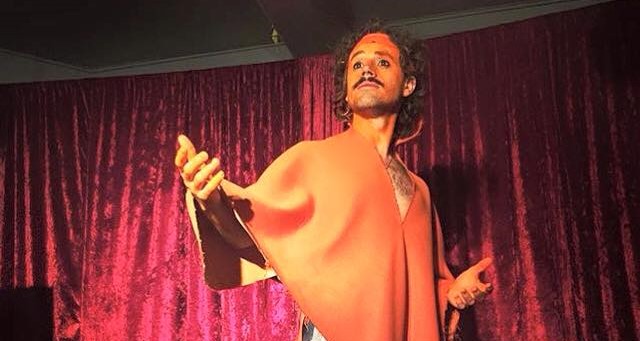 Dani Cabs knows that his show is not for everyone but he relishes in the fact that it stands out from the average theatre show. He admits to The Creative Issue, “My show isn’t scripted, it can be one thing one night and something totally different the next, and this is especially dependent on the audience.” The show last night was heavily dependent on the fact that majority of the audience already knew him. He appeared relaxed and energetic performing before the audience. Even if you didn’t know Dani Cabs personally before the show, you sure felt like you did at the end.

Who is Dani Cabs? Is honest, raw and surprisingly entertaining. After all the chaos and bizarre dancing, I still donâ€™t know exactly who Dani Cabs is but neither does he. For only $25 a ticket I would strongly suggest to see the show before it leaves Brisbane. Word of advice: it doesn’t matter where in the audience you sit, Dani Cabs will touch you. What is even more frightening is that you might just like it.

What Who is Dani Cabs?

For tickets or more information, head over to the Brisbane Powerhouse website here.