Bandito Folk and the Concrete Island

â€œHe, himself, crawled about on a forgotten traffic island like the nightmare of this slumbering continent.”

Indie rock group, Bandito Folk draw inspiration from the pages of J.J Ballardâ€™s Concrete Island, a tale of a man trapped in the confines of his own civilisation.

The band’s latest EP titled the, ‘Embankment’ marks the beginning of a marathon musical journey.

Set to be released November 15,Â ‘Embankment’Â is the first of the three part EP collection based on the ominous themes of ConcreteÂ island, all due to be produced and recorded within just 18 months.

â€œWe really like to focus on the imagery that is created by our songs, and feltÂ J.J BallardÂ was a good fit,â€ said front man Josh Tuck.

Describing theÂ new tracks as, something you would drive to or drink alone to (mutually exclusively I was assured).

The hauntingly aromatic undertones of the 5 piece band do indeed paint a slightly foreboding picture of an escaping landscape and open roads within the minds eye.

Despite containing the classic recipe of guitar, bass, percussion and keyboard, Bandito Folk seem to have slipped in an unknown special ingredient, giving them an ability to pull on the subconscious unlike many others.

â€œWe don’t do cheery unless we are taking the piss,” said Josh. 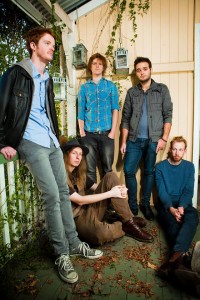 This latest collection was recorded at Applewood an old church situated on the outskirts of Brisbane, which proved to be quite a scene change for the boys.

“It was a whole different mood recording our there, we got to play cricket and drink tea during the takes,” said percussionist Zander Hulme .

“We were used to recording at QUT Gasworks, which were always short sessions.

This time was had the opportunity to relax a little more,” said Aled HumphrysÂ  on keyboard.

Meeting at university over four years ago, Bandito Folk have created a platform of die hard supporters and dedicated friends, filling out the Black Bear Lodge at the launch of their last EP, ‘Please don’tÂ smile at strangers.’

The boys have also made an appearance at the Brisbane festival for the past three years, making them fairly old hats at the live gig game.

“We have enjoyed growing up with the festival and have gained a bit of familiarity from it,” said Zander.

“I have found our process of writing has become more refined over time,” added Josh. Who’s process begins with imagery which is then expressed through theÂ music, adding lyrics towards the end of the development phase.

Bandito Folk willÂ continue toÂ capture the best of both the visual and musical world at the Gallery of Modern Art.

App of the month – Whitagram