BeyoncÃ© at the Brisbane Entertainment Centre

Queen Bee, otherwise known as BeyoncÃ©, wowed the Brisbane stage with her Australian leg of the Mrs Carter World Tour.

With an 11 piece all female band, an array of back up dancers, The Mamas as the astounding back up singers and the Parisian Les Twins break dancers all as support.

Mrs Carter opened with â€˜Run the World (Girls)â€™ and continued with a mix of her old and new hits.

However, her musical prowess clearly blew audiences away with the amazing â€˜Love On Topâ€™ and â€˜Haloâ€™.

BeyoncÃ©â€™s voice is something only one can truly grasp the sheer greatness until hearing her belt out those tunes live. 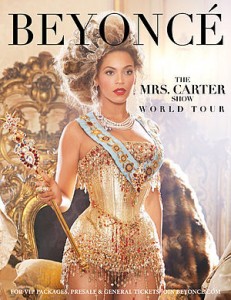 On top of her vocal genius she can dance her booty off for over two hours and still look gorgeous!

Seeing the famous â€˜Single Ladies (Put a Ring On It)â€™ dance definitely was a highlight.

Mrs Carter also had nine costume changes with many designed to channel past Queens like Marie Antoinette, Cleopatra and Elizabeth I.

With the exception of a few dresses and a sequined skin-tight jumpsuit BeyoncÃ© stuck to embellished leotards and bodices that showed off her famous curves.

Between each song the audience was kept entertained with different visual clips.

From BeyoncÃ© as a stylised Marie Antoinette, an old 60s airplane commercial, an African tribal leader to the final clip showing a montage of her life, including the adorable baby, Blue Ivy.

By the end of the show I felt a huge connection to this astounding performer, who obviously was so gracious to her fans and the entire team supporting her.

Her final closing number was a huge thank you to everyone on stage, back stage and a small bow from the Queen herself.

After attending many concerts myself I can truly say BeyoncÃ© has been the most astounding.

It was so refreshing to see a performer who truly lives up to her name.

Someone you can tell has continued to work extremely hard throughout her life to build her talent and wow audiences around the world.

She is not only a singer but also a role model for all women.

For a preview of her concert see the video below.

Thanks for such a fantastic night Queen Bee!

DIY: fascinator for the races!