All manner of wonders exists on the fringes of our galaxy, unfathomable worlds tucked between the stars, and thanks to S’Witch Collective, we’ll soon get to experience a handful of wonders through the medium of theatre.

From the 11th till the 14th of April, S’Witch Collective will play host to nine interstellar performances across the four days, at three venues, for the inaugural Brisbane Sci-Fi Theatre Festival.

S’Witch Collective has previously produced a number of works spanning many theatre festivals in Brisbane, from Short and Sweet to Anywhere Theatre Festival.

S’Witch collective themselves being no strangers to the weird and wonderful imaginings that embody the sci-fi genre, having played around with the concept of combining sci-fi and live theatre with their production Terra-fied! being met with abundant enthusiasm and sold-out shows at Anywhere Theatre Festival in 2018.

The Brisbane Sci-Fi Theatre Festival is the zenith of the S’Witch Collective founders’ dream of creating the very first Australian theatre festival, in celebration of all things science fiction and theatre.

Celebrating local emerging and established artists’ works, the festival will present selected science fiction and popular culture through the medium of live theatre, and take audiences to the very edge of the universe and back again.

These local artists include the talents of Big Fork (Infinite Skies), Two Braid Collective (The Wishing Well), Jack Edwards (Child’s Play) and collaborative works from the likes of The Humour Experiment and Don’t Push The Button (Space Camp). 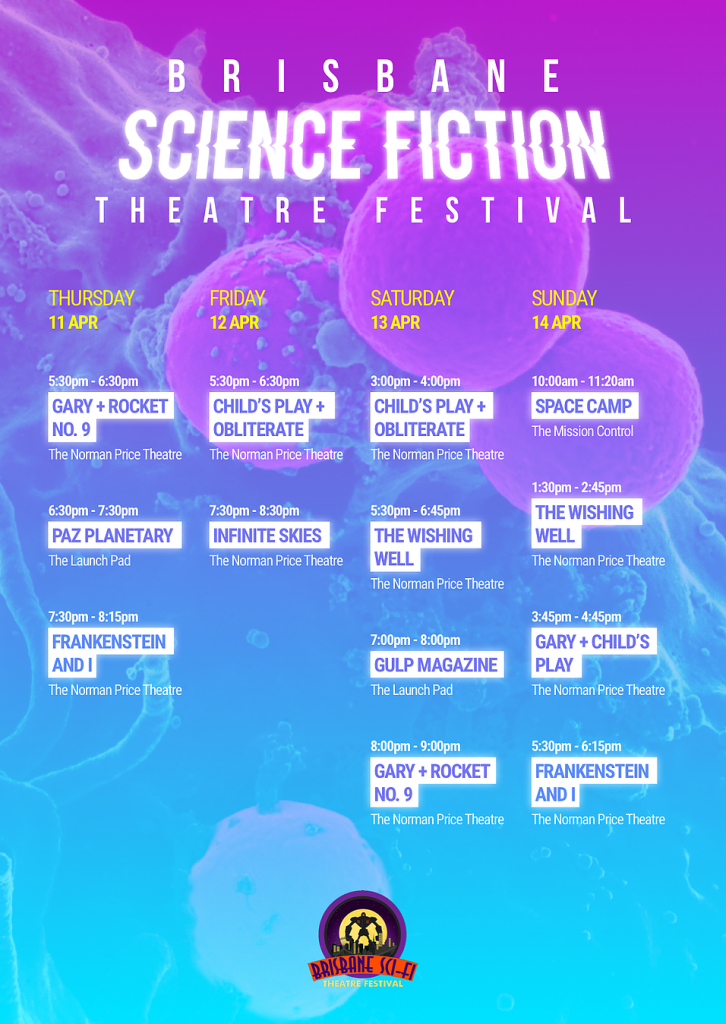 Audiences are encouraged to open their minds as they take in the intergalactic adventures of new local sci-fi works, old classics reimagined and explore beyond our world as Brisbane’s theatre-makers and creative dreamers prepare to take local theatre into orbit.

The Brisbane Science Fiction Theatre Festival is sure to be an absolute blast (off), and enrapture audiences young and old, and dream beyond the stars to bring the stories at the farthest reaches of the universe, somewhere a bit closer to our localised star cluster.