Towards the back of the appropriately social-distanced cafe in West End, we met over coffee with Tom and Rory from Big Dinner to talk all things music.

Big Dinner are an up-and-coming Brisbane-based band who have just last week released their new single ‘Yesterday’s Tomorrow’. The single echoes the influences of the five band members from jazz and rock to folk genres all getting a spot in the track. The release was delayed for a few months due to COVID-19 restrictions as well as the bands planned gigs and tour. However, with the extra time they have now created a music video to go along with it too.

Rory, Tom, Simon, Fraser and Charles are hoping to be able to reschedule a tour through New Zealand with friends, The Fools, in the next year. In the meantime visit Triple J Unearthed to give them a listen.

The Creative Issue: How did you all meet and form Big Dinner?
Rory: Tom and I have always been family friends and we just started making terrible music together in a shed at my mum’s house. I would play drums and Tom would play guitar. Then we started putting music up on SoundCloud in 2016 and one of our friends who played in a band at the time, Twin Folds, had a gig at Music Industry College and they asked us to play.  We didn’t have a band because we were just playing house parties at the time. We met our drummer, Charles, at one of the house parties and asked him to play with us at the gig at MIC. Simon and Fraser soon joined the band too. We have all been rehearsing and booking shows since.

TCI: What bands do you think have inspired you the most?
Rory: I think we are all different. Simon and Tom study jazz at uni so they bring a jazz influence. Charles, our drummer, listens to more heavy metal music. While me and Fraser are more alternative rock, indie folk sort of music. Our inspiration used to be Sticky Fingers but I think we have drifted from that.
Tom: Our friends The Fools too.

TCI: How would you describe your music?
Tom: Alternative indie rock.
Rory: I don’t think we have one sound yet, we don’t feel the need to make one sound when we can make all kinds of songs. Even if the bigger picture is an indie rock song, there will still be a jazz influence with the chords we use and stuff.

TCI: Do you have a favourite Brisbane venue?
Tom: The Foundry.
Rory: Yeah, the first time we played there we played with Twin Folds and we have done a few shows there since.

TCI: What do you hope listeners take away from your new single?
Rory: I hope they like it, I hope it does well commercially, obviously that isn’t the main goal but some songs we put out because we like them and other songs we have more of a commercial focus on.
Tom: This is probably our best produced one so far.
Rory: That is the other thing we have been working with the same producer the whole time and so as our songs get better his producing gets better, so with each song the production is better than the last. 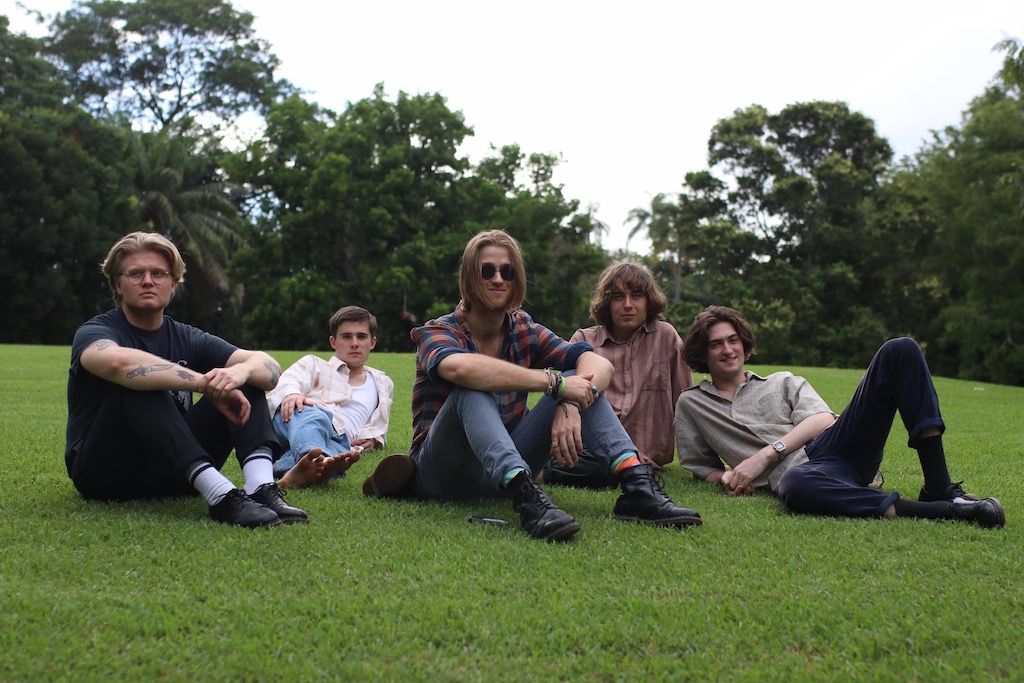 TCI: What inspired the new single?
Rory: We have been playing this song in our set for about six months, we even started recording last year. Our original release date got delayed due to Coronavirus so we decided to add a film clip and extend the song a bit too.
Tom: The music video was fun, we just invited heaps of mates to a bowls club and partied.
Rory: It was filmed during the last weekend before everything was shut as well so we were lucky.

TCI: Is there a certain way you create your songs, or is it more of an organic process?
Tom: The process varies from song to song.
Rory: Some songs just start out of nowhere, like we will just be jamming. Sometimes someone will come to practice with an idea and we will just develop it from there.

TCI: How have the COVID-19 restrictions impacted the band?
Rory: Not being able to play gigs sucks especially because right before Coronavirus we actually took a couple of months off just to get our live set better. We had started playing bigger gigs not just small ones and we wanted to be able to sound and perform better so we took three or four months off gigs. We played one show at The Zoo in early March and that was out last gig, which was amazing. We were also meant to be going to New Zealand for May and April with The Fools. We are hoping that July next year we can reschedule the tour.

TCI: What ways can the community continue to show their support during the restrictions?
Tom: Triple J Unearthed reviews.
Rory: Yeah, that is a big one that a lot of people don’t realise is actually really helpful. Streaming our songs on Unearthed is a big thing because the more streams a songs gets it then gets put in playlists and on rotation.

TCI: What can we expect from Big Dinner in the future?
Rory: On the 30th of June we are going to Byron Bay to record an EP. That will take ages to mix and master but it will hopefully be out by the end of October. We are very excited. Another big goal for us is to one day play Splendour in the Grass, that is the dream.