The Creative Issue had the chance to speak to Ben before his appearance at Brisbane’s premier French festival, Le Festival. Ben, a man passionate about his craft was happy to chat about all things cabaret, his career and any challenges encountered along the way.

Starting off with a question about his career highlights, Ben candidly offered a sneak peek into his life as an Aussie artist working in France and elsewhere. ‘Well the Baz Luhrmann Moulin Rouge film was probably one of the highlights because I was a featured acrobat tumbling double in the beginning of the film. So in the opening scene there’s a bit of a dance number – the cancan and I tumble across the stage in a fat suit. So if you blink you’ll miss it, but…that definitely was me tumbling across the film there.

And then I guess other highlights more recently would have been performing at the Australian embassy in Paris, so last year I did a world tour where I performed in a few different countries from Croatia to Vienna also to the United States. But one of the highlights was being asked to actually go to the embassy and perform for the…Australian Ambassador to France, which is Brendan Berne. And that was pretty amazing because it was basically at his private residence. There’s a beautiful grand piano and it’s overlooking the Eiffel Tower, and so myself and another artist, French-Australian artist that I worked with before we performed there and did a version of my Cabaret show.’

But before we got any further we had to put it to Ben, what is Cabaret in 2019?

‘It’s an interesting question, because I guess with the idea of things like the film Cabaret with Liza Minelli, there’s the whole kind of concept of that style of cabaret but I think cabaret is a format to perform a collection of songs and interlink them with either a story and or maybe elaborate costumes and just a little bit more joie de vivre, as we say in French. A bit more pizzazz bit more live. It can be a whole range of things, but I think essentially, it’s a collection of songs that the performer links together with anecdotes or stories and just adds a little more oomph.  Little bit more sequins let’s say.’ 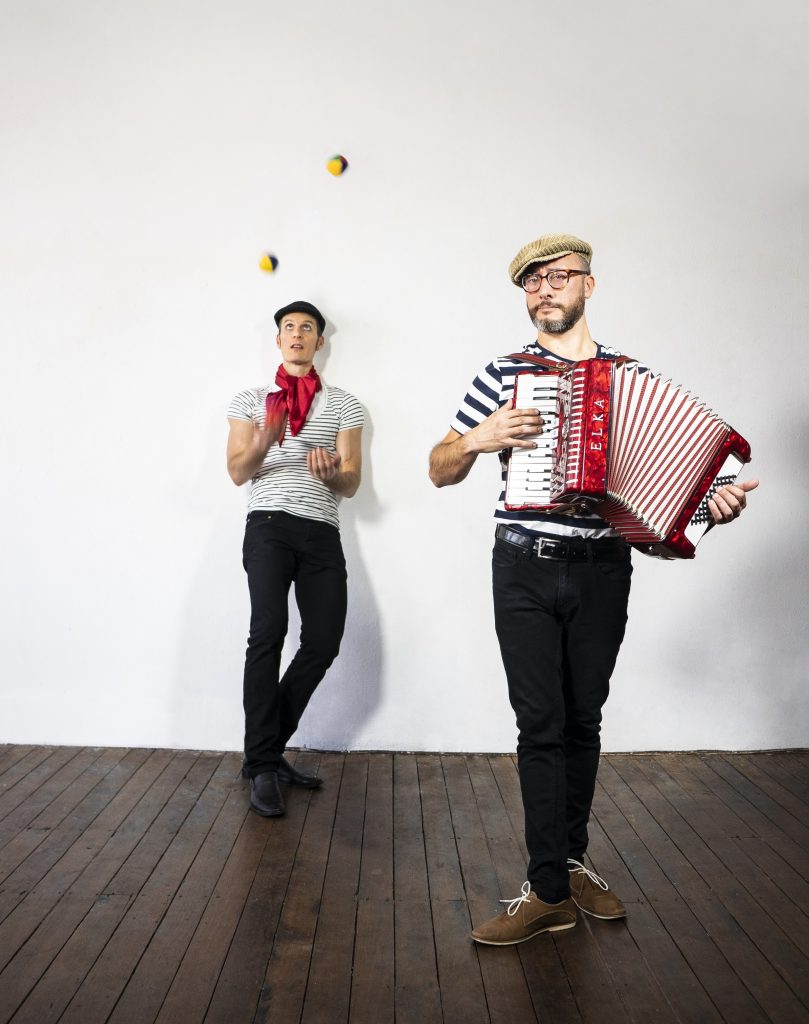 Ben’s show is described as ‘Aussie with a French Flair’. Inspired by his own experiences of busking in France he related that he soon discovered that it’s not something you can just ‘rock up’ to.

‘So I guess I just sort of rocked up and there’s this scene in the show where…I start to busk. And of course this guy coming from Australia can hardly speak any French starts to busk in the middle of Montmartre and basically is busking on someone else’s turf. I mean go figure of course he is. So needless to say I got into a little bit of trouble there but eventually because of the Aussie kind of humour and the Aussie character that can be quite charming and exotic in a way. So, what happened from there is that I connected with an actual Parisian, French musician and so I got shown the sites of the Jazz clubs in France and that was the inspiration for the show. So I kind of developed that idea and basically put it into a show’.

France and Australia have a long history of friendship and that warm trust is something most people feel connected with. Ben answered the question about this relationship with a thoughtful air, echoing the sentiments of many.

‘And I think also a lot of French people I meet here in Australia, they love Australia so, from my experience there’s the Aussie kind of relaxed, larrikin-esque kind of attitude versus the French culture which is a bit more… it’s not more serious because I don’t think French culture as serious but it’s a little bit more refined let’s say. And those two elements can actually work in conjunction with each other to balance each other out if you see what I mean. So as Australians we can learn from the French to be maybe a little bit more refined at times and the French can also learn from the Aussies just to go with the flow a bit more. But I think having seen that in action at the Ambassador’s residence, what I loved about seeing Brendan there is that he’s very personable, he’s very funny, he’s very friendly, he’s very warm and welcoming and that translates into this French culture of beauty and romance and that more refined approach and I think that’s a really wonderful connection that particularly Brendan has made as an Australian who’s actually in France.’

As for challenges and nerve wracking performances Ben Noir has had his fair share.

‘I’m sure every artist will tell you there’s a number of challenges. I guess for me, because I was also an acrobat. I started as an acrobat, I’ve always been a musician, and a singer so I’ve developed those two elements all my life. Probably the biggest challenge for me was getting injured when I was working in the circus, I had a number of injuries which stopped my career as an acrobat. And so that was quite difficult but then I was able to refocus more into performing arts. And probably one of the biggest challenges as an artist, you’re only as good or only as well-known as your last performance, so particularly an up and coming artist you have to prove yourself every time in every particular performance  so it can be quite challenging to have that resilience to keep going particularly when you get the knockbacks, particularly when you’ve just performed a world tour in Europe but then you come back to Australia and you still have to get back in that race and you have to get back in line and actually prove yourself that you have the goods. Which you know I can say honestly I have as an artist because I work on my craft I’m passionate about my craft. So that’s probably one of the biggest challenges for me, that ability to be accepted within that world, the artistic world. ‘ 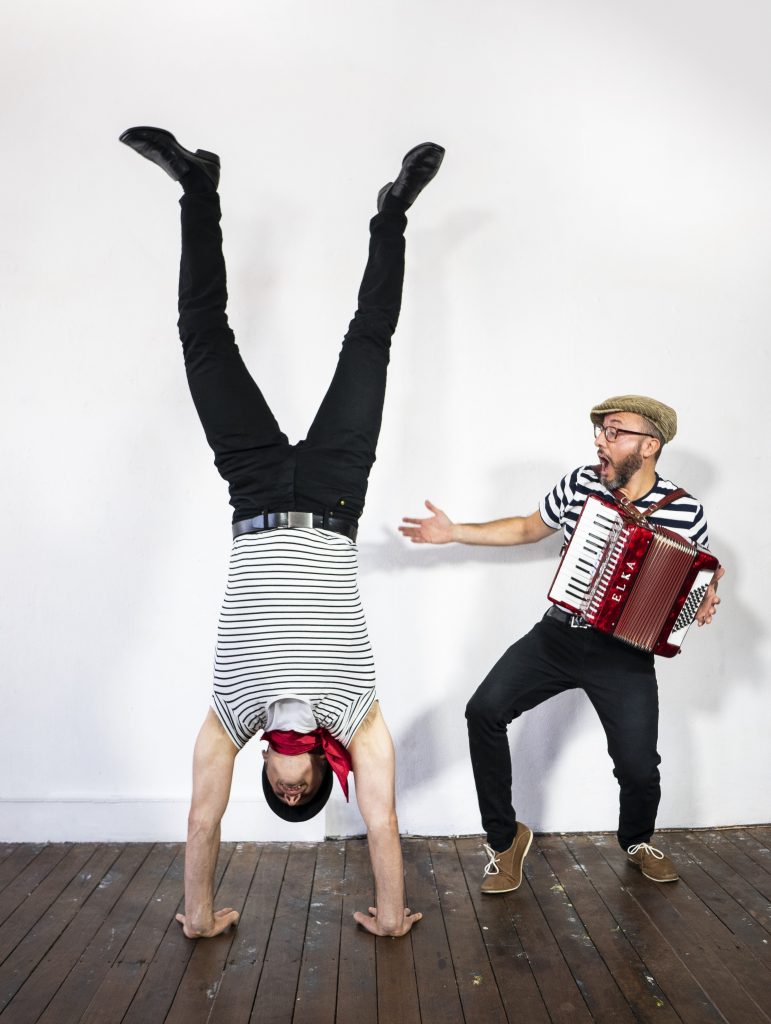 ‘Recently I performed on a television program, which I can’t mention the name of, but that’s probably the most nerve wracking performance I’ve done recently. But it was really interesting that my preparation was crucial, because I was really really prepared, and I also used a lot of visualisation, so the lead up was really stressful and scary but the actual performance was pretty straightforward because I was so prepared. Another performance last year which was quite nerve wracking was performing at the Vienna Boylesque Festival and on the same evening, Conchita Wurst, who was the winner of Eurovision a couple years back, she was performing on the same night and so I guess the pressure you put on yourself to really prove your worth in that context was quite high. But that was a really amazing, amazing performance’.

As for Le Festival goers there’s a lot in store for them, especially if they get a chance to see Ben Noir’s act. ‘I’ve worked my show into a specific line up for this festival so they’re going to get that Aussie humour which is in contrast with the French style. I have a fantastic accordion player who I have worked with for a few years now on my shows. He’s an Italian-born accordionist but he specialises in French music and he’s lots of fun and very funny and we do a few little vignettes together. I’m also working with a fantastic group of dancers, Sydney based dancers, two of whom are French so they’re both French born performers and another two Australian and an English dancer. So that’s going to be fantastic because we’re going to bring a little of our own flair to the Cancan. I’m sure the Cancan is going to be on loop the whole festival, but we have quite a fun take on it. And also just that real quintessential French classic chanson. So a few of the well known French songs which everyone will love but because I’ve worked in Burlesque over the last few years there will a little bit of an element of tasteful burlesque involved as well’.

Finally, we wrapped up the interview with a few parting questions. Ben was happy to chat about his upcoming projects, as well as parting words for those aspiring artists out there.

‘Well there’s a few things in the pipeline as I say there’ll be the television show that I performed in…I’ve recorded an album, Ben Noir’s French Cabaret, and it would be fantastic to do a follow up album which will come later in the year. And I’m looking at another overseas tour, probably later this year as well. At the moment I’m performing every Sunday night at a fantastic French restaurant, called Claire’s Kitchen. And for people in Sydney it really is a fantastic dinner and show event. It’s based on the work of Salvador Dali, but it’s run by Claire de Lune who’s a French chef and artist and performer.’

‘I think definitely just committing to your craft is one thing and sometimes we get a little bit distracted by the idea of notoriety, fame, fortune. Just being in it for the love of your craft is essentially what we need to do. Because sometimes as an artist the financial gain is not remunerated to the amount of work you put in, in terms of costumes and all that kind of thing, and it actually is not about that. It’s actually about committing to your art, and committing to your craft and just going for it, going and finding those little burlesque clubs, or those cabaret venues and just getting out there and just doing what you love, whether it’s French cabaret or whether it’s another style and just being true to who you are I think is essentially the key.’

So whether you’re catching Ben Noir perform at Le Festival or happen to see him in Sydney, it seems that whatever experience you get of him, you’ll always be left wanting more.

THE DETAILS:
What: Le Festival
When: July 5 -7
Where: Southbank’s Cultural Forecourt
How Much: From $5
More info: Visit Le Festival’s website here

Single Review: WAAX Fly Ahead Without You on New Single ‘I Am’