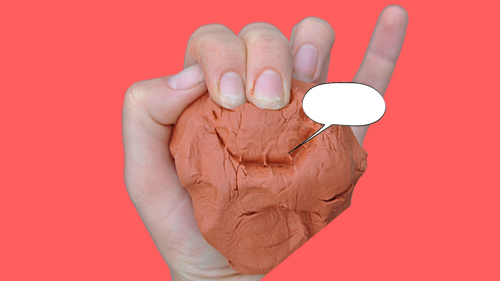 Those of us who visit art exhibitions regularly have all been guilty of over-indulging in the wall text. Be it as a result of feeling overwhelmed by the art around us, intimidated by itâ€™s meaning, or simply feeling lazy, an accepted common starting point in our journey around the gallery is the explanatory wall text.

I was at a friendâ€™s exhibition recently and did just this. I got to the entrance of the exhibition space and upon realising I was faced with a room full of people I knew (but could not be bothered talking to), took safety hiding my face in front of the wall text, choosing to look deep in thought (and un-interruptible) rather than engage in conversation (maybe that says more about my anti-social tendencies than anything else, but on with the story).

Luckily another friend that was there with me saw this situation unfold. She walked over to me and said in a reprimanding manner â€œDonâ€™t read that yet!â€. In scolding me she saved me from planting seeds of meaningÂ that explained the artworks that were right there in front of us. She knew that if I had finished reading I would have filled my brain with hard-to-digest text and had no room for an original thought of my own about what I was seeing.

It is a curious feat that when faced with the real-life art object, and the 2-dimensional abstract describing that very same art object, so many of us will opt for safety in the wall text. We choose to do this rather than personally examine that tangible object that exists right in front of us, pure in form and unadulterated by convoluted adjectives placed in overly theoretical contextualising sentences (phew – see what I’m talking about?!).

Is it that we are afraid we will not understand if we attempt to decipher meaning ourselves? This in itself implies that we believe there to be a right and wrong way to experience art, something which is counter-intuitive to the point of art in general, or perhaps that is aligned with the inaccessible â€œhigh artâ€ of such esteemed institutions who favour visitors of a certain type of academic, social, or financial background, and discourage visitation by genuineÂ explorers who are merely interested in experiencing and learning about something new (the type of place where the gallery assistant who is dressed head-to-toe in a black designer outfit might look you up and down when you walk in asking if they can help you like you have gotten lost and ended up in the wrong place).

It makes sense that this friend interrupted me from making this mistake. Her name is Theia Connell and she recently held a collaborative exhibition with fellow artist Jake Preval about this very issue. Together they conceptually tore apart, literally deconstructed, critically analysed, and then comically reconstructed the language of exhibition texts… and then had an art exhibition about it. 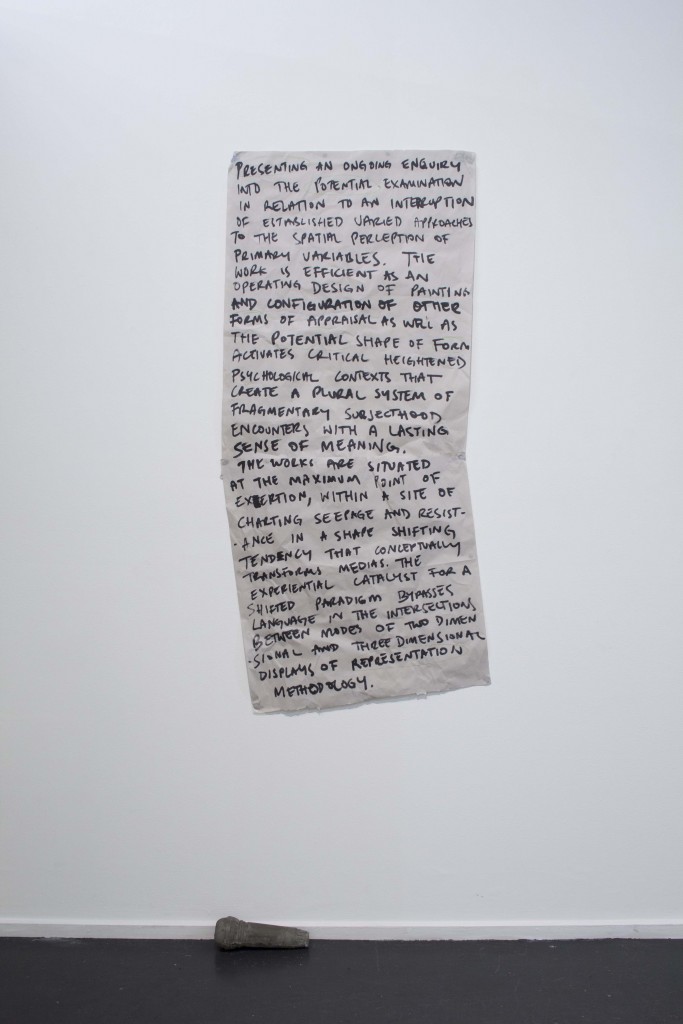 Every artist has a love-hate relationship with the language used to describe their art; what MONA mockingly calls â€œArt Wankâ€ in an attempt to distance themselves from the contradictory nature of describing the meaning of artworks (partaking in the “wankiness” and remaining complicit despite this), and artists Theia Connell and Jake Preval describe as the â€œâ€“alities, -isations and â€“ismsÂ of art speakâ€. Theia and Jake examined this language and its relationship to art and artists critically in their recent exhibitionÂ Blurb, which was held at Kings ARI this May.

Taking snippets from wall texts created to contextualise exhibitions that took place at various ARIâ€™s around Melbourne within the last three years, the pair used a cut and paste technique to put together an absurdist text from which to create their art objects:


‘Presenting an ongoing enquiry into the potential examination in relation to an interruption of established varied approaches to spatial perception of primary variables. The work is efficient as an operating design of painting and configuration of other forms of appraisal as well as the potential shape of form activates critical heightened psychological contexts that create a plural system of fragmentary subject-hood encounters with a lasting sense of meaning. The works are situated at the maximum point of exertion, within a site of charting seepage and resistance in a shape-shifting tendency that conceptually transforms medias. The experiential catalyst for a shifted paradigm bypasses language in the intersections between modes of two-dimensional and three-dimensional displays of representation methodology.’

By creating this text as the first piece of their exhibition, they invert the traditional process in which artists first create their work, and then despairingly struggle to find the words to explain it to the outside world.Â Inverting this process and using such uninterpretable (yet completely familiar) language as the basis from which to start an exhibition, transforms the isolating academic language into a form of inspiration, a starting point from which to playfully create works to match. The resultant works come together in the space to form an equally absurdist combination of art objects.

A visitor experiences a curated encounter with each of these objects in the gallery space. On entering the space first we are confronted with the baffling wall-text, written in permanent marker on butcherâ€™s paper with no signage anywhere to indicate that it is not meant to make senseÂ (leaving more than one sincere yet unaware viewer walking away looking puzzled â€“ an incredible example to highlight the very issue the exhibition is criticising).

Turning our attention directly ahead of the entrance, our view to the windows across the room are blocked by the unfinished facade of a wooden structure that has been constructed within the walls of the gallery. Textural puddles of blue carpet surround the structure as if the interior has melted and is leaking out the sides, echoing the language of artistic “seepage and resistance” from the neighbouring absurdist text. 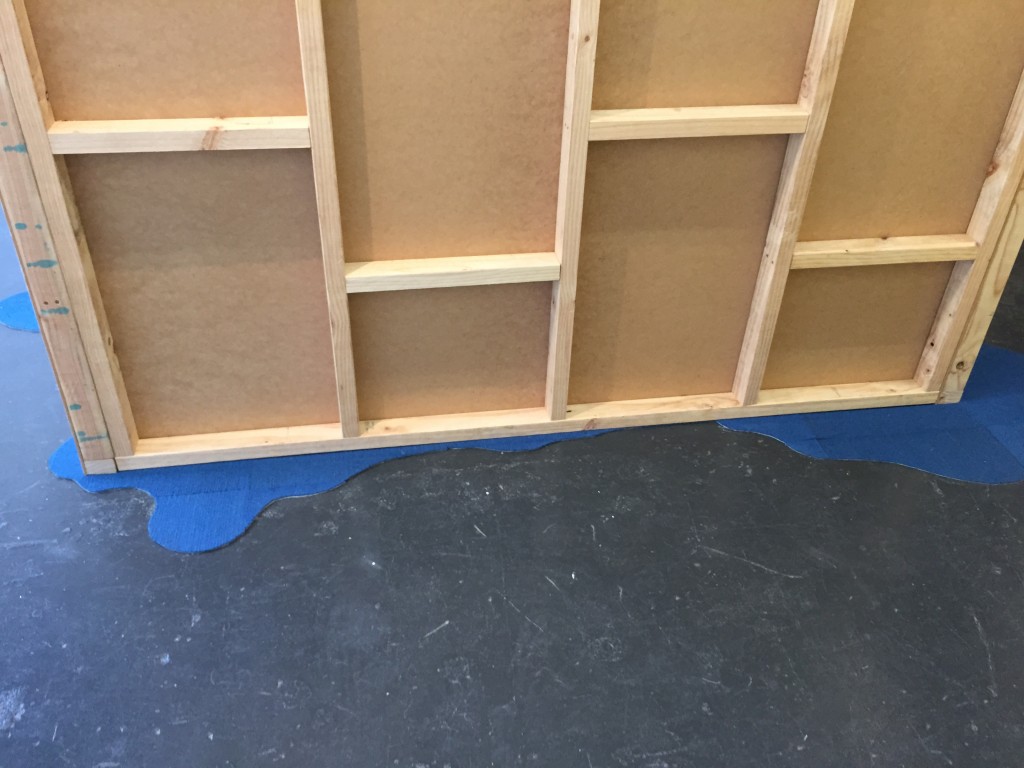 From this obstructive facade, our heads are forced left where a yellow line of colour along the wall pulls our eye towards the next art-object, a wooden form that stands like proud signage. Two holes in the top right corner invite pairs of eyes to use them as frames through which to view the harsh yellow that exists on the other side. At the bottom of the wooden form is an image. It is a photograph, of one of the artists, holding a mirror, that is reflecting an artwork. Common art-speak words like “frame”, “reflective” and “mirrored” are re-created in this physical representation that hasÂ as many elaborate layers as the absurdist text that inspired it. 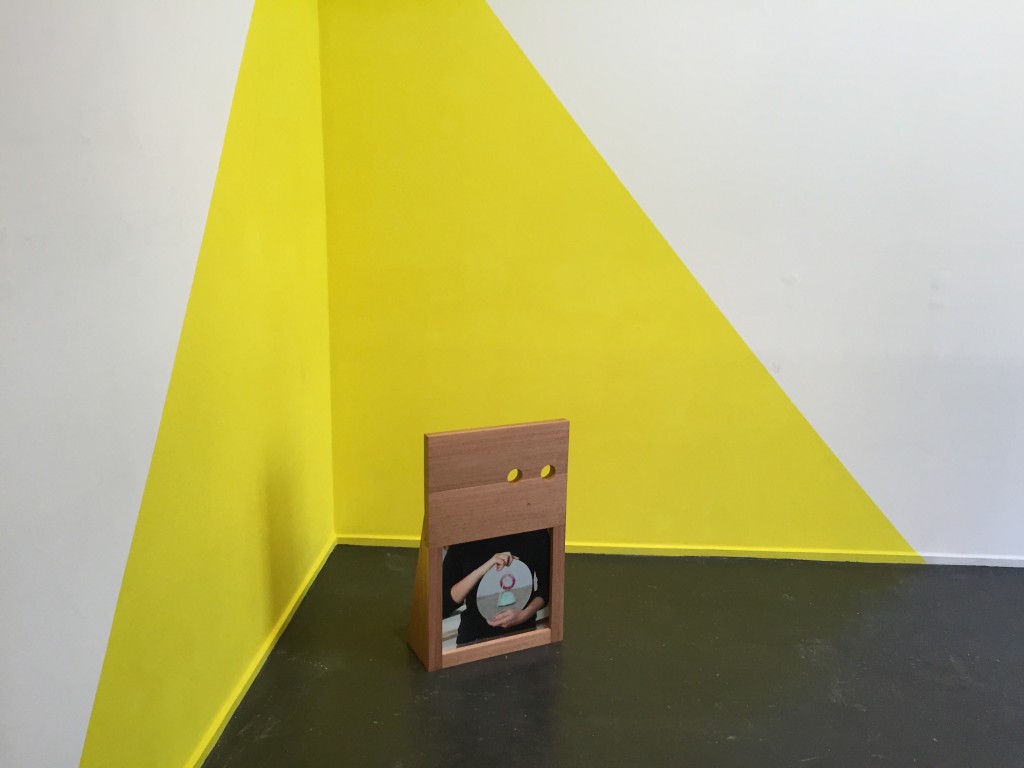 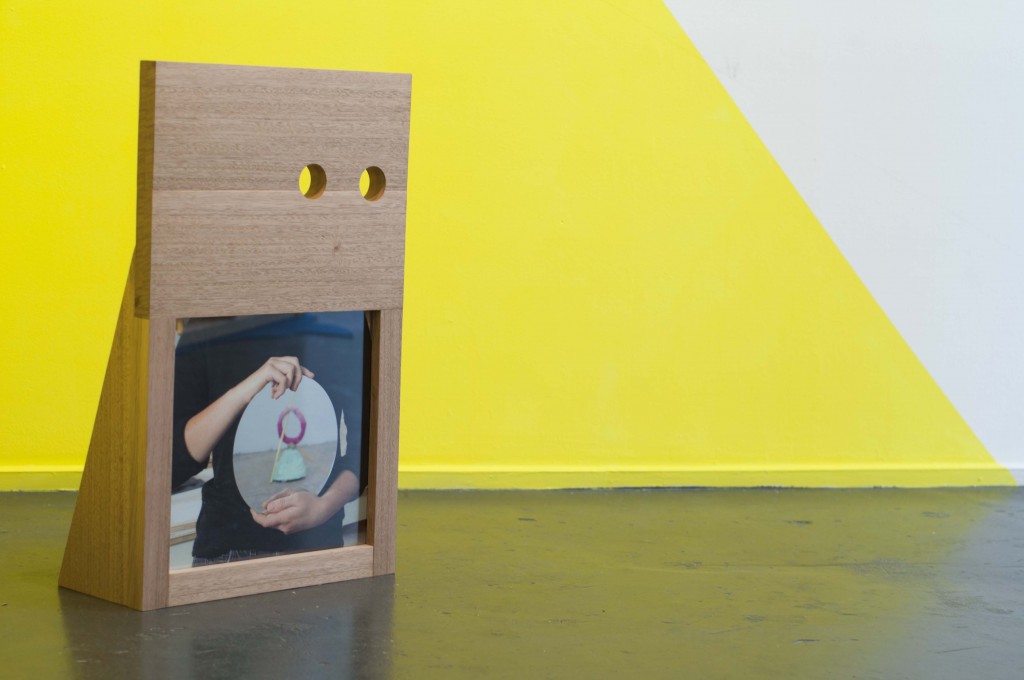 Following the yellow line along the wall further down the gallery, we turn to face a material hanging with two familiar images printed on it. Two lumpy clay forms resembling human heads face away from each other, the first resembling a simplistic Greek sculptureÂ that has been clumsily put together, and the second an even more simplistic form whose facial parts haveÂ undergone a Picasso-style reconstruction. These forms embody words like “shape-shifting” and “configuration(s)” that are included inÂ the absurdist art-language of the butcher’s paper. At the same time as we circle our wayÂ around the wooden structure, blue continues to seep out to the rest of the gallery. 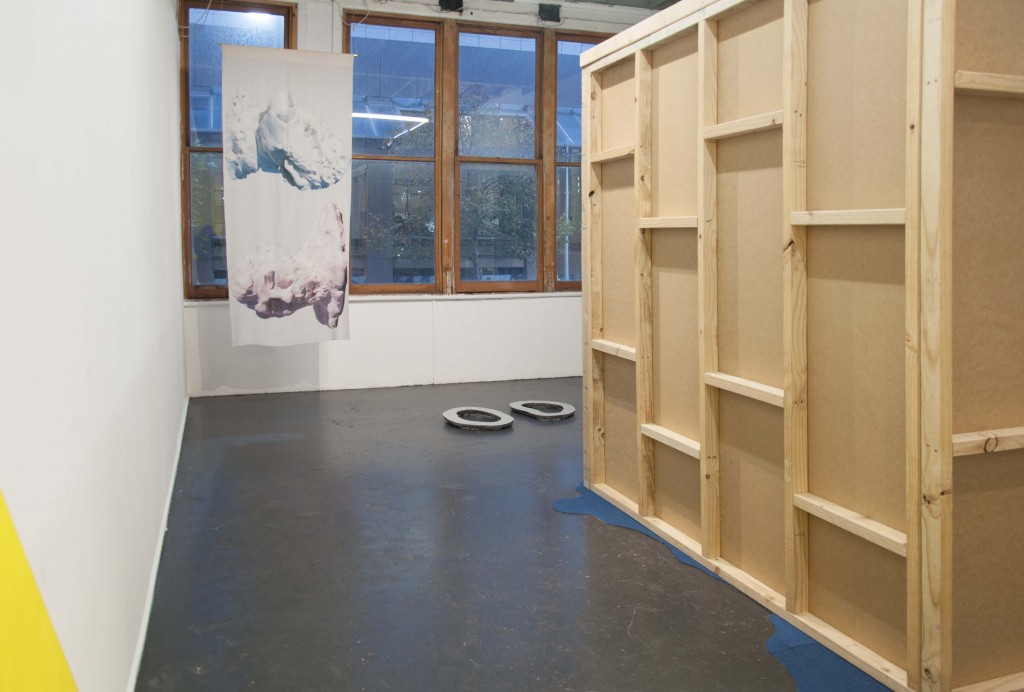 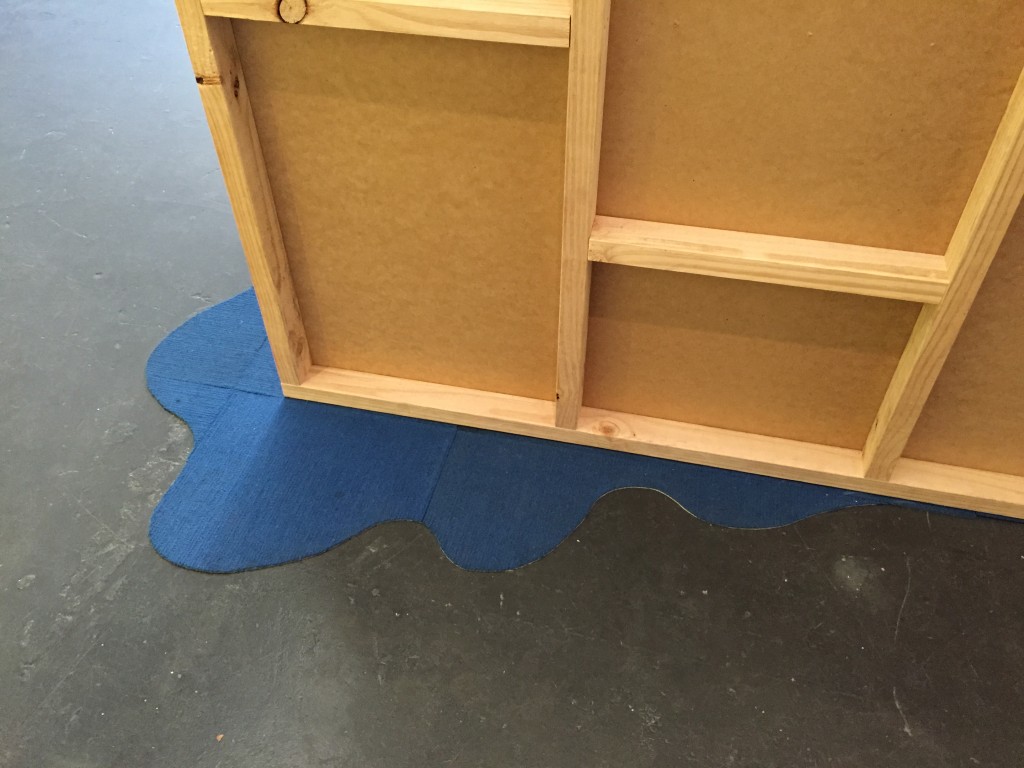 Turning right again we have come full circle around the internal wooden structure and are faced with the entrance to the cube. Perpendicular to the entrance is a white wall which is bare except for a small object that rests at head height. On closer inspection, a plaster cast of the artists tongue pokes through the wall and teases us, a form of sculptural tongue-in-cheek that rivals the comedic absurdity of the initial text. The tip of the tongue supports a miniature protest placard that is blank, as if it is not entirely sure what it should be protesting (though it knows it is definitely protesting something). 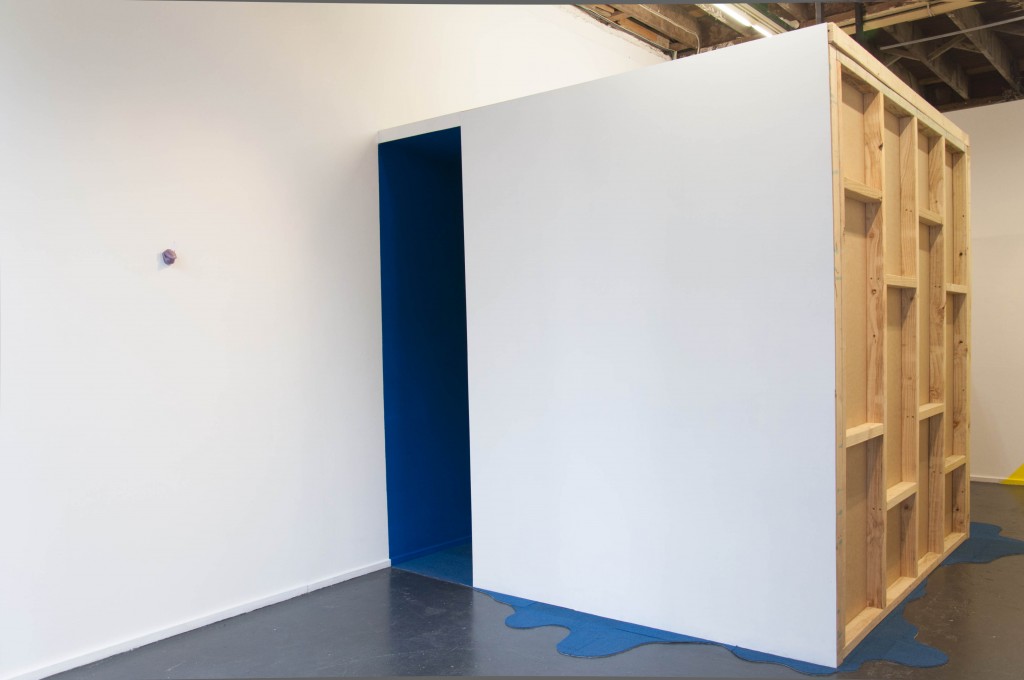 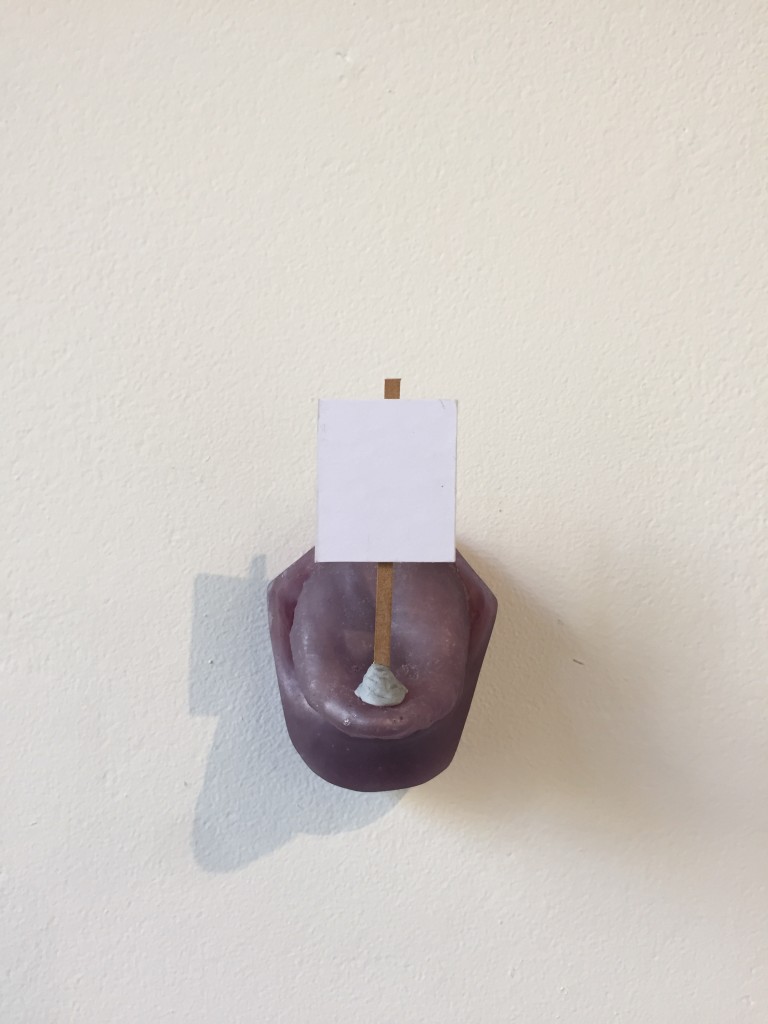 Entering the internal cube-shaped structure we realise it is painted entirely in blue (a playful action that places a “blue-cube” within the white-cube). A single artwork hangs on the wall, traditionally abstract in form with a single spotlight on it, highlighting the significanceÂ of the art-object in the gallery-as-cube context. The colour of the walls and lighting affect perceptions of depth, and evokes the 2-dimensionality ofÂ a Thomas Demand photograph from within the space itself. The carpeted interior spills out in cartoon-like blobs to the concrete gallery floor, as this constructed work continuously seeps out into the rest of the gallery space. 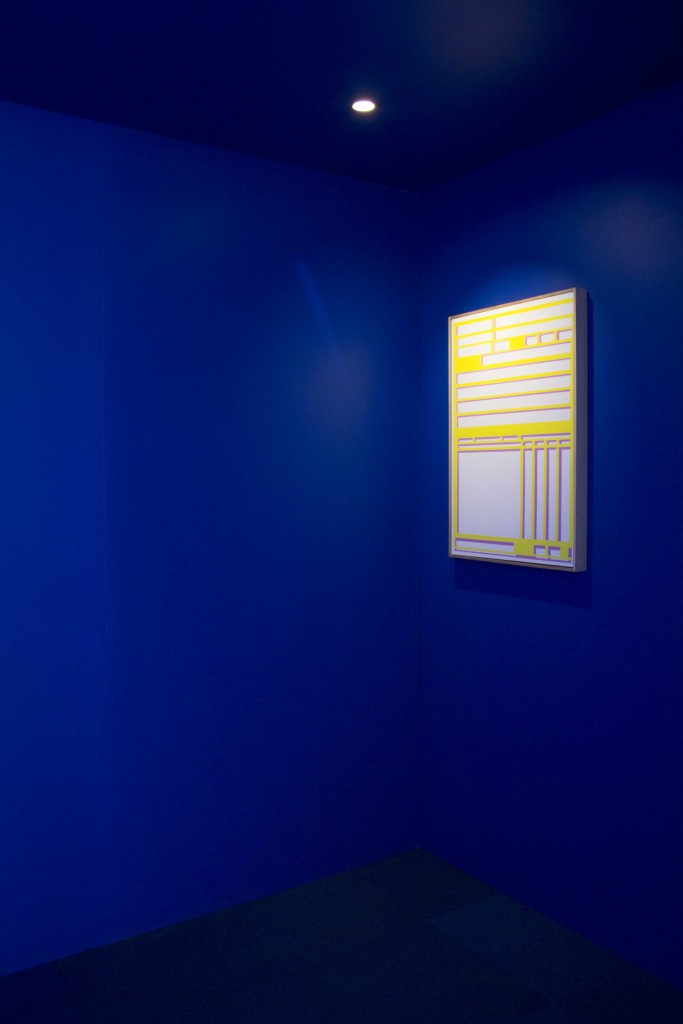 By the time the viewer reaches the end of the gallery, they haveÂ been taken on an intentionally curated absurdist journey that perfectly replicates the confusion and perplexity of the first piece of text they encountered. Blurb is an exhibition that critically dissects the use and meaning of artistic language in an exhibition context, and emphasises the findingsÂ by taking the viewer on a physical exploration of art objects that reflect it.

The irony in writing about this exhibition is that it is impossible not to become complicit in the use of such language in the process… the only thing to do is to be aware and continue, and embrace its use as the artists have done.

All images used with the permission of the artists.