On the first Thursday of every month, a couple of Queens perform for the masses in BLUR. Blur is a drag show meant to create an environment for all, blurring the lines of sexuality and identity. The resident Queen, Kitty Kardashian, performs her set alongside other guest queens who don’t fail to disappoint. Their March show featured Jess Whoo who performed as fiercely as her split jumps. 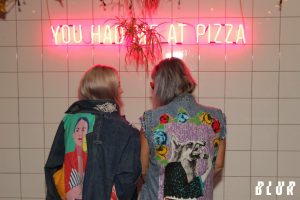 The show is a chance for resident designer, Kimbralou to flaunt her work which is plastered all over the queens and other spectators. Kimbralou’s style is a recycled fashion using denim jackets, pants, and skirts with patches of popular culture sewn onto the pieces. Her art includes popular culture across music, film and television which makes her work stand out and extremely unique.

Kimbralou is an advocate for supporting minority groups and women through her work. She had described herself as the CEO of Power Pussy Incorporated which empowers women to be positive about themselves and confident through their fashion. She represents the PP Inc. loud and clear in her work, with many denim jackets having the words sprawled across the back with depictions of tigers, jaguars and other powerful felines. 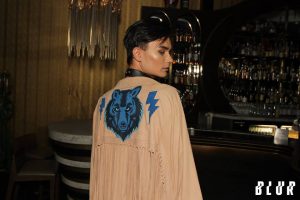 Her empowering standpoint for minority groups is emulated in her colourful and clever work. She incorporates the plain denim with vibrant colours that complement each other phenomenally. Although her work is successful amongst the LGBTQ community there is an interest among the wider community. Some of her work has caught the eye of young musicians who have seen her  musically inspired pieces, that take design cues from The Rolling Stones and Bob Marley.

Kimbralou’s work has been featured in the Brisbane and Gold Coast RAW shows within the past eight months and from there, her success has skyrocketed. She has scouted models from the BLUR shows and creates her clothes around their unique personalities. Her models are an array of people, from crossdressers, models, strippers and other admirers of her work. The Kimbralou models make up a motley crew of people who work the clothes on every runway.

Kimbralou sells her pieces at the Brisbane City Suitcase rummage, at her resident spot at the Shed in Caboolture and at her runway shows. Kimbralou has an upcoming show in April at the Met in the Fortitude Valley as a part of RAW. Her work can also be seen out and about at the BLUR Thursday shows at LaRuche in the Fortitude Valley.

What: BLUR Thursdays at LaRuche

When: First Thursday of every month