Brisbane basics (on the cheap)

Three months in, and I think itâ€™s safe to say that Brisbane and I have become pretty good pals. Sure, we wouldn’t call each other up just to say that weâ€™d seen a funny YouTube video of a monkey in a tuxedo, nor would we feel comfortable taking off all our make up and crying at an episode of Geordie Shore together just yet, but letâ€™s just say that weâ€™re getting thereâ€¦ weâ€™re getting to know each other.

However, the case was somewhat different in my first couple of weeks. When it came to where to go and what to do, I didn’t have a sausage, particularly as I was on a budget.

Something I think Iâ€™d have really appreciated would have been someone sitting me down and teaching me the basics. Brisbaneâ€™s just like school â€“ you have to get some core facts in you before you can really begin to digest the interesting stuff. So here they are â€“ my three Brisbane basics. Coffee, lunch and a boozy evening out. Because letâ€™s face it, what else do you really need?

Not only is the coffee here absolutely top drawer, the place is a dream to visit. The laid back, cosy and creative vibe of West End is reflected perfectly in this coffee shop, which is home to an indoor and outdoor area, both of which are decorated with kooky and original artwork.

In terms of price, itâ€™s pretty much on par with the rest of Brisbane. However, the comfortable atmosphere in The Three Monkeys means that you can waste hours in there chatting and relaxing â€“ ensuring that you really get your moneys worth.

Because of its core location in the heart of West End, The Three Monkeys is the ideal place to begin your adventure of the south side of the river.

Although Sourced Grocer is located outside of the traditional Brisbane hipster areas, the store remains a magnet for facial hair, beanie hats and Vans. Simply put, Sourced Grocer provides the perfect backdrop for a vortex of vegans to discuss obscure brands and even more obscure bands.

Of course, Sourced Grocer is not just celebrated for simply being a perving station. In fact, the market / cafÃ© has a clear focus on sourcing local and organic seasonal produce, taken directly from the growers, marking it firmly on the map as one of the most ethically sound food venues in Brisbane.

Not surprisingly, the menu is tasty, original and diverse, while the price tag is in no way offensive.

As a craft beer aficionado, Kerbside quickly won my heart as one of the greatest drinking establishments in Brisbane. The staff are knowledgeable and passionate about their vast selection, making the slightly more expensive trip entirely worth it.

Unlike some other drinking joints in the Valley, which are void of Â any personality or originality, Kerbside has about as many facets as Arnold Schwarzenegger has career paths.

Decorated with a mismatched variety of salvaged furnishings, the mostly outdoor bar looks like a lovechild between your Grandmaâ€™s living room and World War II itselfâ€¦ in a good way. 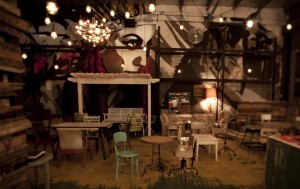 The mostly outdoor bar looks like a lovechild between your Grandmaâ€™s living room and World War II itselfâ€¦ in a good way.

How not to be a tourist in Brisbane