The Brisbane Comedy Festival has quietly cemented itself as one of the nation’s top comedy events over the past few years, and the 2015 lineup is looking to be a screamer of a month. Tickets are on sale now- ensure your front row spot today!

There’s a distinct element of danger to being seated in the front row at a seasoned comedian’s gig. I remember arriving late and sheepish to the uproarious Irishman Jason Byrne’s Powerhouse show in 2010 only to be biffed gently in the face by a giant gloved hand on the end of a long stick – he’d come prepared. Make sure you secure the best seats in the house – tickets for the Brisbane comedy festival are on sale now.

Acts guaranteed to bring the house down:

Celia Pacquola: Let Me Know How It All Works Out
Tuesday 24 – Sunday 28 February

When faced with a comedian’s worst nightmare: a grand total of seven people showing up to a late-night Melbourne Comedy Festival event she was participating in during 2012, award-winning comic, actor and writer Celia Pacquola called it a night, bought us all beers and sat us down for a friendly chat. This small act of kindness has prompted me to follow her career with dogged devotion ever since – which is good, because she’s bare-all hilarious while simultaneously uplifting. Let Me Know How It All Works Out is a show about her slapdash planning for the future as she obsesses over it nonetheless. 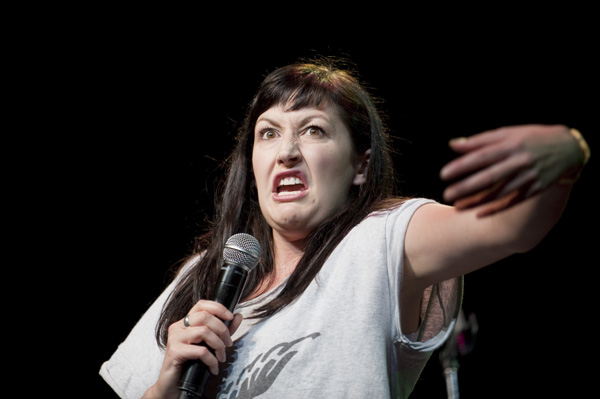 Seasoned comic Bart Freebain’s whimsical high-energy brand of comedy is perfect for the Powerhouse’s intimate Rooftop Terrace, where one giggle can soon prove infectious and set the whole room off. Bart’s new show “Ultra Power Lord” tackles the times in adult life when you might feel powerless – but Bart is here to help armed with countless lols and adventures with his own brand of surrealist comedy that’ll have you leaving feeling all light and joyful.

In the top drawer of my dressing table sits a condom with Rhys Nicholson‘s face on it, handed to me from a basket as a party favour at a show of his several years ago. I keep it as a reminder of a truly naughty and hilarious night of deadpan, acerbic wit will have you pop-eyed with shock and gasping for air in the same motion. A rapidly rising star over the past few year (with his own menswear collection to boot), Rhys’s show Forward muses on what he will be best remembered for if he dies.

Also on offer will be the Class Clowns heats with a showcase of fresh young talent straight out of the classroom, free laughs at the Pineapple Club (bring a flask for ultimate value), and the ever-evolving Chalkboard, where comedians place their newest material at the audience’s tender mercies.

The Grate’s New Album Is Great!