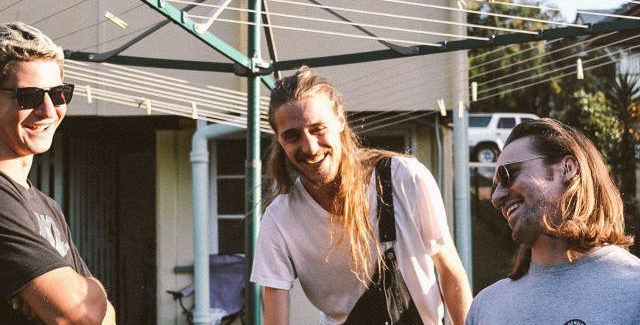 BIGSOUND finally arrives next week and Bugs are taking the stage Tuesday and Wednesday night.

Bugs are making waves in their hometown of Brisbane and just wrapped up a huge national tour in June. This three-piece has complimented Brisbane’s alternative-rock scene perfectly. We had a chat with Connor about their recent tour and their upcoming showcases at BIGSOUND.

Firstly we had to ask about the tour. “It was overwhelmingly cool, a really humbling experience that taught us all tonnes. We have made some lifelong memories and friends over the last few months so the perspective it gives you after playing for so long is really nice. Especially having people sing words you wrote back to you in a different state with tears in their eyes, that is a pretty special feeling. Hearing some of the people who have listened to our music open up about the ways it has affected them is a huge privilege and one of the most rewarding aspects of building / being a part of this community.”

They sold out a couple of shows on the tour which wasn’t expected, says Connor. “Absolutely not, in my wildest dreams I thought we might nudge 150 tickets in our hometown of Brisbane because our friends are so loyal but it caught all of us off guard how well the EP has been received nationally. And the scale to which it’s been emphasised interstate is shocking, like people wearing our shirts in Adelaide and in Perth, tattoos on their lips in Hobart, absolutely mind boggling stuff.”

Bugs’ biggest hit of late is arguably ‘Glue’ from their latest EP Social Slump. Along with the big song came a big music video with a few local bands from Brisbane. “Actually logistically it was pretty simple, we just used our weekend (we work retail / hospo so it was mid week when everyone young and creative is kinda free) – Will helped get all our friends in the one place and we just kind of hung out in the empty (boiling hot) pool for a few days waiting for pals to pop in and shoot their bit. It was super lax and really fun!”

After playing huge festivals like Fall Festival last year and now getting their spot at BIGSOUND, what’s the next goal? “Just take it all as it comes and keep getting better at writing and performing, the rest of the stuff in terms of goals and ambitions is pretty irrelevant cause a lot can change in a short amount of time in this industry. Our permanent goal is just making sure we’re all happy, healthy and enjoying playing music together. Primarily that’s the most important thing for all of us and why we do it. So ambition is important, but expectations are only going to leave you disappointed, so we try to be grateful for what we have.”

Although their latest EP was only released in April, they’re working on new music. “We are actually writing an album at the moment, we’ve got fourteen songs nutted out but just need to tidy up the structures and meanings but it is so, so exciting to be developing some new stuff. We sat on the previous release for six months and the way it works can sometimes be frustrating as by the time a release comes out the cycle is at the end of it’s enjoyable energy. So yeah, feels great to be writing and creative!”

Bugs have nabbed three stops at BIGSOUND, Tuesday night at The Valley Drive in, Wednesday at Levi’s BIGSOUND Party and again at Crowbar later that night. Bugs’ preparation for BIGSOUND has been relaxed. “The same as any other gig/week, it’s just a conference. Yeah sure there are heaps of important people there but heightening your mindset to be anxious or hyper conscious of your presentation is just going to be detrimental to your own well being in the long run. No one can keep up a false facade for long, and being genuine is the most infectious aspect of charisma so I just want to be myself and true to my values. I’m confident in our music and band, I love my friends, if things go well that is cool but overall it’s not the be all and end all of our music careers so I just want to have a great time.”

Who else on the lineup is Connor keen to check out? “TOO MANY TO NAME. Good Doogs and RAAVE TAPES are going to explode in the next twelve months, RAT!hammock put out the best song I’ve heard all year, Greta Stanley is down from FNQ. Pinkies [Pink Matter] and Biccies [Nice Biscuit] will blow the socks off all the interstate crew because Bris has been frothing for a year now. Candy and I Know Leopard have put our incredible releases this week too so I can’t wait to see them, I’ve known Cal for years / their band is crashing at my place. It is so cool seeing how well he has developed that project over the last three years. FINALLY get to see Walken <3 Plus my favourite SWEATER CURSE ARE PLAYING AND IF YOU DON’T SEE THEM YOU ARE A MORON.”

If you’re heading to BIGSOUND, Connor thinks you should definitely check out Bugs. “They want to feel something passionately, because they want a burst of energy and jubilation, because they want to experience a sense of belonging in a community where they can be accepted for themselves. Because they want to hear something different. Our music is unique, we’re proud to be Australian, we wear our hearts on our sleeve. If not for all that, I face plant frequently so it could be a freakin’ train wreck. Either way I don’t think someone has ever left one of our shows without being entertained in some capacity.”

Review: Kingswood at The Zoo