10 years ago, Brisbane’s city streets where untouched, hardly filled with art. That all changed when public spaces became available for artists to dabble and play with following street art revival all over the world.

Today these streets are threatened by a lack of public space, perhaps due to the privatisation of many public spaces and the city councilâ€™s mission to paint over pieces of art.Â So it begs the question, does Brisbane have a problem with graffiti?

Graffiti artists or street artists as their ‘legal’ term would deem them, have always expressed themselves through the corridors and alleyways of our streets.

They tell the stories of our people, their strokes hold great meaning, sometimes social and political, sometimes abstract and beautiful.

Its revival means that art is walking outside of its comfort zone, and into the streets around the building in which it would’ve hung.

Graffiti art has for the earlier part of the century been considered a burden, perhaps a rebellion sport, but the evolution of art and what is considered worthy of its name has prompted governments, communities and groups to commission its brush stocks on their footsteps.

The emergence of street art as trendy is changing the social connotations of ‘graffiti’ to one of acceptance, and now artists are more than ever keen to show their faces.

So as Brisbaneâ€™s street culture is becoming stronger and street artists are emerging with a keen eye to express themselves, why are public art spaces harder to find?

Some graffiti artists agree, Brisbane is behind the rest of the world in terms of accepting street art and having that art stay up, prompting many of them to move overseas, work ‘illegally’ or paint on canvases.

Artists such as Anthony Lister, a world famous and abstract drawer had his art destroyed by the city council only a few months back because they failed to recognise its worth, resulting in $15,000 dollars worth of art being erased from our city walls.

These actions have prompted famous artists like Lister to take art elsewhere, such as Argentina, Indonesia and America, places that artists claim are more open to the idea of street art.

Like Lister, Fintan Magee a local to West End and now an internationally renowned artist, has also seen the demand for street art around the world, leaving Brisbane behind in search of empty walls. 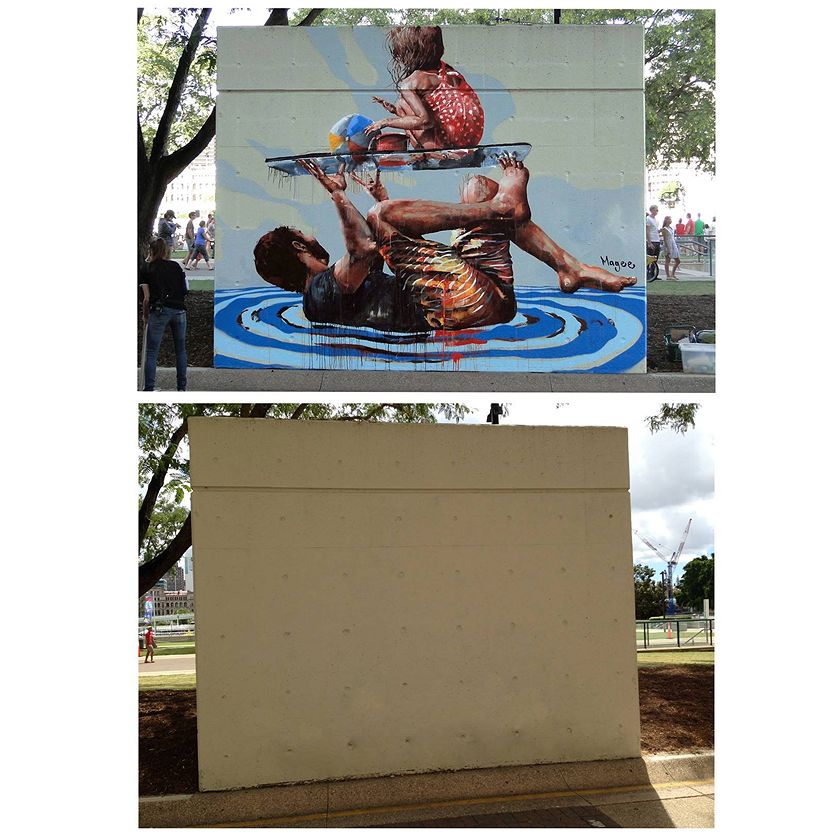 He told the ABC, “I had a work removed from a wall inside the cultural centre in South Bank that got a really good response… and the work only lasted I think five days, I wasn’t in the city when it was removed, and it was done without any sort of community consultation.” He said, “It’s quite disheartening yeah, when you get a good response from the community and the council go and paint over it anyway, regardless of that community response.”

Brisbane has embraced some of the culture of street art following its counter-part Melbourne into the scene. We have seen cultural revivals of industrial areas, of areas around the city’s alleyways and even in places like Fortitude Valley and West End where street art is common.

But as one local artist describes it, legal spaces are hard to find but it’s even harder to maintain creative control. “It comes down to respect, there’s none of it in Brisbane anymore, they don’t know the history and they paint over you regardless of who you are, or how long you’ve been in the game,” tells Vane who forms part of a graffiti duo with his brother Flay.

The local duo believe that an industry solution would be to help bring more knowledge to communities about street art, they also suggest that Brisbane is in need of more legal walls made available with a heavy focus on expression and respect.

These designated areas can have both the community and the councils backing, and will result in less work being destroyed, leaving artists able to paint freely without having others destroy their work.

“If they gave us designated areas where we could practice our work legally, it would make it more fun because people would be expressing their art and not be chased away,” Vane said. “It’s upsetting as we’ve had walls legalised years ago and now you can’t paint there anymore,” he said.

Fintan Magee says that he doesn’t have plans to commission much more work in Brisbane because of the council’s display and attitude to street expressionism, and the lack of respect for creative control over areas. So for now he will steer clear of artistically tagging our river-city.

Street art is an integral part of the urbanisation of concrete cities because it allows for artists to express themselves in a public forum.

Culturally significant, street art is important for communities but also for the stories which personify the very lives of the people who live behind those walls.

Cities like Barcelona, San Fransisco, Berlin and Bogota have all culturally embraced the need to tie street art into community living and urban spaces, that flourish the idea of integration by embracing creative expression.

Whether the slow death of street art here in Brisbane is reminiscent of blurred lines between council approval and public art spaces, or whether the conversation hasn’t yet been had between artists, the council and communities, Brisbane’s street art culture is still alive.

A relatively young one at that, it is bursting with talent and readiness for when more public space finally becomes available and here to stay.

Image:Â Fintan Magee work in South Bank before and after painted over. Photo credit: ABC