Brisbane Writers Festival swept through Brisbane earlier this month for its 59th year in operation.

It was a hybrid online/onsite event that saw tens of thousands of devotees to the written word flock to the State Library of Queensland and assorted venues or to their technology of choice, in the comfort of their homes.

Sarah Runcie, CEO of Brisbane Writers Festival sat down with us this week to chat about the success that was the BWF 2021, the program for next year, as well as her personal highlights from May 7-9 this past month. First, we asked about how the festival has been running the past 60 years and what has kept it going.

‘I’d have to have been around for the last 60 years to answer that, but I think one of the reasons for that is that there is quite a strong community of authors and poets in Brisbane and in Queensland which I think is an underrated and to a certain extent, under-celebrated aspect to Brisbane culturally, and Queensland more broadly. I think that was actually the catalyst for the BWF, or what its original incarnation was which was the Warana Festival…and was the origin also of the Brisbane Festival in September…We’re not the oldest writers festival in Australia. Adelaide began, not in 1962 as we did, [but] in 1960. Different to Adelaide, our festival has run every year, so in fact, it’s the oldest continuous writers festival in Australia.’ 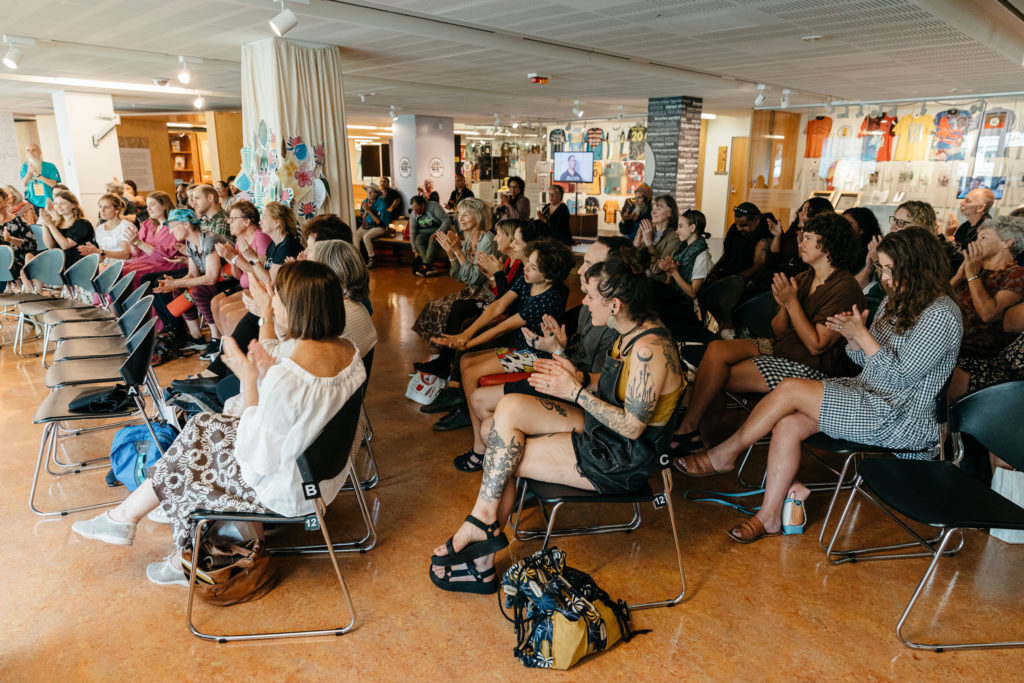 Moving on to the success of this year’s IRL and Online hybrid model we asked about the key to its success and its most successful aspect.

‘There were a couple of things that were successful about the hybrid model. Part of the catalyst of having the hybrid model was of course to have online content available during that festival in case there was a shutdown. So that at least audiences would have the opportunity to enjoy BWF content delivered directly to them in a sense. And I think that that is part of the success of it because some of our older patrons were grateful for the opportunity to still see BWF content, but were not feeling like they were risking their health by going out to the onsite festival. Having said that, having the on-site festival was still great because I think there is a degree of real hunger to be able to get back into having live events.

Next, we wanted to explore what the highs and lows of this year’s iteration were. So, we asked about any challenges that might have been faced during the planning and execution of the event, as well as what Sarah’s favourite events were. Sarah, as eloquent and forthcoming as she had been throughout the conversation, said that the main challenge came with the uncertainty of the coronavirus and its potential to cause a snap lockdown at any given moment.

‘There was still some uncertainty which meant having to program in a way for more than one scenario, I think was a significant challenge. Especially after coming off the back of a year in which we had taken a financial hit. There are fewer resources in order to mitigate doing that kind of planning. With fewer resources, in essence, we were having to plan for several scenarios.

Then we had interstate authors that might for instance be programmed in part of the panel, our interstate panelists were not the majority of the panel, so it was possible that we could beam one in if they couldn’t come and still have the majority of the people there for a live event. We were able to mitigate risks in that way, and then of course our internationals being wholly online. We were able to manage those kinds of scenarios which was down to the planning and programming.

Personal favourites – in terms of the onsite festival I think we did some events which I think we will do more of next year because they were so successful. So, one of my favourite events was a conversation between Kate Morton and Michaela Kalowski which was done on Mother’s Day, it was sold out, and was a really delightful high tea with Kate Morton and Michaela, in conversation about writing. And that was a really lovely event.

Similarly, we had a great poetry event, with I think it was about seven poets and that was held at a venue called Wandering Cooks, which is a bar and restaurant, and that sold out as well, in fact, we had to kind of move the space around because we had so many people on the waitlist. We ended up having to release more tickets or consider running the event a second time. Which I think is interesting and I think that speaks to something that is unusual in Queensland and which is a strong following for poetry.

I’d say the highlight for me for the online program is that it is so high quality, in terms of the people that we have. High quality, and really varied. And I’ll say that as a whole for the program that it’s quite a well-rounded and varied program, on the whole. Which I think is a challenge to do in our current environment.’

Next year is a big and special anniversary for the BWF marking its 60th year in operation. The enthusiasm poured out of Sarah as she explained what Brisbane has in store for the next festival. Not only will the hybrid model be maintained, along with fan-favourite events, but also the newly inaugurated First word and Last word will be kept on as a staple – featuring and honouring first nations authors and writers. There will also be a focus on ‘Brisbane as a “storied city”’ a geolocating app, compatible with the festival, a collaboration with the Brisbane Street Art Festival, and much more.

‘So many things. So next year will be a big year for us. And one in which we want to really celebrate what is the unique cultural legacy in, not just for Queensland culture-scape, but actually Australia with the BWF. And to that end, we want to celebrate those things that are really part of the cultural DNA of the city of Brisbane, but also specifically BWF. And I think one of the things that is defining about the BWF is that it has had over a long period of time quite a strong first nations author presence. And I think that that’s quite a special thing. Other festivals probably up north, Cairns, and Darwin and so on, have had strong first nations presence, but I think what’s special about Brisbane is that it is such a long-running festival, that has had that presence over a long period of time, and I think that’s quite a special element…First Word reflects on the program, and Last Word reflects on the discussions of the festival. And we were very lucky to have Ellen Van Neerven deliver the first First Word and Last Word. And First Word and Last Word will be from here on in, a permanent part of the festival.

And I think what is also really valuable about what we did this year and what we will probably expand on with our writers, is that we are also seeking to really commission more work as part of the festival through addresses like the Marion Taylor and like First Word and Last Word. Which I think also adds to the richness of what BWF brings to Brisbane audiences… I think that’s also part of what we’re doing in terms of the festival. Another thing to look forward to is new partnerships.

We will [also] be initiating next year, a new part of the festival, which is a country or region of focus within the Asia/Pac arena. And that particular element of the festival will bring authors from that particular area and provide Brisbane audiences with a unique program that is…[like] a dégustation menu of what the literature and storytelling and poetry is from that particular area and next year our first country of focus is Aotearoa and Pacifica. What’s interesting is that not a lot of New Zealand and Pacifica authors and writers have really penetrated significantly into the Australian market. They are our nearest neighbours but we actually have very little engagement with some very fine writing and poetry that is happening and has been happening for some time just up the Tasman so this is a kind of unique program in the writers festival sort of sphere.’ 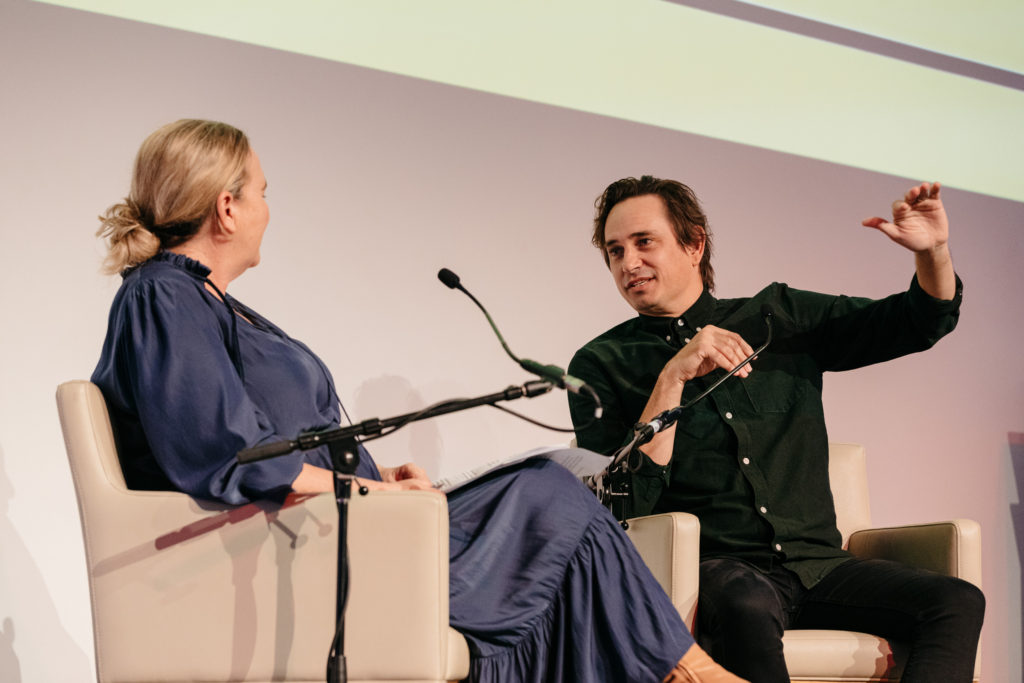 BWF also has recently received $198,000 in funding from the government initiative, RISE. Through this funding, BWF will have the chance to keep, maintain, and expand on important conversations such as those surrounding author/editor relationships such as in the author/editor showcase. Having released episodes and engendered onsite conversations featuring literary legends such as Mem Fox, Maxine Beneba Clark, Nardi Simpson, and Meg Mason, and their publishing and editing counterparts, Sarah said she found Brisbane audiences receptive to knowing and understanding what goes on behind the curtain.

‘So this year we launched a new part of the festival which was an online series in which we bring authors and editors in conversation to one another, so it is an examination of the author-editor relationship and process. And the reason for that is that it’s a look a little bit behind the curtain of what is a key creative, collaboration in publishing. It’s so often hidden, and to a degree, it has to be. When you buy a book by an author, you’re buying the author, not the editor. But often editors have had a significant and critical role in the development of the stories you buy. And this was an opportunity to look at that collaborative element in writing. Which is not often understood. I think that there is even a perspective that writers emerge with perfectly formed manuscripts from their garage and deliver them to venal publishers who then print them and then make money. And that’s actually not the case…And it was an opportunity to examine to a certain extent, the magic but also the mechanics, of a really key creative collaboration and I don’t know of anything like it.’
Finally, we parted with Sarah but not before asking what she hoped audiences and participants gained from BWF at the end of the day.

‘I think if I want audiences to go away with anything, it’s a sense of the power and magic of a well-written story, and the well-chosen word, and what that can move and change in yourself.’

For those of you curious to know more about BWF, to sign onto their newsletter, or to see what’s in store for next year as the program develops, check out their website here.

Live Review: You Am I @ The Zoo