Caesar: A Fresh Retake on a Classic

Five fierce voices weave together in a rich tapestry for a retake on a classic play. La Boite’s Caesar promises to be like no Shakespeare you’ve seen before.

Told in five acts with humour and sarcasm, this sharp satire opens discussions on gender, power, and politics. We had a chat with playwright Jean Tong on the play.

The Creative Issue: What inspired you to rewrite Shakespeare’s play from a fresh new angle?

Jean Tong: Sanja, the director, approached the five of us playwrights initially. I was curious about what we could bring to the original text, and what the adaptation approach was. We used five different writers who all have different styles. The idea was to see how we would approach it like an ensemble of writers and what that would bring to the text as a vision. For me, what was intriguing was the ongoing cultural obsession with Shakespeare and what that means, as a cultural reference. I mean, I’m 26. I enjoyed it when I was in high school. People keep doing it because it’s just entrenched. Also, it’s free because you don’t have to pay a commission for Shakespeare because it’s out of copyright. So, you know, the sort of cultural ramifications around doing Shakespeare were intriguing. Then the play. I think it has fascinating touchstones in terms of what makes a dictator and what does it mean to try and overthrow someone in power. Do the means justify the end? All those questions, I think, are relevant.

TCI: What are some challenges in working with such well known material?

JT: I think the biggest challenge is that people do come with preconceived expectations. You need to manage those expectations properly, and get the message across from the start, that it’s going to be a radical approach. They’re not coming in to see 12 actors wearing Victorian costume. I think if that’s not clear, that’s how you often get disappointed audiences because people want what they pay for. So, it’s just about mitigating what people think they’re coming in for and trying to get them excited about this approach. 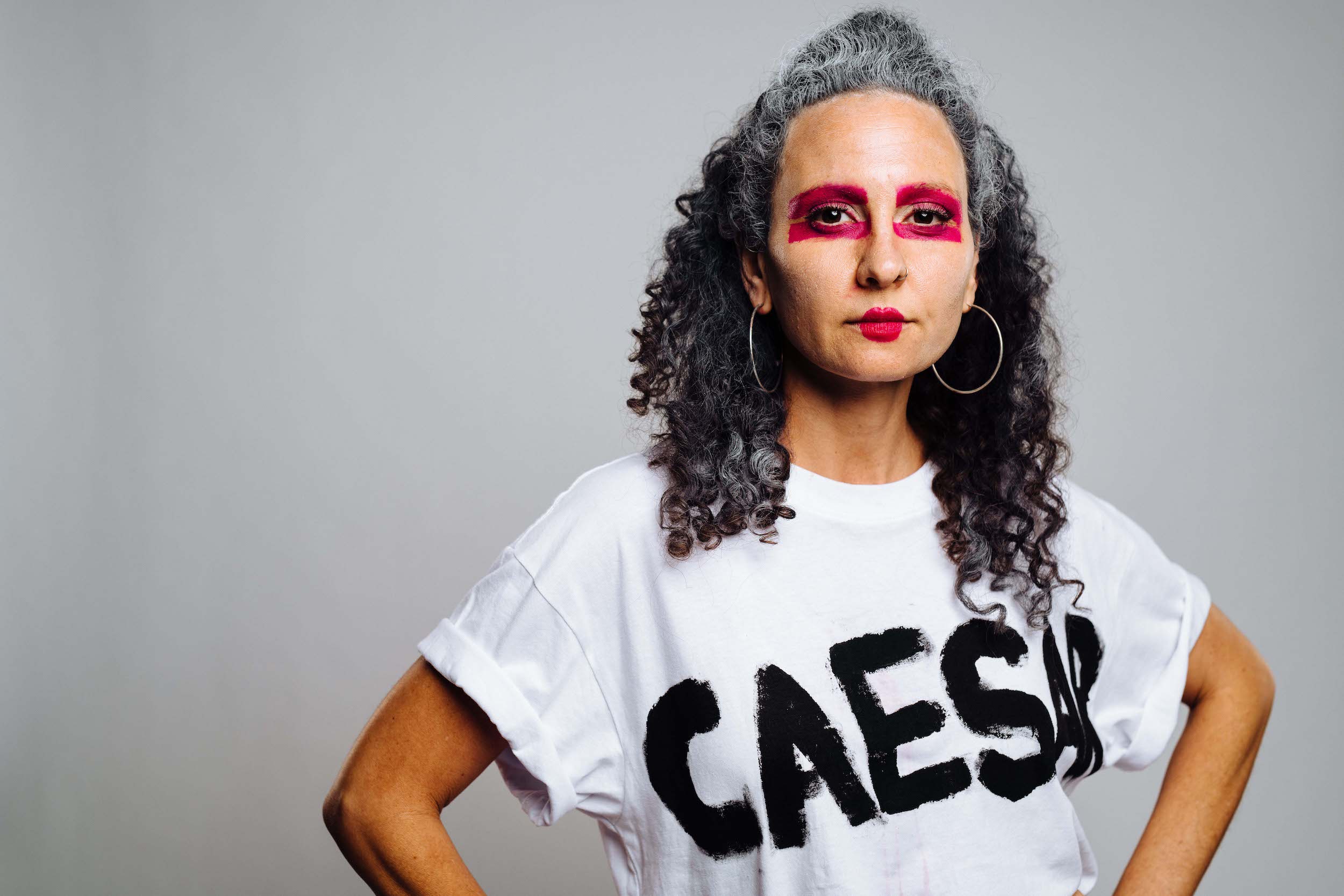 TCI: So how much of the original language does it use?

JT: Not much! So, the approach is, we’ve lifted the story of Caesar and superimposed that on to a group of actors who are trying to put on Julius Caesar. The power dynamics and the themes of who’s trying to overthrow people in power have been placed into the relationships between the actors. The rehearsal room and the stage become the backdrop of Rome. They’re all speaking not normal English. If you’re a big Caesar fan, it’s full of cheeky references and nods. But if you don’t like Shakespeare, I reckon there’s only about five pages of Shakespearean Elizabethan English. Shakespeare is poetry and there’s pleasure to be gained from that. But it is also quite inaccessible as a form of entertainment now because that’s not how we communicate. So, it’s little Shakespeare.

TCI: What was it like to collaborate with the four other writers on this project?

JT: It’s been quite fun. I think we’ve never all been in the same room. We’re all in different states. There’s a couple of Victorians. A couple of Queenslanders and people who are often traveling in different states. So it’s all been on zooms that that has definitely been challenging in terms of long workshop days, and sometimes it’s hard to communicate and get that sort of natural rhythm and camaraderie on zoom. But, it’s been led by the director, so Sanja has been the one who to shepherd us through the chaos. It’s always tricky bringing together so many different writers who have different interests and different style. We eventually landed on this sort of shared, playing space. And I think what’s emerged out of that is unique. And quite fun. You still get a sense of everyone’s different styles, but it’s through the same characters or the same world. So I think it’ll be satisfying.

TCI: Tell me a bit about your process when writing plays?

JT: I figure out what I’m going to write about, then I just sit down and write. I’m a pen and paper person. I’ll find my old scripts of other plays and write on the back. I try and force out the script and the ideas. After that, I’ll have a big stack and start typing and editing as I go. But it’s driven. For me, I plan in terms of structure and I have to know the ending. I need to know where the story’s going. In this case was just knowing that it was going to end in Caesar dying on stage, and that sort of iconic stabbing scene. Knowing the direction of where the scene is going to go, and how all the characters are going to have to behave to get to that point is what I just use that as a backbone, and write around it. 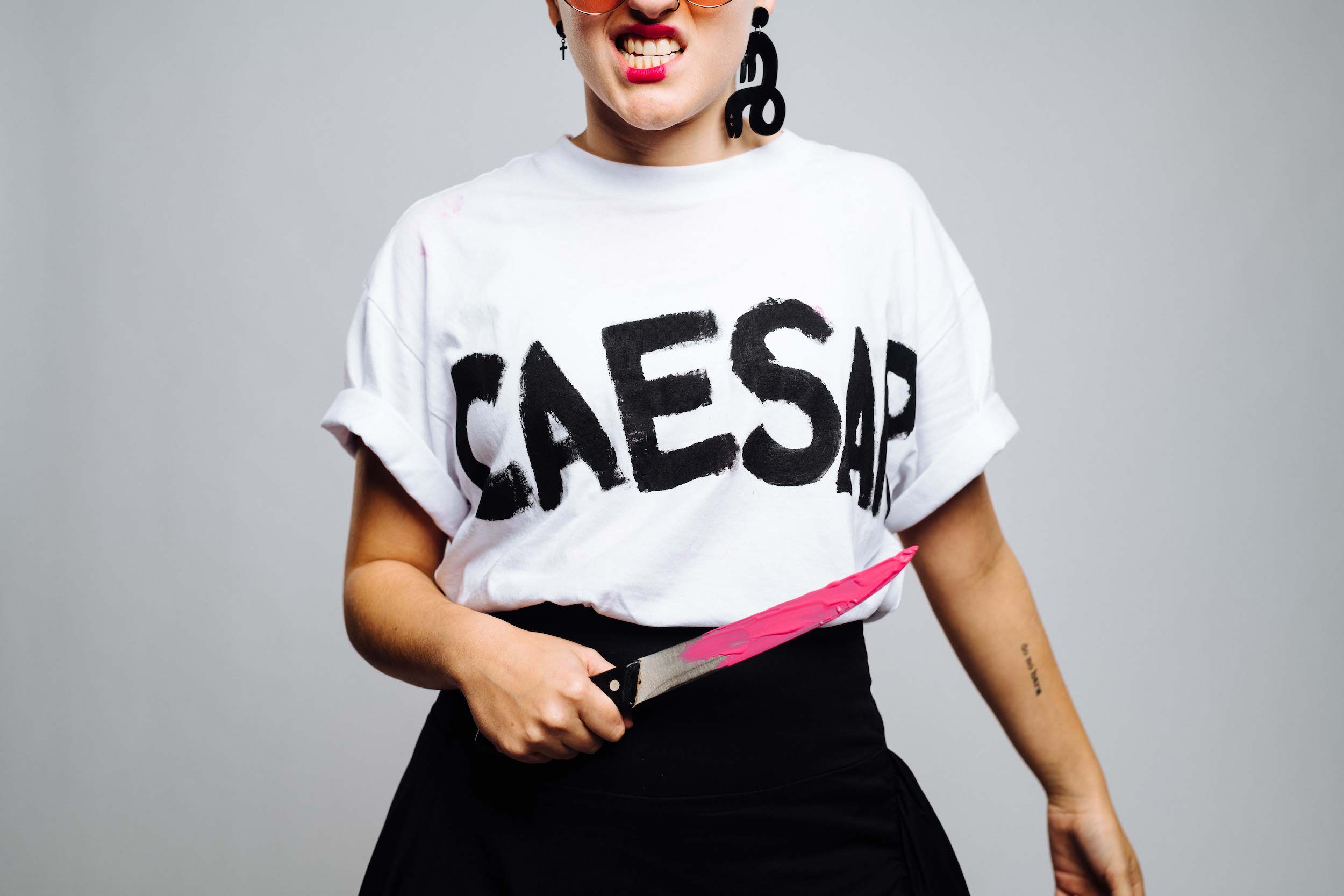 TCI: What’s it like to work with La Boite?

JT: It’s the first time I’ve worked with them. So, I’m quite disappointed to not be able to be in the state, since I live in Victoria. I met everyone in the company on zoom. It’s a bit of a weird experience in that sense and it’s definitely different. But it also meant that because they didn’t have to pay for people living in a different state or air tickets, they could collaborate with interstate artists. So, it’s a double-edged sword kind of thing. It’s been good. My main contact has been with Sanja. It’s got a play focused approach. We landed on quite a wild version of the show, and it’s definitely not what they initially planned for. But the crew and creatives, like the designers who have had to cope with us changing what the show is quite close to the start of when they had to produce a set have been flexible. They’ve been willing to run with what we as the writers have sort of thrown at them. It’s been amazing to just work with people who are willing to just up and go with whatever gets thrown at them.

TCI: What can the audiences look forward to in the play?

JT: They can look forward to a version of Caesar that I can pretty much guarantee that they’ve never encountered before. It’s funny, while still dealing with the kind of underlying themes behind Julius Caesar, presented in a contemporary lens. There’s a lot of tongue in cheek humour and a bit of self-awareness. I think audiences will like that it feels alive as a play. It’ll be exciting to be able to come to something like that. The play’s 400 years old, but it’s been recreated and speaks to today.