Calculating the Gravity of Love: The Mathematics of Longing

I’m always excited when arriving at La Boite’s Roundhouse Theatre. Knowing what a challenge theatre-in-the-round is for production, I love that moment when the actor speaks directly to me with their back to the rest of the audience, that feeling that I am a part of something private, personal.

The Mathematics of Longing, presented by La Boite, The Farm, and The Uncertainty Principle, did not disappoint in this regard, opening with the five performers walking out to five standing microphones prepositioned around the stage. With each section of the audience directly spoken to by one of the cast, I felt as though performer Todd Macdonald had something pivotal to say for only me and my surrounding audience members to hear. 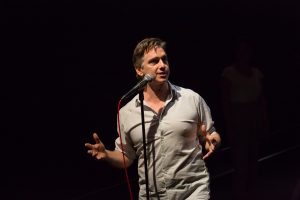 Written by playwright Suzie Miller, The Mathematics of Longing explores the hidden depths of human emotion, equating Einstein’s general theory of relativity to the push and pull we all feel in our relationships with those around us. Particularly resonating was relating the effects of relationships with gravitational waves, theorising that just as gravitational waves affect a ripple in the surrounding space, the effect of personal relationships on our lives ripples beyond that immediate connection. Haven’t we all felt first-hand how the intricacies of any given relationship affect every aspect of our lives? When you’re buying groceries, you pause to consider if your special someone would prefer chocolate ice-cream, like you, or vanilla. When you lose someone, you don’t just experience your grief but the grief of those around you as well. 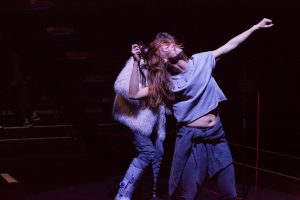 The cast of The Mathematics of Longing converged to explore a complex abstraction of the matter that makes us all individual. Even at the moments when the heavily physics-related dialogue threatened to displace my attention, the eagerness of the cast to express something almost revelational and critical for me to understand drew me back. That’s not to say the cast was incredibly convincing at all times, as evidenced by the lacklustre intimacy between Kate Harman and Gavin Webber during one entangled, sexually taxing scene. 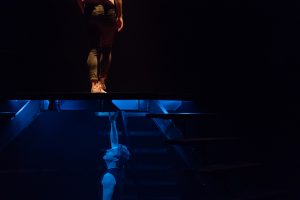 At times the production felt like an onslaught of information with the cast simultaneously performing an idea physically while the dialogue explored the same. Seeing performers entangled in cords while simultaneously being told through the dialogue of the entanglement relationships cause felt diminishing to the concept. But recognition must go to the design team, Ross Manning, Anthony Spinaze, Ben Hughes, and Ben Ely, for the visual treat the production delivered, another phenomenal set and lighting design for La Boite’s Roundhouse Theatre.

The Mathematics of Longing is a science lesson, a psychological exploration, and a rock concert on stage. The play provides the audience with a scientific and calculated ideology on an emotion experienced by all: longing. And by exploring the in-depth themes with comedy and direct address, the production balances dark and light to produce a visually stimulating and thought-provoking experience.

What: The Mathematics of Longing