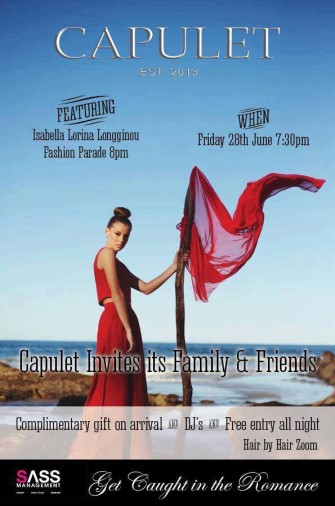 As one door closes, another one opens.

For entrepreneur Leigh Metzeling, the space previously known as Alloneword has opened the door for his latest business venture – Capulet.

Metzeling has been in the Brisbane entertainment scene for seven years, and his latest foray is set to shake up Brisbaneâ€™s nightlife scene.

Capulet is expected to be at its core a high-end cocktail bar, but what sets it apart from other venues will be the fashion edge that Metzeling wants to incorporate into the Capulet concept.

â€œAfter traveling overseas and interstate over the years, I came to realise that there was something missing in Brisbaneâ€™s bar scene,â€ Metzeling said.

â€œWe wanted to create a personal and intimate experience for people in an ultra-modern setting, whilst maintaining a premium level of service,â€ he said.

â€œImagine watching a fashion show with a cocktail in hand, in a trendy but comfortable atmosphere â€“ we think Brisbane will fall in love with the venue,â€ he said.

Capulet will bring a touch of romance and sophistication to Brunswick Street.

Launching tonight, Capuletâ€™s opening party is set to exude nothing but opulence and class.

Itâ€™s a party not a festival