If you travel to Sandgate you will likely come to a confusing triangular shaped roundabout that leads to Sandgate Town Hall. Sharyn Henry, actor and theatre director who founded Elysium Theatre in 1999 sometimes hosts professional theatrical performances at this hall. The sharing of a public place means that at times, rehearsals take place outdoors, as inÂ the case ofÂ A Chip in the Sugar starring local actor Toby ChittendenÂ thatÂ Sharyn directed earlier this year. She says simply, she decided to start a theatre “to offer different facets or genres of theatre,” to her community.

Performing theatre on impromptu outdoor stages as her company does, has roots in the Commedia dell ‘arte tradition popular in Italy during the 16th century. Intentionally, the beaked heads of Captain Babbeo and Cucuba types, caricatures modelled onÂ military personnel, form Elysium Theatre’s logo. It is the first I’ve heard of this ancient comedic tradition, and the masked characters designed to satirise certain types of people, usually those who held prominent positions in society. Later these beaked characters informed the original marionette. Sharyn has recently bought one of these, a device she explains helpful to becoming a better actor, or director. A marionettist or puppeteer needs to be able to project physical movements ontoÂ the puppet, making it lifelike. In manipulating the puppet’s limbs, the puppeteer must also be aware of the audience, altering the puppet’s dialogue andÂ actions to imitate actor initiative. Â To understand the relationship between what happens on the stage and how it is transmitted to the audience, then incorporatingÂ that information into actions and verbal dialogue is something that all performing artists rely on. 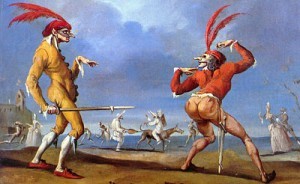 When I ask her about her penchant for choosing morally challenging pieces, such as the The Untouchable JuliÂ currently playing, Sharyn introduces me toÂ Dario Fo & Franke Rame, two Italian playwrights known for writing and producing fearlessly controversial plays, often censored because of their political material. Like Dario & Franke, Sharyn says that theatre isÂ â€œa vehicle for reflecting what is going on in societyâ€ and the delivery of high quality, thought-provoking theatrical productions is Sharyn’s aim. “It’s important to have an opinion. Â Opinions matter,” she says. “The goal is to create discussion.” It is not a quest for sensationalism to have this goal, but creating a theatre has it’s responsibilities, and that means to create a space where who we are, or think we are, or whom others want us to be, is left at the door. What happens after this is a journey into another place, in the mind perhaps, but Henry’s idea of this place is like the fields of paradise in ancient Greek philosophy, where the virtuous got to spend the afterlife surrounded by beauty and poetry if they so desired. This spiritual place is called Elysium.

Sharyn is currently working with Brenna Lee-Cooney. Who is Brenna? Brenna is Fractal Theatre director, Matilda award winner, and recently, writer of the theatrical adaptation of The Untouchable Juli. James Aldridge originally wrote the book in 1976, about a boy’s suffocating experience as a mathematical and musical prodigy during Australia’s 1930s depression. Art and austerity should got well together, the former making the latter bearable – Winston Churchill said something similar – but rarely is it the case. Â At times when money is tight, the cultural arts seeming to be too luxurious, hedonistic, an irresponsible indulgence. Fighting against these notions creats some darkly humerous moments. On top of this, Brenna uses original Australian swing music for the sountrack. There is nothing that doesn’t sound great about this production that is performing at Sandgate Town Hall on 30th and 31st of July. 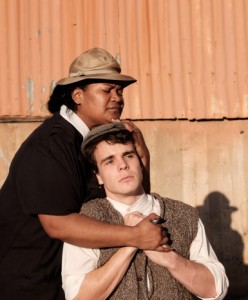 Before I leave Sharyn offers to show me around inside Sandgate Town Hall. Unfortunately a small group have dibbs on it first so we peek through the door at the gorgeous interior of the HallÂ and say our goodbyes under the huge grecian-inspired columns. But then Sharyn’s theatre is not about a hall, a location, a precise art form. â€œIt would be desirable for Elysium Theatre to be considered a benchmark for quality,â€ she states simply. Or perhaps, a state of mind.

What The Untouchable Juli