For a band in the strides of a national tour, as well as a group who would have barely finished their Brisbane set before being whisked away to Byron Bay for the opening of Splendour in the Grass, Sophie, Matt, Nick and Ethan seemed fairly relaxed.
A band well deserving of recognition after heavy circulation of recent releases ‘Suck’, and ‘I Don’t Think You Like Me,’ the name Tired Lion seems fitting for a group that had previously lain low before quickly sinking their teeth into the punk-loving population of Australia.Â
TCI: There’s a lot of punk happening in Australia at the moment, how did you guys first put yourself out there?

Nick: We’ve always played this kind of music, all of us got together. It’s the music that we were listening to when we were in high school, when we were kids and we first got into music. Nirvana, Foo Fighters, Pumpkins, which has the element to it.
When we first started, it wasn’t the ‘thing’ – it wasn’t in. We stuck to it, tried our best, and now I guess we’ve come full circle, maybe it’s back in, that’s why people dig what we’re doing.

TCI:Â Did you each have a certain influence, or did you have one singular one as a band?

Nick: It’s definitely all different, we all had different musical upbringings. Matt, you discovered the Smashing Pumpkins, and that was a huge thing. And he managed to influence Sophie with that.

Sophie: Yeah, Matt introduced me to the Smashing Pumpkins, and after he did that I was like “Yeah, this is what I want my band to sound like.”

TCI: No Rage Against The Machine sneaking it’s way in there?

Matt: Well last time we were on tour with British india, and on our final show we got up and did a RATM cover: Killing in the Name. A bit of an impromptu kind of thing. And Ethan and me we’ve been jamming for years, when we were kids we’d be playing Rage Against the Machine. We actually used to play Metallica and Megadeth. No shame in that.

TCI: How much angst on average goes into a song?

Sophie: A lot of angst from all of us.

Nick: There’s not much in general that we’re happy about.

Sophie: I guess musicians, artists, have their own brain that works a bit differently, I feel. I guess a lot of stuff gets to us more that the average joe, so I guess we’re better at expressing our angst, because we’re used to it.

Matt: In the instrumentation side of things, we try to make everything as raucous as possible.

Sophie: Raucous is the key word.

Matt: We all have something we just want to get out. 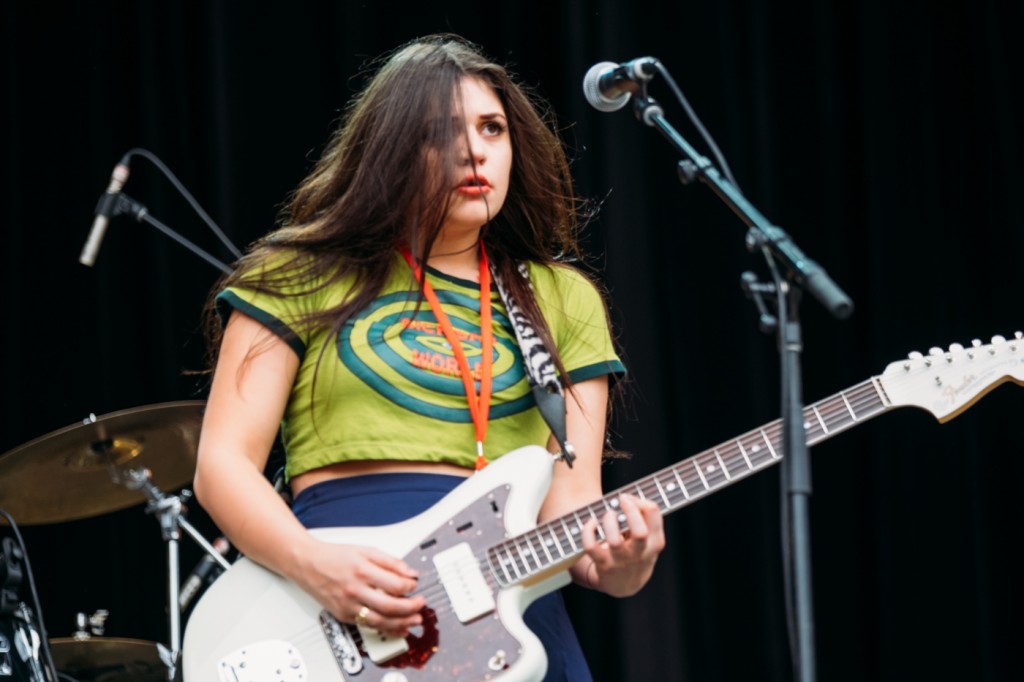 TCI: Is there much crossover with instrumentation, vocal work, etc?

Sophie: Matt helps me with the vocal melodies, and we all put our two-cents in, but there have been a lot of times when me and Matt get together, and he’s written down some lyrics, and we try and fuse our ideas together.

TCI (To Sophie): A question you must get asked a lot is ‘Do you have any musical heroines?’

Sophie: I hate that question, a lot of people assume that just because I’m a girl, I must be highly influenced by female musicians. “I’m doing it for the girls.” It just sucks that people put females on that level- I just find it a bit silly. One of my favourite singers would be Billy Corgan.

TCI: You recently won the Splendour in the Grass Unearthed Competition, this not being your first time at a festival, how do you think it’ll pan out?

Matt: Our second festival technically. We played Groovin the Moo earlier this year, but this festival’s a lot bigger.

Sophie: And it’s in a different state as well.

Matt: So obviously we’ve traveled across the country for it as well. And it’s gonna be broadcast live on TripleJ as well, so there’s a lot more elements to it as well. A new experience for us.

Sophie: I think everybody has their doubts at times. It’s a big deal that it’s getting broadcasted live, so if my lead breaks or something goes wrong… I’m fairly confident that we’ll be fine. We’re a pretty tight unit and we’ve been touring for a bit now. I think the main aim for us is just to get up there and enjoy the moment rather than fretting about it.

Matt: We all do what we do. Obviously someone’s seen it and digs it, and given us the opportunity to go up on this stage. I’m pretty confident that all of us can go up on stage and just do our thing.
The only thing that can go wrong really is a technical issue, but who the fuck wants to worry about that? Shit will happen, but I’m confident that we can smash it.

TCI: And if someone does screw up royally?

Nick: To be honest I’d probably remember it more.

Matt: Well, look at Jimmy Hendrix, playing at the Isle of Wight, I think it was his fourth song in. Amps and things were a lot more basic, and his amp was picking up all the security guards two-way radios. So whenever there was quiet you could hear the security guards talking to each other. I look at that think that I’d be fucking embarrassed, security two way radio going from front of house to the audience so that everyone’s hearing it? But I also look at that and go ‘That’s fucking raw,’ and that’s what I identify the song with.
A fuckup can be good, sometimes. That’s live music.

TCI: If any were you were given a mic-grab opportunity, who would it be in which scenario?

Despite an absence of fuckups, Tired Lion played a perfectly memorable opening set on Friday Afternoon.