Everyone remembers Vampire Weekend.
Everyone ever, and more so when played anything from Tasmanian outfit Chase City, whose own interpretation of uplifting chords and bubbling tempo combined with an urge to toe-tap a hole through your floor has had Australian crowds doing just that throughout their last 3 national tours. With an extra splash of sunshine to the music that could only come from the local hole in the ozone layer, the band’s newest track ‘I Lost Myself,’ yielded a glowing response from Triple J’s Lachie Macara in late 2014.
Creative Drinks took the time to sit and chat to Tarik and Michael before their Trainspotters show a couple of weeks back.Â

CD: Keen for Trainspotters tonight, and what do you think the turnout will be like?

Tarik: We have no idea.

Michael: We played at Alhambra Lounge last time, which is easy because it has a regular turnout. We’re kind of expecting something better than previous years in our third time [in Brisbane].

CD: The train times are up on the wall in case anyone from the Gold Coast needs to make a quick one home.

Michael: Well, Brisbane’s about as far away as we play from home, often the closer we are to home the bigger the crowds, so this should be interesting to see.

CD: People often view Tasmania as a pretty gloomy place, while you guys play a fairly sun-drenched form of music. Is there a particular spot you think back to while writing and playing?

Michael: When it is sunny down there, it gets really hot. It’s the hole in the ozone layer. So when it is hot you’re undercover and when it’s rainy and wet it’s not that great. But we don’t really think of places, even though I’m actually a tour guide back home. There’s a lot of drug-punk in Tasmania that’s probably because of the crappy weather, and no real established scene other than punk.

CD: Looking at your Pozible campaign for the making of the video for ‘I Lost Myself’, and the video itself, how long did you have to stay on that couch for during the hyperlapse video production?

Tarik: Ages. We did it for the whole day so there were times I had to sit for about an hour and then leave for 10 minutes and come back for an hour or two. It was kind of annoying because we wanted to do it on a Saturday, all the people could have gone out afterwards and it would have been easier. We had some stupid beerfest show so we ended having to do it on a Sunday night. We supplied free beer all day, pretty much all of the Pozible money went into that.

Michael: We just used our mates, and it did pretty much turn into a party.

CD: Was it tough putting yourself out there in terms of crowdfunding $2k?

Michael: I didn’t really want to do it but we were getting kind of desperate, spending a lot of money on the release. I had a guy in Melbourne that does a lot of that kind of thing with bands and he said “You’ll get it,” and while not too many people in Hobart really listen to us, actually most of the donations were from the mainland, a couple in Sydney and Queensland. 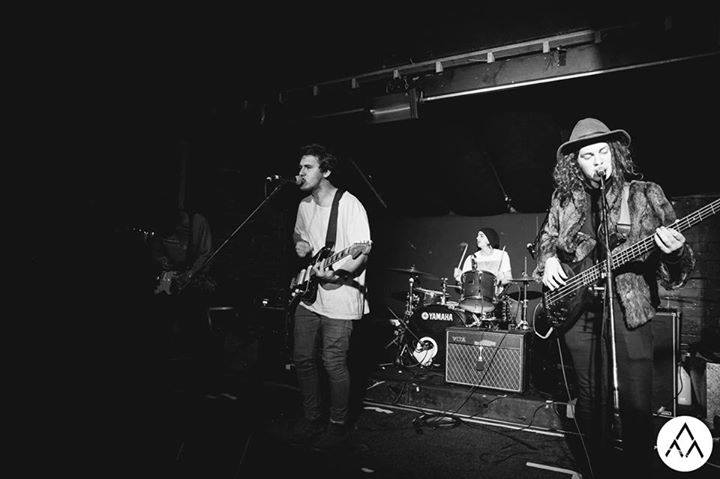 CD: So any local love?

Michael: Tassie we have people who like us a lot, but we don’t really focus there much anymore. We have our following here, and Melbourne, Sydney and Brisbane we’ve been focusing a lot on recently. In the next year we’ll just have to keep coming back to them.

CD: I can hear steel drums making an appearance in a lot of your songs, have you thought about a taste of the Caribbean working it’s way into a next album?

Tarik: It’s funny, I actually heard an Australian band covered by steel drums and thought it sounded really cool, so I patched them into my synth and we’ll play it in a whole song tonight, although we might get an actual player when we record it.

CD: How was working at Applewood Lane with Magoo?

Tarik: Â It was great, although we won’t be going back unfortunately because he sold the place. It was a paradise, we had the pool, it was just awesome, I can’t even describe it. We had awesome times there, and we weren’t used to having hot weather. We’ll be at Byron Bay next time, Studios 301. But Magoo was just plain to start off with, but we started farting a lot, and we broke him open. There was a point when he was just doing his thing, fully serious, then he let off the dirtiest fart, I think that was the funniest thing that ever happened, just not expecting it. He’s a genius, and he was really good at getting along with us, and it’s good to work with people like that.

CD: Ever had a shitty recording experience?

Tarik: No, but I think lucky not to [have]. The music industry seems to breed really good people, and then just shit fuckers. Some people you meet you think, ‘If I had to spend three days with you, I’d punch you probably,’ but not really.

Michael: I guess there are people who are driven by money, but us and the people we work with are a little more driven by making good music.

CD: You had an EP drop, as well as the latest track.

Michael: Yeah, we’ve got two singles off this album that we’ve done with Magoo, and it’s right after this tour that we’re heading to Byron, do some more recording, and we’ll release a new song in about three months. It’s a step up from Applewood. A band in Tassie called the Middle Names did the same thing. It’ll be better this time because the 301 has all your own accommodation and pool, a little more modern and it’s right on the beach. And it’s Byron.

CD: So you never turn to your social media fans for a place to crash some nights?

Tarik: Last night! It was in Toowong. We have 3 or four of us here so half the time we just crash at people’s houses. It was really good having somewhere to stay because from Sydney to Brisbane we were all in the van, with people doing two hour shifts. We drove for 14 and a half hours. Right now we want somewhere to swim, is Southbank Beach any good?

I told them it’s heaps good.
Chase City finished it’s mainland tour on the 7th, and are now back in Tasmania before they head to Studios 301 to record their newest release.

Catch a sample of their previous work here: