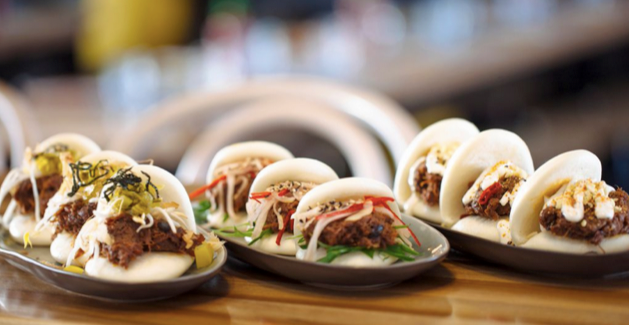 Chop Chop Changâ€™s at West End offers delicious, hawker-style Asian foods, thatâ€™s big on flavour. The diner is taken on a trip through Asia with â€˜street foodâ€™ dishes from across the continent featuring on the menu, with a strong focus on Vietnamese and Thai flavours.Â

Do you feel like Japanese? Try the ginger and garlic chicken Karaage.

Chinese? The stir fried Szechuan eggplant will amaze you.

Have one, have them all. At Chop Chopâ€™s you can nibble your way through a wide repertoire of cuisines.

Throughout your nibbles, Chop Chop Changâ€™s asks you to remember one of Buddhaâ€™s decrees- â€œHappiness never decreases by being sharedâ€. What better way to share happiness than with food?

Whilst Chop Chop Changâ€™s offers traditional street food, found throughout the streets of Asia, they are invigorating it with a modern twist. Just like the first chimp in space, Chop Chop Chang himself, the restaurant wants to be innovative and exploratory.

Of the dishes I recently ate at Chop Chop Changâ€™s there were some highlights and some lows. Any dish that mentions the presence of fresh herbs is a keeper as these were used generously and boosted the flavour profile of the dish. The only plate we had without herbs was therefore noticeably heavier and darker than the others and not nearly as enjoyable.

Of the dishes that were enjoyed, my favourite was the Larb Isaan. Similar to San Choy Bow, Larb Isaan is minced pork that you wrap up with a cabbage leaf to pop into your mouth. Hot mint, dried chilli and pak chi farang (a Thai coriander) is mixed with the pork, adding some heat to the back of your mouth. I could easily have attacked this bowl with my spoon and eaten that pork mince up, but it was just as fun to eat it with my fingers. 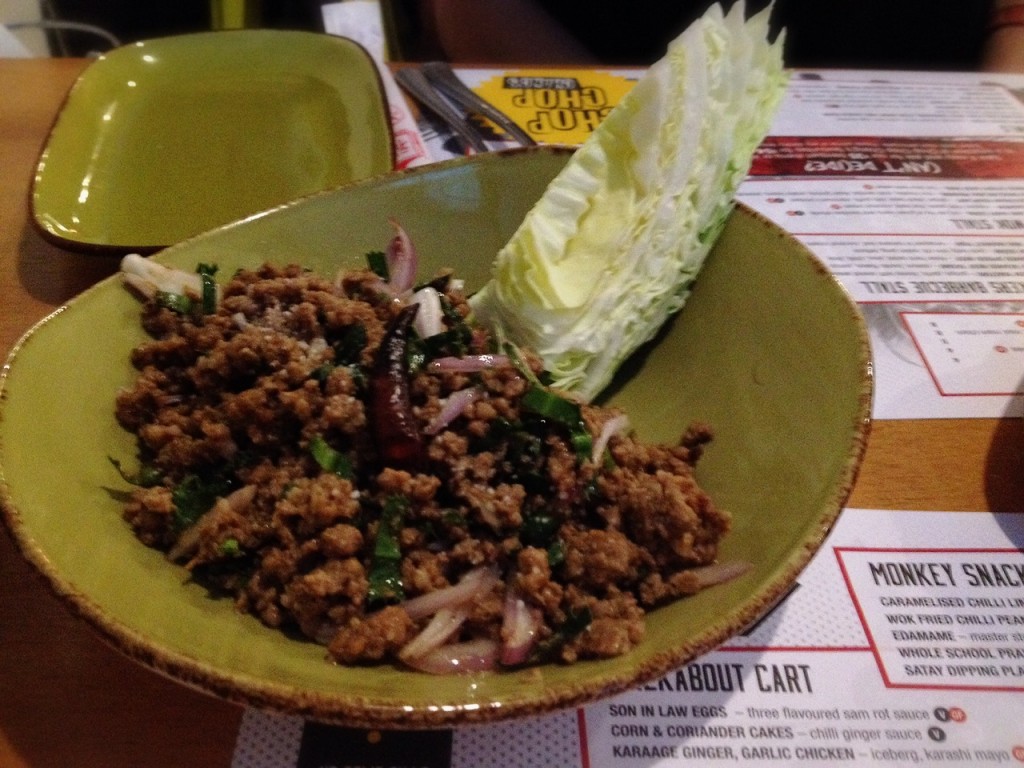 A simple entree that was also tasty were the crispy fried whole school prawns that had been rolled in five spice salt. Whilst tiny, these prawns still had fleshy middles that were juicy in their crispy, crackly shell. With a dipping bowl of nuoc mam cham, a Vietnamese dressing, that is a balance of salty, chilli and sweet, these prawns were finger licking good. 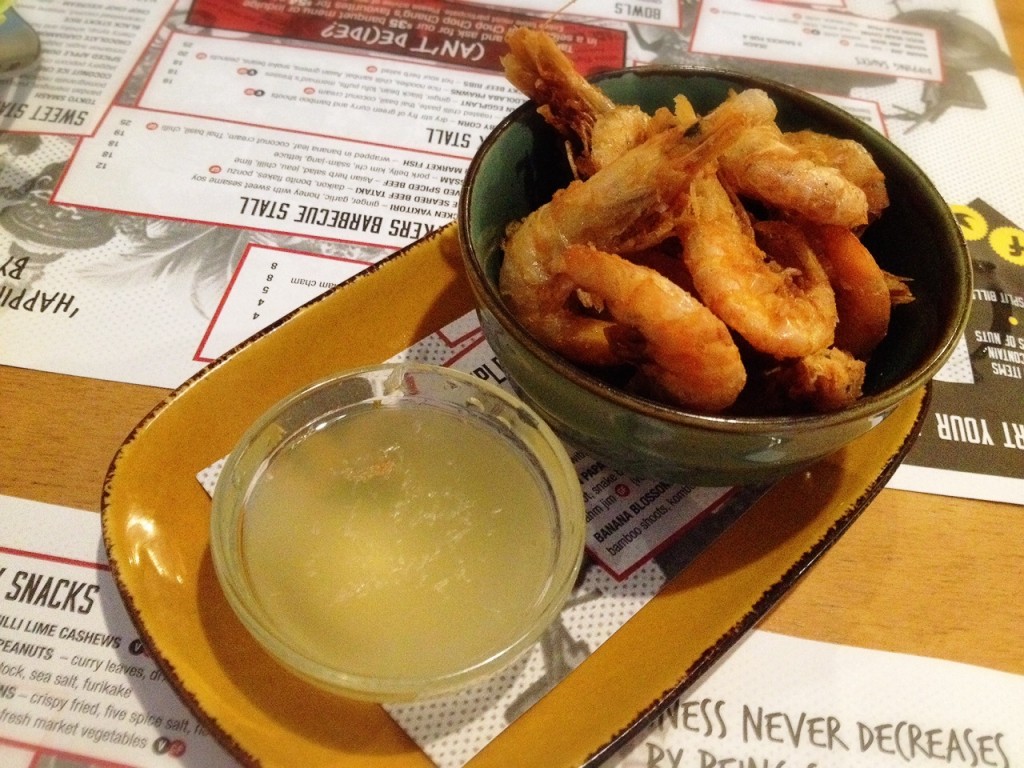 Another favourite was the caramelized pork with tamarind, star anise and cassia bark. This sticky, flavoursome pork was hidden under a nest of fried vermicelli noodles and a bounty of fresh mint and coriander with a dressing of nam jim. The pork was succulent in its bite size chunks and wrapped with some mint, was amazingly refreshing. 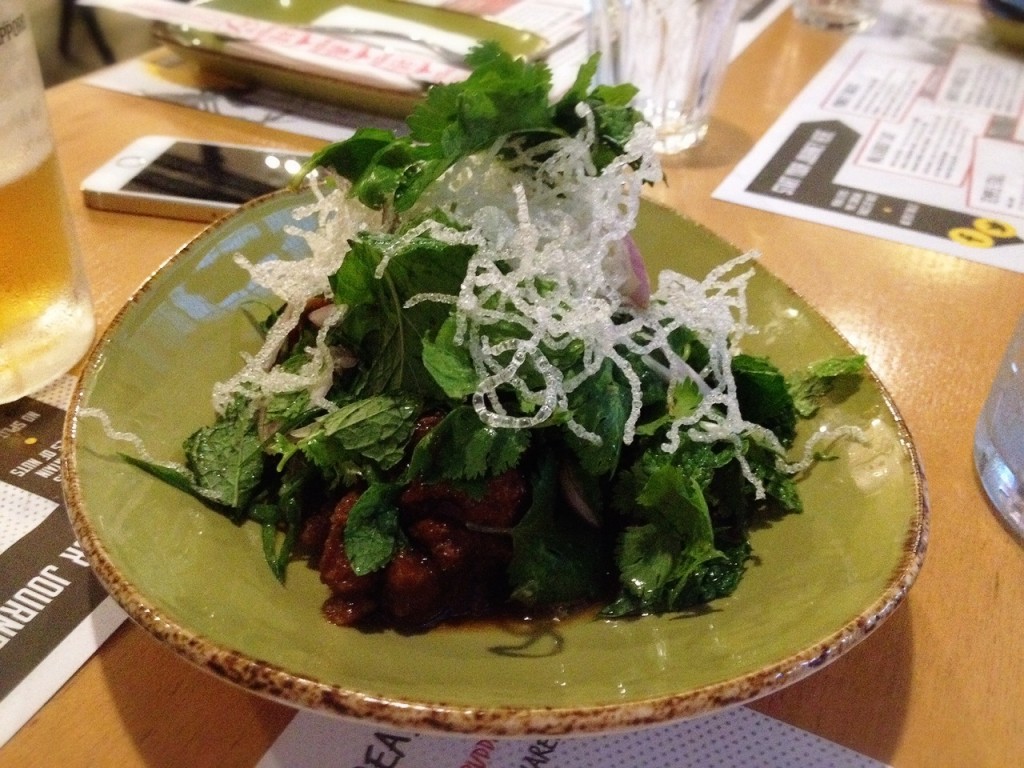 The only drawback to our night was the wok tossed Mooloolaba prawns with rice noodles and a tamarind sauce. This dish just was not as flavoursome as the others. The sauce was quite a dark brown and very earthy and there were nothing to spark up this dish. All it needed was a handful of coriander strewn across the top and it would have been lightened and delicious. The appearance of only four prawns in a dish thatâ€™s meant to be shared was also disappointing. 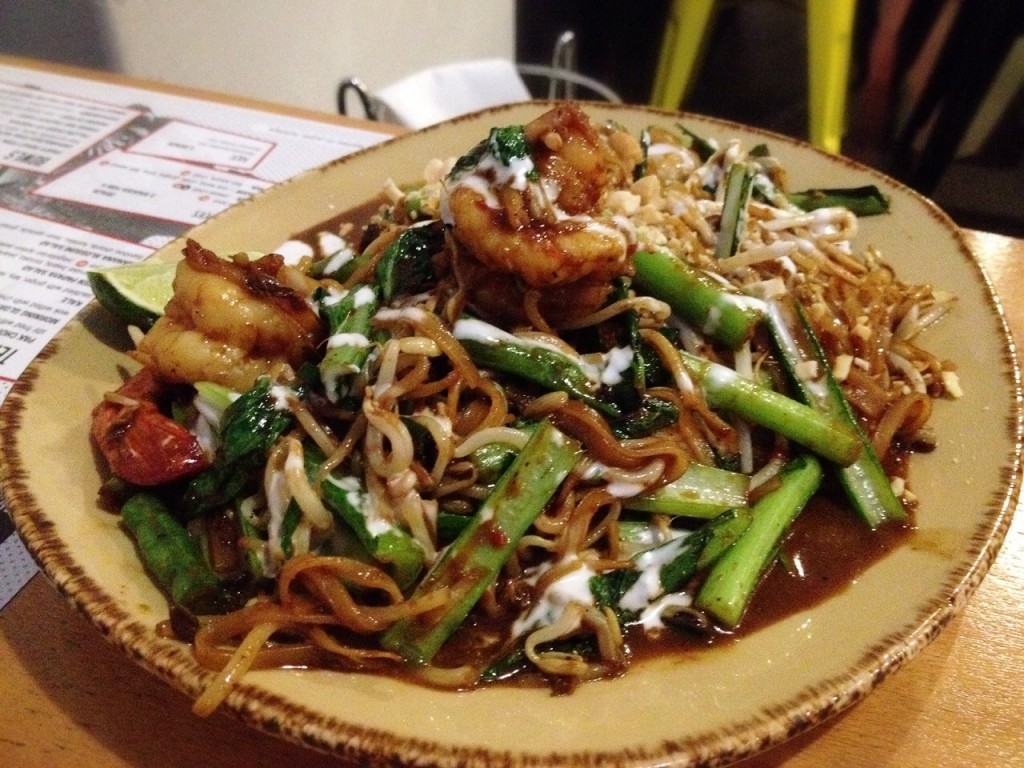 The positives, however, far outweighed this one dish and I would wholeheartedly recommend Chop Chop Changâ€™s as a dinner destination in West End. The service is friendly, the food is prepared quickly and the decor is funky. But, as before, steer mainly towards the dishes that mention herbs. You will not be disappointed.