CLEWS Give Us All The Feels

We caught up with Lily, who gave us a glimpse into the wonderful world of CLEWS, following the release of their shimmering new single ‘Feel’.

Sisters Lily and Grace Richardson have music in their blood. Originally from the small central coast town of Mollymook in NSW the pair relocated to Sydney a couple of years ago and have been busy building a rich catalogue of material ever since.

Last year saw CLEWS release several tracks including ‘Hollywood’ and ‘New Age’ delighting their loyal fans and earning them many new ones along the way.  They toured the country on their headline Spooky Pageant tour, then hit the road in the UK last November, before returning home to round out the year with a stack of festival sets.

CLEWS are back in 2020 with ‘Feel’. Essentially a break up song written to their hometown ‘Feel’ is powerful and heartfelt and, of course, comes with an equally stunning Maya Luana music video.

The Creative Issue: Congratulations on the release of ‘Feel’! What’s the story behind the song?

Lily: Thank you. I wrote ‘Feel’ when I was 17, at the end of year 11 in high school. It’s about knowing that you’re teetering on the edge of everything about to change. I was ready to finish school, move out of home and start a new adult life (which before you know it I am now living).

TCI: Your harmonies are legendary and a huge part of the CLEWS sound. As sisters, when did you first start singing together?

L: We grew up in a musical family, so we’ve been singing together for as long as we can remember. Our parents have a great ear for harmonies and that rubbed off on us pretty early. I don’t feel that confident when I have to play piano or guitar, but singing with Grace is the one thing where I feel like I duck to water. Then when we started the band a couple of years ago we knew the dual vocals were going to be a cornerstone of our sound.

TCI: Can you tell us a little about the CLEWS writing process? Do you have a method you’ve stuck with or does each song come about differently?

L: The writing process for CLEWS has been evolving as we go along. I’ve been writing songs since I was a teenager, and Grace is becoming more part of the process now. Usually I start with millions of notes on my phone as snippets of lyrics that I sew together into a song, and Grace writes the lead guitar parts and smooths out the melody. There’s not really a filter between us when we’re figuring out a new song. If we think it’s good we tell each other, if Grace thinks something is sub-par she will definitely tell me. 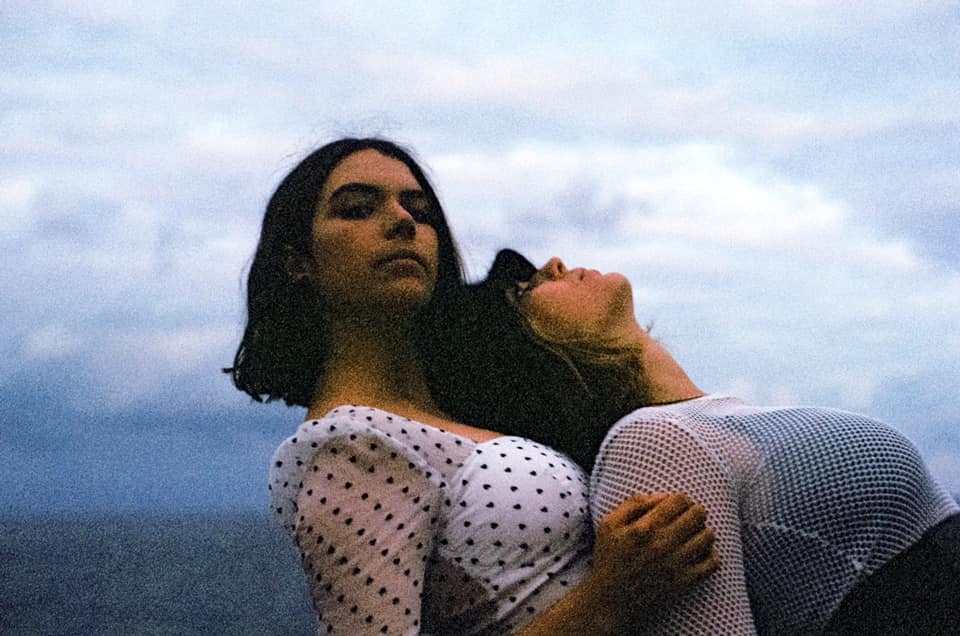 TCI: Needless to say ‘Feel’ sounds amazing. Where did you record it and who did you work with?

L: ‘Feel’ has existed in a few different iterations but we sort of recorded it the way we’ve been playing it in the live set, with the change in the outro and everything. We recorded it with the wonderful Adrian Breakspear who we’ve worked with a lot over the last couple of years. Our drummer Oscar and bass player Josh played on it too of course, as did a cellist and a violinist. Adding strings was the best part, like putting icing on the cake.

TCI: You’ve also released a music video for ‘Feel’. It was, as always, directed and shot by the very talented Maya Luana. How did this partnership begin?

L: Maya is my housemate and best friend, we actually went to primary school and high school together, and as you know she is a very talented filmmaker. She’s been on the scene since day one of CLEWS and is the mastermind behind all our visuals. We’ve always thought that photos and video clips are such an important part of building the world around the band and Maya knows us so well personally that she can capture exactly what we envision before we even know we’re thinking of it. We’re so lucky to be able to work with people we personally know and love and I wouldn’t have it any other way.

TCI: You mentioned upon its release that this video features you ‘running around your teenage haunts’. Was it shot in Mollymook? How did it feel being back?

L: We shot the video for ‘Feel’ in a couple of afternoons mainly in the fishing village of Ulladulla where we all went to high school. We just drove around town keeping an eye out for all the spots that look like old postcards. We wanted to capture the feeling of returning to somewhere that seems forever unchanged, while you yourself feel like you’ve changed so much. Shooting the video down the coast actually made me see the town in a new light, and reminded me how lucky we were to grow up somewhere so sweet and quiet. I love going back there now.

TCI: You’re touring with Boy & Bear soon and have your own headline shows coming up as well. What’s the best, and worst, thing about touring?

L: We’re really looking forward to the shows that are happening this year. Touring is mostly roses, and not many thorns actually! The best part is the hour or so of the show where all your energy is focused on nothing but the set, it’s almost meditative because you’re not worried about anything else. We’ve been lucky with the type of touring we get to do so it never really has a downfall, I guess being out of your routine and the late nights can run you down but that keeps you on your toes.

(Sadly at the time of publishing these shows have been postponed due to the COVID-19 crisis but stay tuned for rescheduled dates.)

TCI: Last year was an exciting year for CLEWS. What were some of the highlights?

L: We did our first UK tour at the end of last year which was literally a dream come true so that was a huge highlight. We had a particularly good night in Bristol, mind blown that people on the other side of the world were turning up to our shows!

TCI: What can we look forward to from CLEWS for the rest of 2020?

L: We’re hoping to put out a lot more music this year, with two special headline shows sprinkled in during June. 2020 has already been exceptionally strange for most people we know, so we’ll just be channelling everything into new songs and playing some great shows.

Shining On With Karen Allan

A Day In The Life: Alix Langley