Have you ever tried to juggle work and play?

Clowning Around is a comedic short film produced, written and directed by QUT film students, Brendan Mitchell and Tyra Gunnis.

The film follows, Harry Sloane, a workaholic who works for his family stationary company, Sloane Stationary.

Harry finds the monotony of his office life suffocating, and to escape begins moonlighting as a clown! 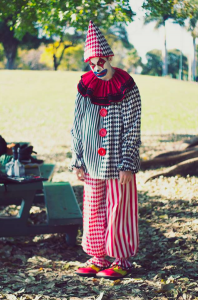 However his double life quickly catches up with him when his father (also his boss) decides to announce his retirement.

With new new expectations thrust upon him, just how long can Harry keep up his secret life of a clown?

What is the future of Sloane Stationary?

These are all problems Harry will face on his hilarious and chaotic adventure of juggling balls, laxatives and killer mattresses!

Join Harry on his journey to discovering that sometimes you just canâ€™t take life all that seriously.

Mitchell and Gunnis have been working on Clowning Around for almost a year and a half, the final product will be their graduation piece.

Both Mitchell and Gunnis hope the film inspires more people to do what they love.

At the moment Clowning Around is in its production stages, but the team have already put together an official trailer, which you can view here.

For more details you can go to the Clowning Around Facebook page or Indiegogo page.

Daniel Bennet and the Brisbane Illustrators

The Happy Cabin breaks into comedy