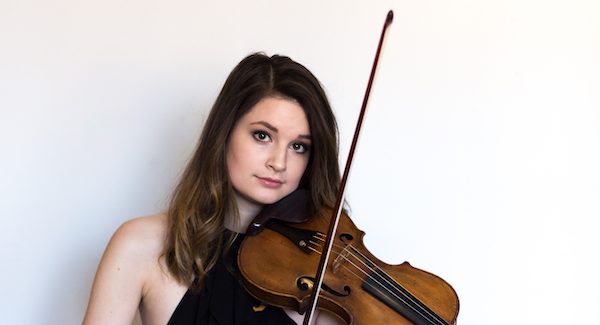 Courtenay Cleary’s recital with Alex Raineri at QPAC on Saturday afternoon was a dazzling showcase of two musical powerhouses of virtuosity.

Stepping into the QPAC foyer, I met friendly staff who checked my details, pumped out hand sanitiser and directed me upstairs. Inside the concert hall, we sat in a checkerboard, socially-distanced format on the stage (where the choir would normally sit). The balconies and stalls remained empty. This setting made us up close and personal with Courtenay and Alex.

The program opened with Arvo Pärt’s Fratures, a sublime set of variations on a six-bar theme, with an expansive piano chord progression, presenting the full colour platte of the violin through various techniques. Courtenay played the complex string crossings, rhythms and pizzicato seemingly with ease. Her left hand danced up and down the fingerboard. Her performance was powerful and subtle, with her vibrant tone filling the concert hall.

Next was Leoš Janáček’s Violin Sonata, which Courtenay performed online as part of her final Juilliard recital in May. It was broadcast across the Pacific to her professors in New York. On Saturday, she finally presented it to a live audience. The sonata shifted between four contrasting movements, Con moto, Ballada, Allegretto, and Adagio through a range of emotions. It opened with forceful, heavy bow-strokes in the violin part, before the piano came in with a rippling undercurrent. Alex played the lively, bold countermelody and didn’t hold back. Courtenay and her violin became one, moving with sensitivity.

To close, Courtenay and Alex paid tribute to Beethoven’s 250th anniversary with his Sonata for Violin & Piano No. 9, Op.47, Kreutzer. Courtenay told me in our interview that the first four bars of this sonata are some of the hardest ever written for violin, but she nailed it. Courtenay and Alex tackled the three fiendishly difficult movements, Adagio sostenuto — Presto, Andante con variaszioni, and Presto with a breath-taking display of mastery. Sitting there, listening in awe, my friend and I, both amateur violinists, thought #goals and we’d better start practising.

The small but appreciative audience clapped and clapped and Courtenay and Alex had to bow about six times. Standing ovations were banned due to COVID, but there was plenty of foot-stamping instead. So Alex and Courtenay returned for an encore, Romance by Amy Beach. Courtenay finished with a big flourish.

In all, it was a resilient, joyous return to the stage for QPAC, Courtenay Cleary and Alex Raineri. It was such a privilege to immerse myself in the atmosphere of live performance again and a great way to celebrate its return.

If you missed the concert, then don’t worry, because there’s still plenty to see in QPAC Unlocked! Showing from 28 August to 3 October, there’s classical, opera, cabaret, comedy, circus, theatre and more by Queensland’s leading artists. View the program here.

You’ve Got This: A Sit Down with Bec Brown