Rosie was in true from as she graced the stage of the Sit Down Comedy Club on a comfortable couch with a bottle of classy wine.

Her style was the same as that in her books, just an old friend sitting down in front of you sharing a self deprecating story that actually reveals intimate and fragile moments. Because that is how we deal with mental health. It’s a furtive comment to a friend to seek reassurance. A bewildered look of a colleague who didn’t actually want to know how you are going. Rosie shared in her show the complete inadequacy of the current mental health system in Australia. But she also shared how starting to blow dry her pubes was a revelation. And it’s this trademark mix of general hilarity and honest insights that dragged out all the women of Brisbane to Rosie’s back to back shows on a weekÂ night. 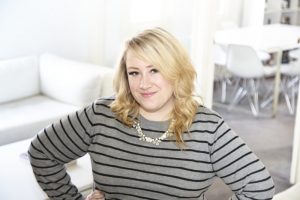 The audience was mostly women in their late twenties/early thirties and we were definitely at the right show. The few men in the audience had a bit to handle with Rosie dropping truth bombs. Yes guys, it’s true. Maybe if you put inÂ more effort into getting her off, she wouldn’t have a headache.Â And yes, if men only came one every ten times they had sex, the sex education program would have already been revolutionised.

The crap of a tumultuous childhood and mental health struggles have been the subject of her two books, interlaced with her comedic approach. In her show, Crazy Lady, Rosie held the audience captive for a windy, in-depth chit chat. Part girls night out and part at home in your jammies, Rosie’s show is worth making the effort to actually leave the house. Even when you’re reveling in your own filth having just binge watched three seasons on Netflix and your flatmates aren’t home for another day.