The Creases on the Release of Tremolow

One ofÂ The Creative Issue’s favouriteÂ local bands, The Creases,Â are releasing their debut albumÂ today.Â WeÂ sat down with Joe, Aimon and Gabe to discuss what it was like piecing TremolowÂ together.

The band took some time to release the album, but it was certainly worth the wait. Joe told us what made them choose toÂ hold back on the recording and release ofÂ Tremolow.

â€œI think we were just waiting for ourselves to be in a place where we were really comfortable with ourselves as musicians and as a band. I think you can take as long as you want to make your debut record, you only get one of those. So, we thought we might as well wait and try and do it as [well] as we can.â€ Joe told us.

The CreasesÂ spent a month in Melbourne sharing an AirBnB while they worked on the album.

â€œIt took forever, and also went really quickly at the same time. We were all very close together. Living in very tight space. Which was fine. It was really good to do it in Melbourne, away from our real lives here. No one could get distracted. Everyone could focus on what we were doing.â€ Aimon said.

â€œIt was intense, but really effective. It worked in the end.â€ Gabe added. 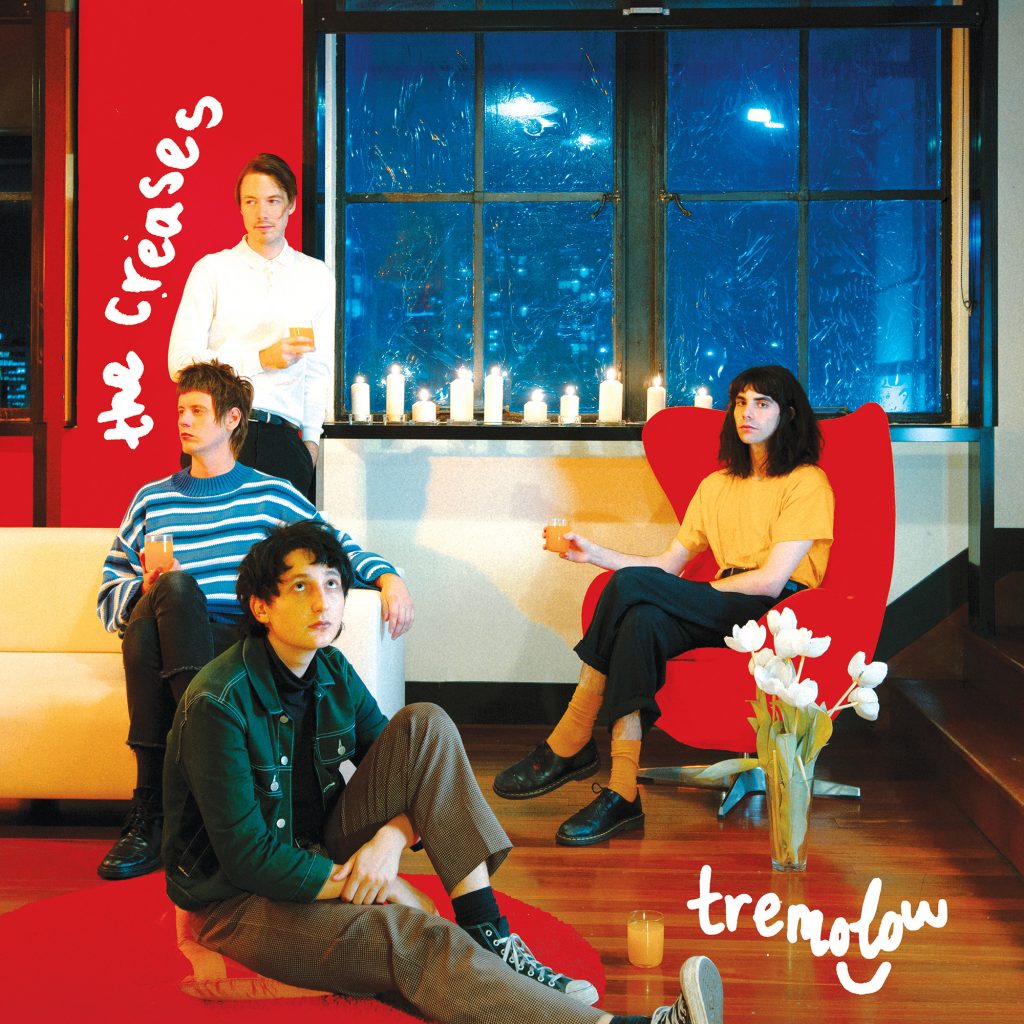 Part of the beauty ofÂ TremolowÂ is that it really showcasesÂ The Creases’Â talents when it comes to working a long list of inspirations into one cohesive sound. They told us a bit about the approach they took when writing and recording the album.

â€œAll the songs are kind of different. Thereâ€™s a few songs that came out of specific weekends away we had writing, and stuff like that. I guess most of the songs came from demos or ideas that Iâ€™d had and Iâ€™d bring to the band and weâ€™d expand on and finish together. Joe said.

“The two weeks leading up to recording, I think we met up every night and we’d play till about one, or something. Just for hours and hours, which was really good, because that meant when we got to theÂ recording studio, we kind of knew what we were doing.” Aimon said.

â€œThe goal was always to make something super layered, and had heaps of instruments and backing vocals. We wanted to do that at the startâ€¦ we werenâ€™t able to till now.” Joe said.

Starting next month, The Creases will be on the road with the Tremolow Album Tour. You can find all the details here. They let us in what they’re looking forward to the most ahead of the tour.

â€œWe really want to step it up, itâ€™s going to be really exciting to play songs that people have heard before. In the past, half our set has been unreleased material. Weâ€™re looking forward to really nailing these songs live too.â€ Aimon said.

â€œThereâ€™s such an immediate, obvious reaction when we play songs that people know, live.”

â€œThe main thing weâ€™re just excited is for everyone to know every song.â€ Joe said. 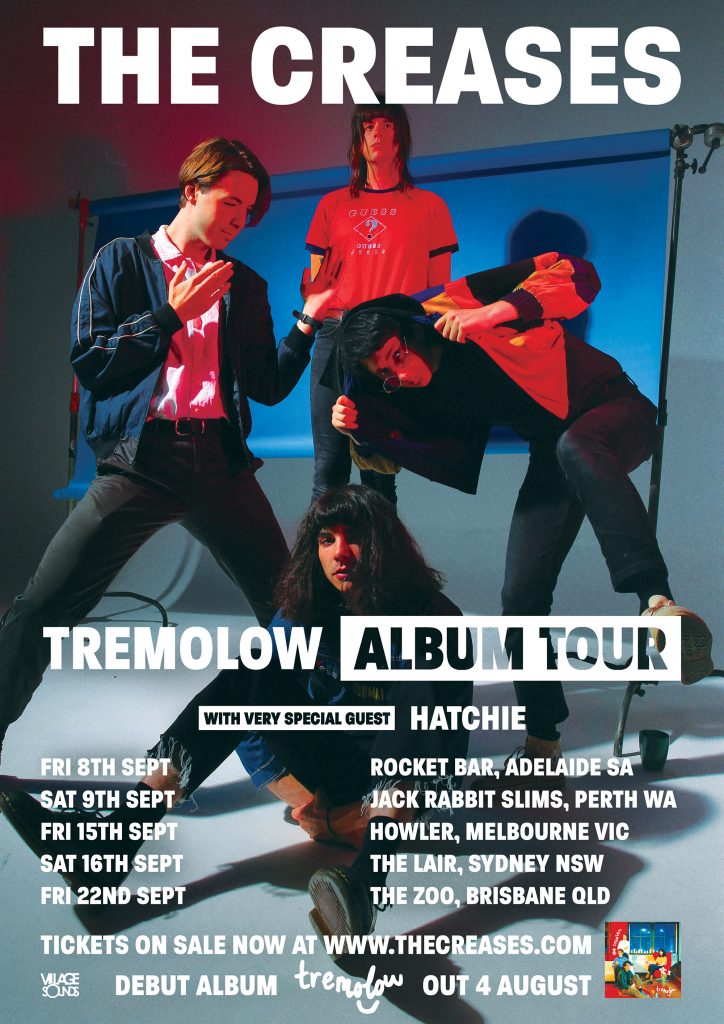 If you were one of the lucky attendees at Two Door Cinema Clubâ€™s Splendour in the Grass sideshows, you would have caught a support set by The Creases. They let us knowÂ what it was like Â supporting such a high profile band.

â€œIt was pretty awesome. They were pretty giant, great shows, very receptive crowds. It’s cool to play in like, a proper venue with lots of people.Â There was backstage etiquette, and all these different rooms and stuff…” Aimon said

“Yeah, a lot of ground wrestling, on the knees.” Gabe added.

Joe’s advice was to “just bottle it up and let it explode every now and then.” 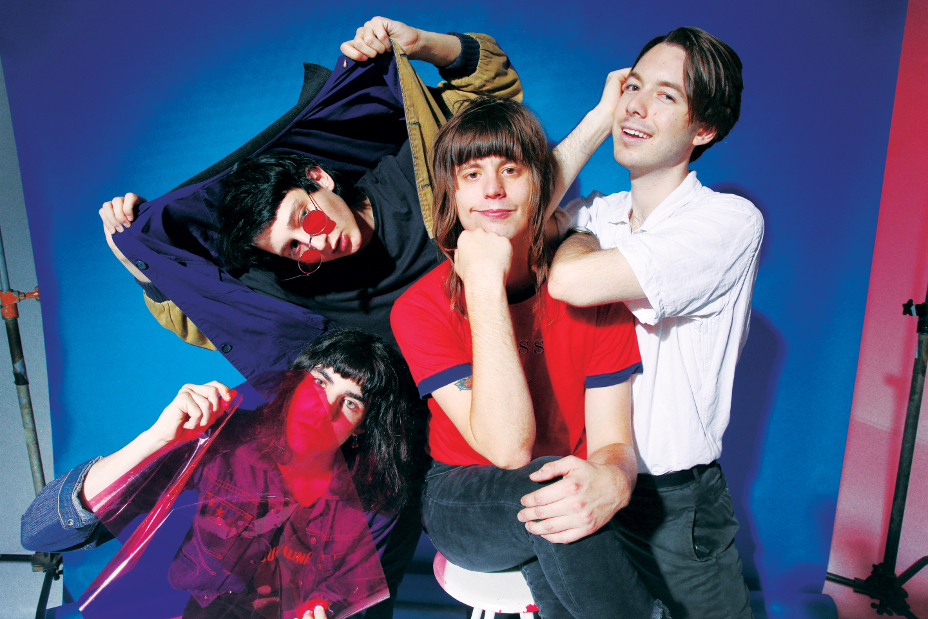 We wrapped up our talk by asking if there was anything the band wanted to let our lovely readers know, and here it is:

“Stay on drugs, if you like. It’s up to you. Live your best life!” Gabe added.

The CreasesÂ areÂ certainly stand up guys, and weâ€™re excited to say that their latest tracks are just as good as their sense of humour. As of today, you can get your hands on a copyÂ Tremolow, so be sure to check it out. To keep up to date with the band’sÂ latest news, go here.