If recent CV highlights were the key to shining a spotlight on our local creative success stories, Francesca de Valence would have a bagful to present- but itâ€™s not just the career achievements that caught our in eye in choosing to highlight this Brisbane singer-songwriter in our wintertime key features.

For those not familiar with Francesca de Valence, she grew up in Brisbane, the daughter of migrants from Mauritius, with music integral to her early family life. Francescaâ€™s interest in songwriting was born at primary school age, as she and her sister wrote their own musicals to entertainment the family. Â Following a rigorous musical education throughout high school, Francesca developed her talents as a violinist, pianist and singer. A car accident on her way to her own 16th Birthday Party lead to a period of enforced rest from physical activity gave way to exploration of song writing structures; transcribing jazz improvisations and contemporary choral works and even her family record collection to avoid any tedium of the enforced rest.

Leading on from her musical childhood,Â Francesca studied at the Queensland Conservatorium of Music during an era when the institution brought to life careers of significant female singer songwriters; Katie Noonan, Kate Miller-Heidke, Megan Washington, Emma Dean and Kristin Berardi- a collective group who have made waves across radio and internet streams around Australia.

Although de Valence often finds reviews making comparisons between herself and her Brisbane contemporaries, Francesca notes, â€œI donâ€™t think there is a (Brisbane) scene us such, that represents Katie, Kate or me. We are all individuals; we just happen to be from Brisbane, from the same generation. I live and work here, but I am still yet to work out the Brisbane scene!â€

Although a relatively conventional tertiary education in music followed, below the surface Francescaâ€™s urge to be a composer and songwriter bubbled away and nagged at her for the next 10 years or so as many a hotel lobby gig was given on most of the continents across the world. A back-up singing gig for Michael BublÃ© changed things- as an inspired Francesca gave BublÃ© a signed copy of her demo recording.

Since 2008 Francesca has been in full-time pursuit of her career as an original singer-songwriter and in doing so, says she is not only composing new music, but curating her own life. From winning LAâ€™s International Song Writing Award in 2008 for “My Somebody to Love”, further domestic song writing awards, to the release of three EPs and her first full album, Own Self, 2016 seems like a year of significant transition towards further critical acclaim and commercial success alike. 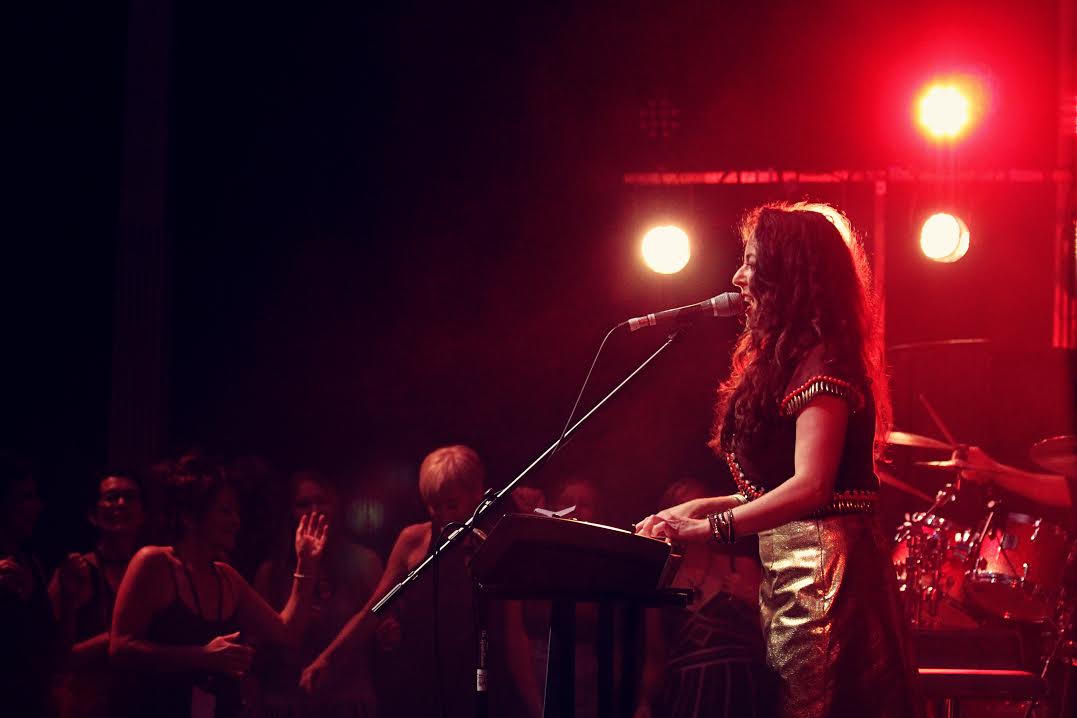 With contentÂ on Triple J Unearthed, Francescaâ€™s new music is now also on the national playlist for ABC radio and it is also getting regular attention from local commercial and community stations in Brisbane, like 96.5FM and 4ZZZ. Â If itâ€™s not her infectious music that keeps getting her invitations, then winning gongs like two prizes at the Brisbane City Council QUBE Effect Music Awards (including the major Peopleâ€™s Choice award), certainly have captured the mediaâ€™s attention.

Resisting the emotional drain of too much mass media helps Francesca to retain a balanced outlook, and giving back to community gives meaning to all of her work. “Own Self” appears to be a culmination of this achievement in life balance, and maximising her creative motivation. Interestingly, part of this process was finding discipline in writing regularly and being prepared to write and reject her own new work; knowing that by writing regularly, learning to be comfortable with songs that do not reflect her best work, the process of just â€˜doing itâ€™ and being objective after each new work, Francesca knew her craft was improving.

Constantly referring to a Neil Finn quote:Â â€œInspiration is what happens when you start working”, Francesca was motivated to introduce to the world her concept of a songwritersâ€™ club. Informally starteded on September 11, 2014 in response to a small group of songwriters who had “writer’s block”, the group officially named itself theÂ I Heart Songwriting ClubÂ on its one-year anniversary. The clubâ€™s purpose is to provide a supportive environment for songwriters to write songs weekly whilst being held accountable to the writing process by the same community of songwriters.Â In preparation for its secondÂ birthday, the club now has an online platform (iheartsongwritingclub.com), so its objective of being able to support songwritersÂ globally is closer to becoming a reality.

The other key ingredient to de Francesca’sÂ creation of “Own Self” was finding the right collaborators. At the centre of her team was the very significant support of producer Paul McKercher, a multiple ARIA winner. When asked why this was such an productive relationship, Francesca replied passionately- â€œI wanted to be open to trusting my producer without fear of me wanting to control the outcome. Paul has similar musical influences, although his are a bit more rocky if mine are jazzy, so I trusted him.â€

There were many other contributors including Nick Oâ€™Donnell, who opened de Valenceâ€™s album launch held at Brisbaneâ€™s Old Museum. McKercher couldnâ€™tÂ initially hear Francescaâ€™s angle for the production of the song “Yellow” on her guitar and voice demo, so Francesca spent some time in Garage Band, experimenting with a loop arrangement to fit the timing of her lyrics. With an additional string arrangement and further assistance from Oâ€™Donnell, in Francescaâ€™s words, “Yellow came alive”.Â 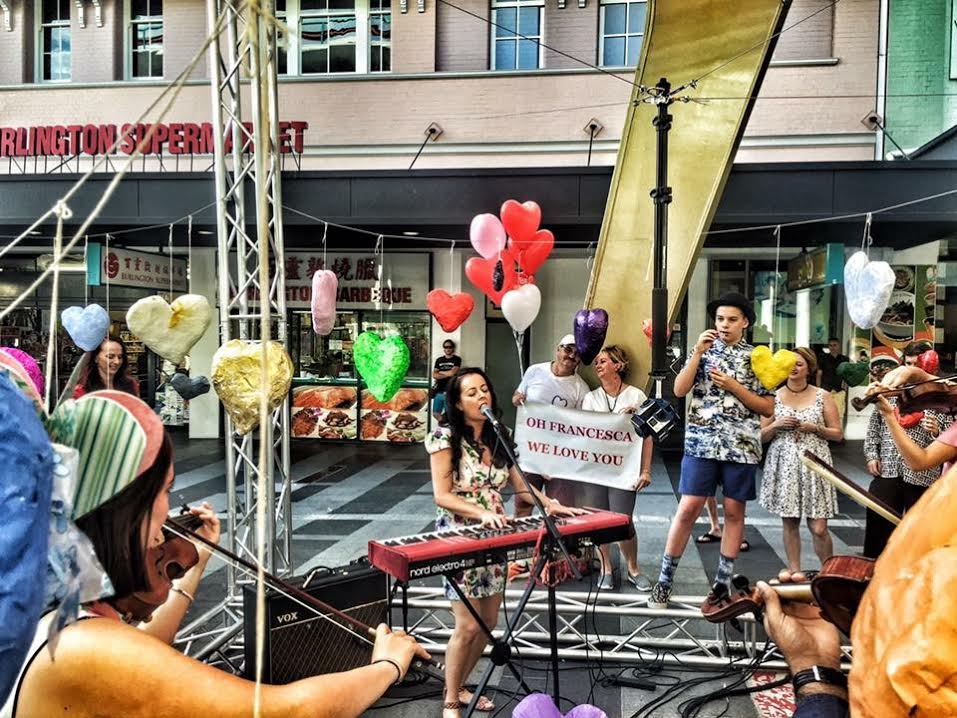 In terms of her own methodology, de Valence has been conventionally an old school songwriter; one instrument, her voice and a piece of paper. Francesca saysÂ â€œall good songs can be written and played on just one instrument.â€ As she explains her process for writing “Own Self”, most songs were conceived with only a soundscape in mind; only a couple of tracks needed a full band to realise the potential of their arrangements. The full arrangements of tracks on “Own Self” further reflect the respective creative playgrounds of de Valence and McKercher, particularly the string and horn arrangements. Francesca elaborated, saying that for her own contentment, her creative process has to be graceful and have natural flow. A number of trusted local musicians all participated in playing on the album and as Francesca said “they each brought their sounds and styles and all valuably contributed to the soundscape of “Own Self”.”

Moving forwards, Francesca is continuing to lecture at the Queensland Conservatorium of Music, as well as balancing the release of more music videos and more live performances in support of her album. She will also take the I Heart Songwriting Club to a new level as it celebrates its second Birthday.

A testament to her inspiration and creativity, Francesca was inspired by a dream in November 2015 to sit up in bed, grab her guitar and write the lyrics and melody to a new piece. No small piece, the World Choir Projectâ€™s full arrangement was written in January of this year and now it has places to go. For humanity and unity, teaching everybody how to sing is another big goal for this songwriter who is making marks on the world, all from our new world city, Brisbane.Â As Francesca says herself, â€œthe giving is getting back.â€

To keep up with Francesca de Valence, head toÂ FdVMusic.com

The Dawn Of A New Era for the Brisbane Arts Theatre