Cub Sport's Sam Netterfield on: making it big in Brisbane

Cub Sport’s Sam Netterfield shares his top five tips on surviving as a band in Brisbane.

Often missing out on big name artists it is clear Brisbane has neither the sparkle of Sydney nor underground vibe of Melbourne.

Never the less Brisbane continues to cultivate and pump out some rather big names on a regular basis.

From the Grates and Violent Soho to modern classics like Katie Miller-Heidke and Powder Finger. Brisbane’s ‘large country town status’ and interconnected musical community proves to be an excellent training ground for the wannabe muso.

â€œBrisbane is great because there are quite a lot of venues that get behind local bands. When we first started playing shows we played at places like Rics, Alhambra and Black Bear Lodge,â€ said Sam.

Knowing your audience and the owners can be a huge advantage. While youâ€™re out to gain an experience and have a brilliant show, you performance is also an essential part of any venues business model.

The bigger the crowd for you, the bigger the profits for them. Therefore the more of a crowed you draw in the more gigs youâ€™re likely to score.

So give those venues a business venture they just canâ€™t pass up by rallying your mates, brotherâ€™s girlfriend and her second cousins best friendâ€™s neighbours.

Though they may not be your ideal following, a solid base provides you with a solid reputation you can slowly and surely build upon. 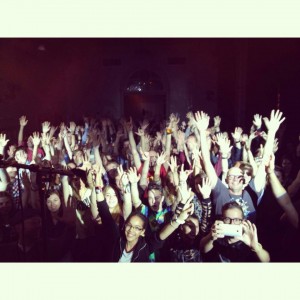 This is a town of creatives, so why not use it to your full advantage?

â€œCompared to some other larger cities, the whole music community is really tight-knit which makes the experience of being in a Brisbane based band really enjoyable,” said Sam.Â  This includes sharing tips, time and drumkits in this small community that is Brisbane.

Always be on the look out for that next opportunity to build a relationship with those around you and don’t just stop at other bands.

Producers, album artists and promoters are as much on the lookout for opportunity as you, a gig here and a shout out there can go a long way.

While it may feel great explaining just how unique youâ€™re newly carved genre is toÂ  the indie chick with the bad ass tattoo, one needs to question their perceived individuality.

If you have to explain why your sound is unique even after they have heard it, chances are it’s probably not.

HoweverÂ  “deepâ€ your lyrics are, if youâ€™re going to make it outside of your tumblr following one must have to make it a little broader in a place like Brisbane. Not at all discrediting its potential to embrace the new the issue is however, that there are far less people here to embrace it.

This problem is also a double edges sword, local bands running the risk of becoming too broad.

The term classic is only one bad set away from becoming generic.

Top Tip 4. Do use social media

Unless you have made it into the top 4 on Australian Idol (and let’s face it, who really watches that)Â  there are little public platforms where you can grab a nationwide audience who are willing to critique all you’ve got.

They say mans truest form is when he is hidden behind a mask, or at least… a key board. Casting your heart and soul into the public domain is a risk, placing yourself in the mercy of online trolls and worst of all, the Belibers is a tough choice.

If all else fails just try and try again. “I’d say just stick with it, don’t rush into anything and don’t be discouraged if things don’t happen overnight,” said Sam.

“There’s always room for improvement and growth in music so I don’t think there’s really a preset benchmark for total success. When we released our debut single, ‘Evie’ at the end of 2011 – we were really lucky to have it picked up and supported so much by Triple J and community radio.”