The new generation is here to reveal a collection of artwork you’ll not want to miss.

TCI recently spoke to Sarah Hazlehurst, the brains behind the opening of The Culprit Club to ask a few questions about the opening of this gallery in Fortitude Valley.

TCI: Describe the art space that you are aiming to create with TCC?Â

SH: Itâ€™s a little pocket-sized gallery/retail space. Weâ€™re super lucky to be located in Fortitude Valleyâ€™s little art hub, Winn Lane. With plenty of outdoor space, and a super supportive network of creatives in the area â€“ we plan to use our inner and outer exterior to exhibit and excite.

TCI: You say thatÂ The Culprit ClubÂ was bornÂ from creative frustration. What particularly frustrated you about the creative industry?

Sarah Hazlehurst: To be honest, itâ€™s a pretty multifaceted reason stemming from personal frustration with individuals in the industry, who bring others down to build themselves up, as well as a generalised frustration with governing authorities spending more time criminalising art forms then they do supporting them.

TCI: Why do you think Brisbane needs something likeÂ The Culprit Club?Â (TCC)Â

SH: Our motive is motivation.Â We aim to exhibit the best and the worst from Australia’s creative counterparts. The art we advertise needs no restriction or regulation. Our intention is to create and collaborate, accept and expand, educate and inform to provide the Brisbane community with the creative culture it’s yearning for.Â Artists need opportunity and support, and thatâ€™s exactly what the space is about providing.

TCI:Â What sort of artwork are you going to be showing? Will everything work accordingly to each other or will there be singular artists featured in their own exhibitions?Â

SH: Thereâ€™s not specifically one type of artwork that will be on display. There will be solo shows, and group shows. From surrealism to street art, weâ€™re keen to have it all! The group shows will be themed. Artists are encouraged to creative their own style of artwork in any way they wish to express the theme. This is what weâ€™re doing with the first exhibition, Opposing Offenders which has 18 artists from around the nation all creating different works, and different ideas to represent the theme. 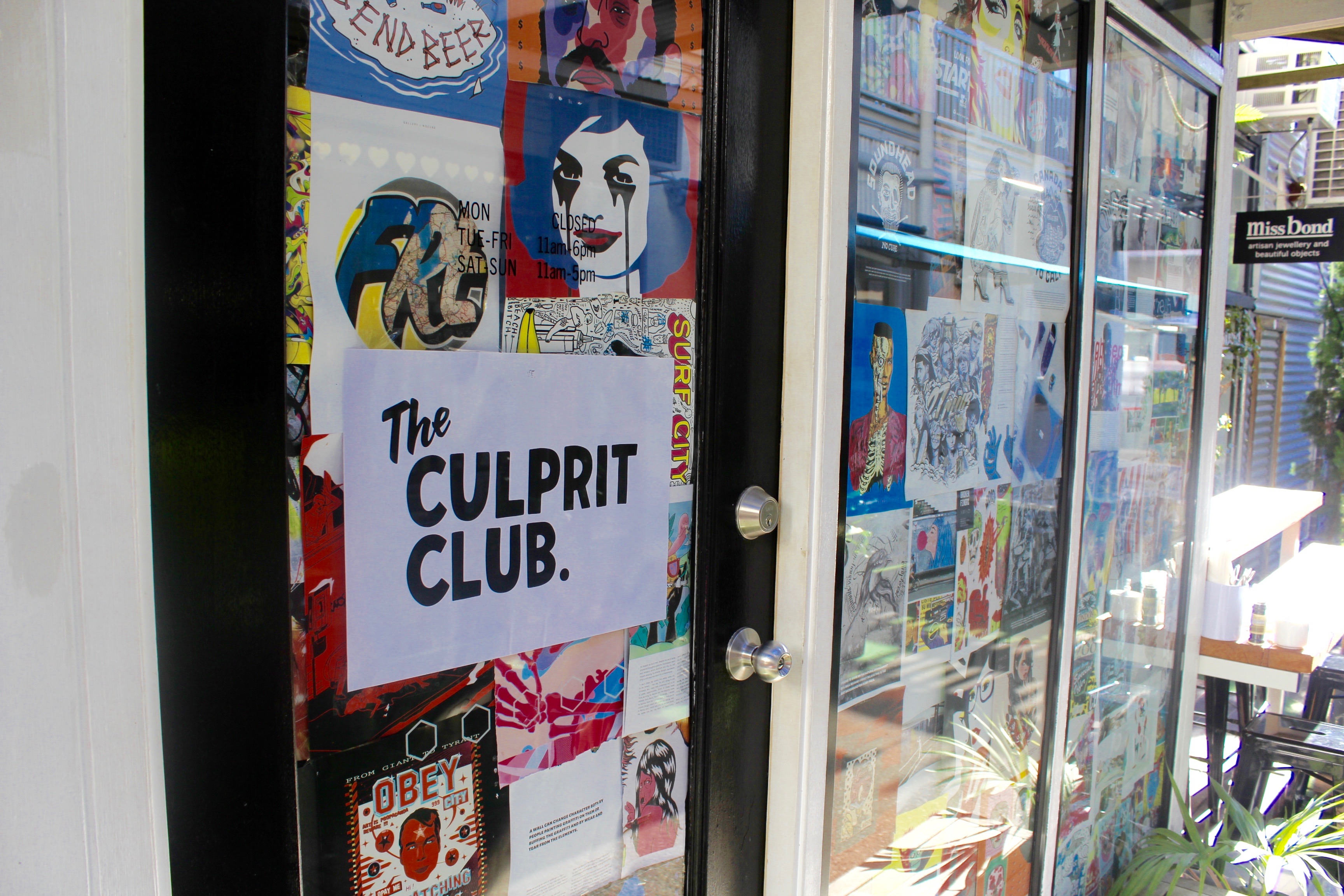 TCI: Will you collaborate with only locals or others fromÂ Sydney and Melbourne?Â

SH: No, itâ€™s not local only. The first show also features a number of interstate artists from both Sydney and Melbourne, however we do have a local focus and aim to support/showcase as many Brisbane artists as possible.

TCI: How many artists will you show in the space at any one time? Is there a limit?Â

SH: Iâ€™m really pushing to make the space limitless. Itâ€™s not going to be bound by sizes or restrictions. Despite being tiny, the gallery will feature as many artists as possible, in many different ways! The first show alone has 18 artists, thatâ€™s just a little teaser into what weâ€™re about. Youâ€™ll have to come in and visit to find out more!

TCI: Tell us more about the launch. When, where, why?Â Â

Why: Because weâ€™ve got something big to say, and wannaâ€™ start this thing with a bang! The Culprit Clubâ€™s first exhibition Opposing Offenders â€“ Crimes Against Humanity will challenge the ideas of the outspoken majority. The showcase will react to the traditional projections of â€˜crimes in societyâ€™ and respond to the demoralising acts of â€˜Crimes Against Humanityâ€™.

TCI: What is the main demographic that you are targeting with this gallery?Â Â

Creative and open individuals. The Culprit Club is not restricted to any particular demographic.

TCI: What is your favouriteÂ art style?Â

SH: Personally itâ€™s graffiti. I love everything about it and have since I was very young. I like it when itâ€™s messy and clean, authorised and illegal. I love empty buildings, and hefty hand styles and splashes of colour that brighten up the most boring of places. I like that people have something to say, and can say it loudly without ever being seen, or actually saying a word. A lot of people donâ€™t see any purpose or place for graffiti, but theyâ€™re really just not looking hard enough. Our city is a beautiful place, and that beauty is inclusive of many different artforms.

TCI: How do people go about getting TCC to display theirÂ work?Â

SH: Just walk in and say hello! The gallery/store is open Wednesday â€“ Sunday. If youâ€™ve got a proposal, idea or art show in mind thereâ€™s a good chance weâ€™re keen to talk to you about it. Then thereâ€™s email, IG, FB and all the other excellent technologies that dictate the way we communicate these days. Donâ€™t be shy, get in touch! 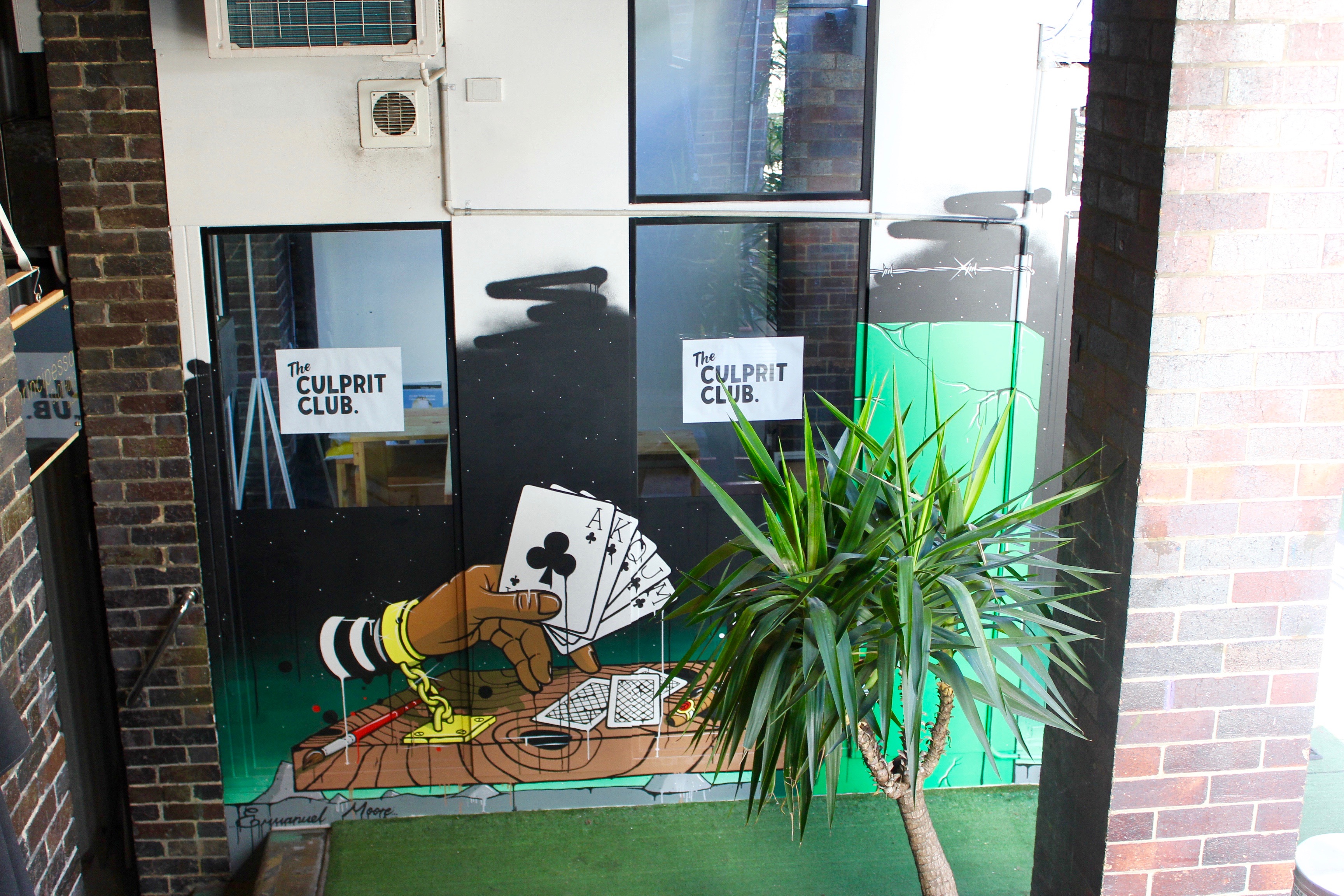 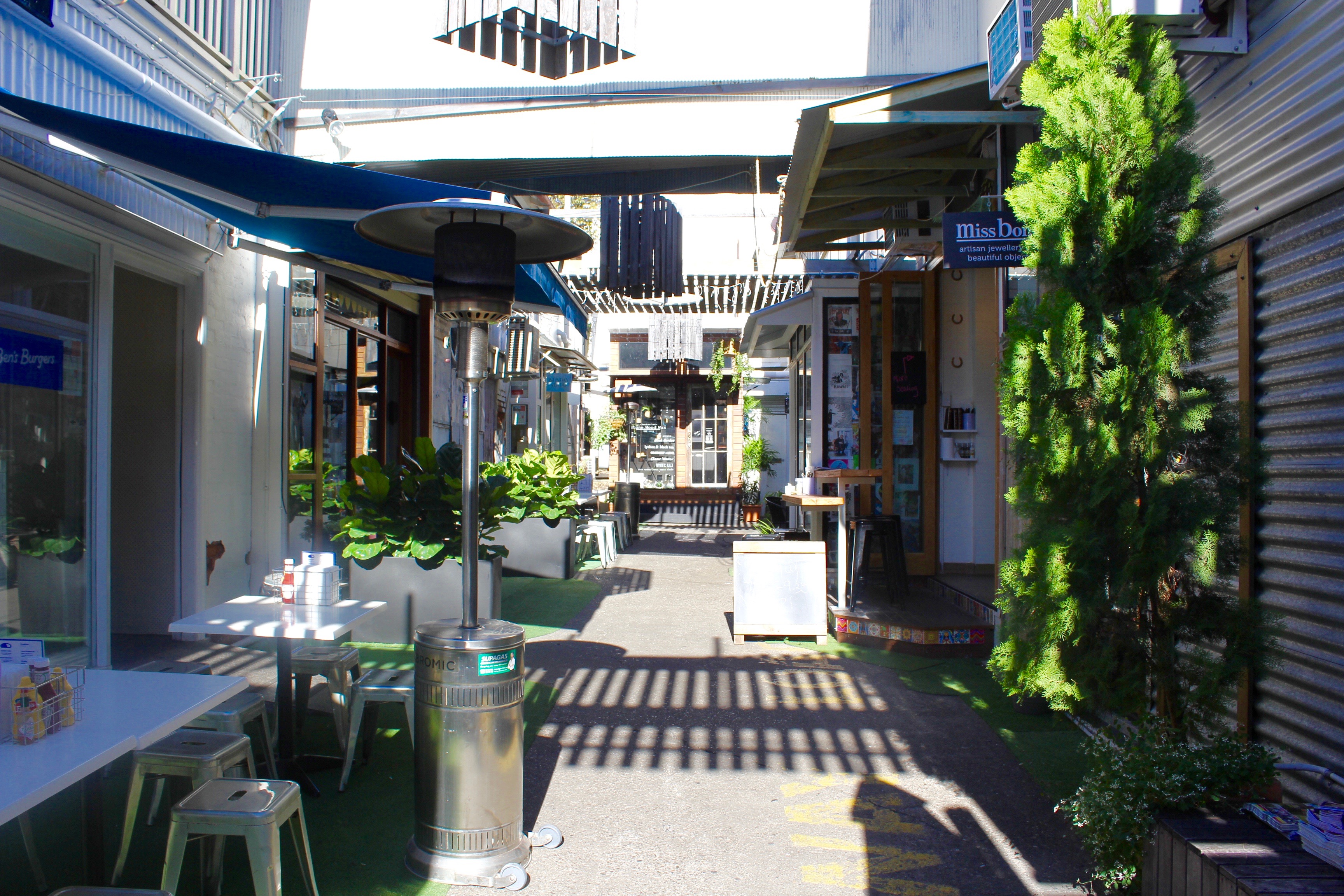 TCI: Do you believe that the City Council or theÂ Government do enough for small businesses wanting to help the creative industries?Â

SH: I could write a very, very long winded, whingy answer in response to this, but instead I will just say no, I donâ€™t believe the City Council and Government do enough for small businesses, ESPECIALLY not in the creative industries. The Culprit Club is currently not supported in any way by the council grants or funding. I once looked into it once, but after enquiring and being told my application would not be considered because there was â€˜one profanityâ€™ mentioned on the website, I thought fuck it – even if they did give me money, Iâ€™m not going to accept it under the duress of censorship.

TCI: What is the TCC history? How did this idea come to be?Â

SH: The Culprit Club is just baby; our history has not been written yet. J

â€˜Culpritâ€™ is often understood as a person guilty for a crimeâ€¦ a villain, a cheat, an offender. Itâ€™s always got this bad stigma aligned to it, and I just think itâ€™s ironic that some of the best people I know have this â€˜bad stigmaâ€™ attached to them, when really the only thing theyâ€™re guilty of is greatness. From this idea, The Culprit Club came to be. The club part of the name represents the unity and collaboration, that we will ban together as good people, and bad people or whatever type of people we chose to be â€¦. because itâ€™s not always â€˜what you doâ€™ that defines who you are.

TCI: Did you study before this or just jumped straight into opening an Art gallery and store?Â

SH: I studied Journalism at Griffith and language and writing abroad at Cambridge in the UK. Eventually after studying and working a bunch of shitty jobs I realised that all I really wanted to write about was art and graffiti, which obviously restricted me from a lot of job prospects.

I started a graffiti magazine with one of the best people Iâ€™ve ever met â€¦ and one of the worst. The good and bad experiences of that really shaped me, and pushed me to start something positive, something bigger and better.

When I started working for No Cure Magazine, I found direction. Working with my amazing editor, Mark Zeidler and having the autonomy to actually write and publish stories about things that actually mattered gave me a lot of drive! I remember being proud as punch when he printed my â€˜fuck the policeâ€™ story. Iâ€™m so excited for No Cure Magazine and The Culprit Club to continue in creative collaboration. So many big things are around the corner!

TCI: What do you see in the future for TCC?Â

What: The Culprit Club Launch Party and Art Show

Pack your bags: Five boutiques to have you Spendour-ready