Six dancers intertwine their limbs in a pulsing clump of bodies.Â A mesmerisedÂ audience watches with breathless fascination, attempting to dissect the contemporary movement and throw theirÂ own interpretations of the pieceÂ into the mix.

As the dancers thrust their weightÂ onto their shoulders andÂ extend flexed feet, it becomes apparent they might reflect plants swaying in the breeze, or roots twistingÂ beneath soil.Â This is one moment in Mozart Airborne.

A captivating collaboration between Opera QLD and Expressions Dance Company (EDC) sees six opera singers share the stage with an ensemble of six dancers to perform new contemporary works from renowned Australian choreographers. Exploring arias from Mozart’s most cherished operas, from Don Giovanni toÂ CosÃ¬ fan tutte,Â the show defies genre in a multi-artform discussion of the fundamental elements of the human condition.

An exposed-brick studio on the third floor of the Judith Wright Centre of Contemporary Arts came alive with grace and energy as the dancers showcased three pieces from the production to an intimate audience.Â Beforehand, The Creative Issue were fortunate enough to have a chat with EDCâ€™s Artistic Director, Natalie Weir, and talented EDC dancer and choreographer, Elise May.

The Creative Issue:Â First of all, what was the initial inspiration for Mozart Airborne?

Natalie Weir:Â It really came about through the Artistic Director of Opera QLD, Lindy Hume, who Iâ€™ve worked with before. We were having coffee one day and talking about what we could do together with the big company working with the small company, and we just came up with this idea. The most important thing was where the dance and the music, or the singing, were on equal balance, rather than it being a big opera with the dancers only in a little bit, so finding the equality between the two. Lindy said, â€œMozart; Iâ€™d really love to do something with Mozart music, people would really love that.â€ And, it kind of just grew from there. 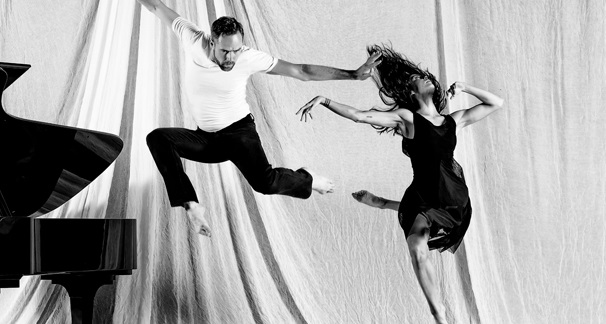 TCI:Â Mozartâ€™s operas reveal that he had a keen interest in the human conditionâ€¦ Would you say that element of humanity is explored through your show?

NW: Yes, I think the show feels very human and very beautiful. I think his music is so exquisite in that way and what you see on stage is what looks like a bunch of ordinary people off the street, but theyâ€™re doing such extraordinary things. Thatâ€™s the beauty of it. Itâ€™s almost like, it could be an everyday person, but of course itâ€™s not, theyâ€™re highly trained artists. I think it does speak of humanity.

TCI: Are there any specific moments that highlight important themes?

NW: We wanted to work with six different choreographers, so we had quite an eclectic mix of styles and genres, and what we did with them was we gave them an outline, but we didnâ€™t try and tell them what the themes were. They were very very open to create work that expressed what the music said to them. So, some of the works work against the music, almost, and some of the others go in with the emotion of the music. Each little section is quite different, and then itâ€™s our job next week when we have all the singers and all the dancers and all the directors to bring it into one solid work. Does that sort of answer your question?

TCI: Yeah, it does. So the choreographers are given a lot of artistic freedom to choose their own themes?

NW: Yeah, we thought it was important that they were inspired by their music to create what they wanted to create. I think whatâ€™s become apparent is that there are a whole lot of ideas and motifs that have come through in all the different pieces. It will be quite nice to see that once itâ€™s all run together.

TCI: How is the show relevant to an Australian audience specifically?

TCI: All of Mozartâ€™s themes are quite universal as well.

NW: I think thatâ€™s more what we were looking for, that he has that universal appeal that has to do with humanity. 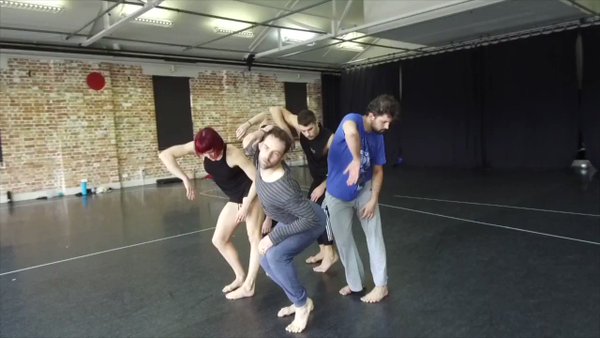 TCI: Elise, could you tell usÂ a little bit about your role in the show?

Elise May: Iâ€™m one of the dancers in the ensemble, and basically weâ€™ve had some choreographers allocated to different arias. Iâ€™m one of the choreographers as well, and thereâ€™s another dancer whoâ€™s a choreographer, so two of us are wearing both hats for the program. The show is curated by Lindy Hume, the director of Opera QLD, and Natalie Weir, our director, and so theyâ€™re trying to shape together a program that highlights the strengths of both opera singers and the dancers. Theyâ€™ve allocated different Mozart arias for different choreographers. Altogether there are 11 arias, so quite a lot of short works, but the role of Lindy and Natalie is to shape them together into a program that has a through-line and has a sense of unity, and yeah, I suppose a journey to follow from beginning to end.

TCI: With so many different choreographers, is it hard to find unity in style?

EM: I think so, I mean everyone seems to have such a unique way of working, and that comes through in the final product. So, thereâ€™s certainly that diversity in whatâ€™s come out of the project. I think the unifying elements are the language of contemporary dance and the language of opera, and Mozart being the overarching umbrella themeâ€¦ It sort of somehow all feels under that synergy or symbiosis. But yes, within that there are moments of highlight and darkness and shade and everything in between, and so I think having so many different choreographers contribute to that has made it more dynamic, and thereâ€™s more range within that.

TCI: Can you bring your own interpretations of the arias into your choreography?

EM: Yeah, I suppose that rather than each choreographer taking the literal meaning of the opera or the aria and taking those words and creating dance about those specific things, I think each choreographer has taken their inspiration from the opera in various ways and explored themes, and sometimes the quality of the sound, and I think quite naturally ideas have emerged from just being exposed to this art-form. So yeah, I can definitely read into the works some really strong themes that are really clear and almost tell little micro-narratives. Thereâ€™ll be some more abstract moments, which are more about seeing two art-forms come together and meet each other. Yeah, I think thereâ€™s definitely things the audience will be able to read and follow through the show.

TCI: How important is it as a dancer to push these themes youâ€™re talking about across to the audience?

EM: I believe that dance has a really strong power to communicate ideas. I canâ€™t help but feel an emotional connection with movement and with sound, so I think those ideas naturally come out and have come out in this process, so thatâ€™s really nice. I think itâ€™s important to have this sense of communication, but as to whether itâ€™s a specific idea, I think with a lot of contemporary art the audience member can make their ownâ€¦

EM: Yeah, their own judgements, or they can almost read their own- according to their experiences and their backgrounds- they can meet the performance halfway and come up with their own imaginativeâ€¦ let their imagination be carried away.

TCI: Is collaborating with Opera QLD a new kind of experience for you entirely?

EM: Yeah. Iâ€™ve not worked with an opera company before. A couple of years ago we were introduced to Opera QLD and we became part of an ensemble for one of their performances. That was like, our first introduction. Itâ€™s like a whole other world of beauty and poetry and art, so I feel really privileged to be doing something quite different to the work we would normally do at Expressions.

TCI: Itâ€™s such a unique performance, especially for Australia. I donâ€™t think weâ€™ve ever had anything similar.

EM: No, we havenâ€™t! I was thinking, quite recently, itâ€™s a wonder we donâ€™t see more of this, because itâ€™s working so well for us in this project and coming together so beautifully, itâ€™s like â€˜aahâ€™ why hasnâ€™t this been thought of before? But yeah, I think itâ€™s quite a new idea and I feel very lucky to be part of it.

TCI: Would you prefer working as a dancer or choreographer?

EM: Thatâ€™s a really interesting question. I really do enjoy performance. Thereâ€™s an incredible sense of personal satisfaction in being able to express yourself with your body and communicate to the audience, as we spoke about before. I feel like choreography is a really interesting form to me and Iâ€™m keen more and more, particularly as I get older as a dancer, to investigate choreography, because it feels to me like a natural progression coming from a performance career and moving into choreography. Thereâ€™s really something powerful about the form of dance and being able to connect ideas and movement together, it really excites me, so I would love to do more choreography in the future.

TCI: Do you have any choreographers that really inspire you?

EM: Yeah, so many. Thereâ€™s been so many big choreographers over the last century who have really influenced contemporary dance to how it is today. Yeah, I could list a whole lot of names if you really want! Iâ€™ve always been really inspired byâ€¦ I suppose sheâ€™s the founder of dance and theatre, and her nameâ€™s Pina Bausch. So, the works of Pina Bausch andâ€¦ look, who else? Recently, we had a workshop with the visiting Royal Ballet from England and I was really inspired by the work of Wayne McGregor. Heâ€™s fantastic, and I love Ohad Naharin, the director of Batsheva Dance Company. Thereâ€™s a lot of big choreographers in Europe, and probably one of my favourite choreographers to work for is Natalie Weir. I think itâ€™s important to be inspired by other choreographers.

TCI: If you had to give a piece of advice to a young performer, what would it be?

EM: Dancing means different things to different people, and the pleasure of seeing a dancer perform who has fully invested their development in becoming uniqueâ€¦ The dancers that Iâ€™m drawn to in performance are those who are really unique and who have developed a style that tells me about themselves. So, I would encourage a sense of self-discovery and investigating what makes them unique as a person and how to express that through their body. I think training can be quite often heavily balletic or technical based, and sometimes you feel like you need to conform to that look, of what a ballet dancer should look like or what a contemporary dancer should look like, but I feel like itâ€™s that unique quality and that special individualityâ€¦ If I could have been told one thing when I was younger when I was training, it would be like, investigate what makes you you, and what makes you unique.

TCI: As in, itâ€™s OK to step outside of the technique and add your own flavour to a movement?

EM: Yeah, yep. Technique is one thing, but to be able to have that freedom to communicate and express who you are and how you move differently, that will always stay in my mind much longer than anything technical.

What: â€˜Mozart Airborneâ€™ by Opera Qld and Expressions Dance Company