David Hinchliffe's "Reflections": Art for a Good Cause 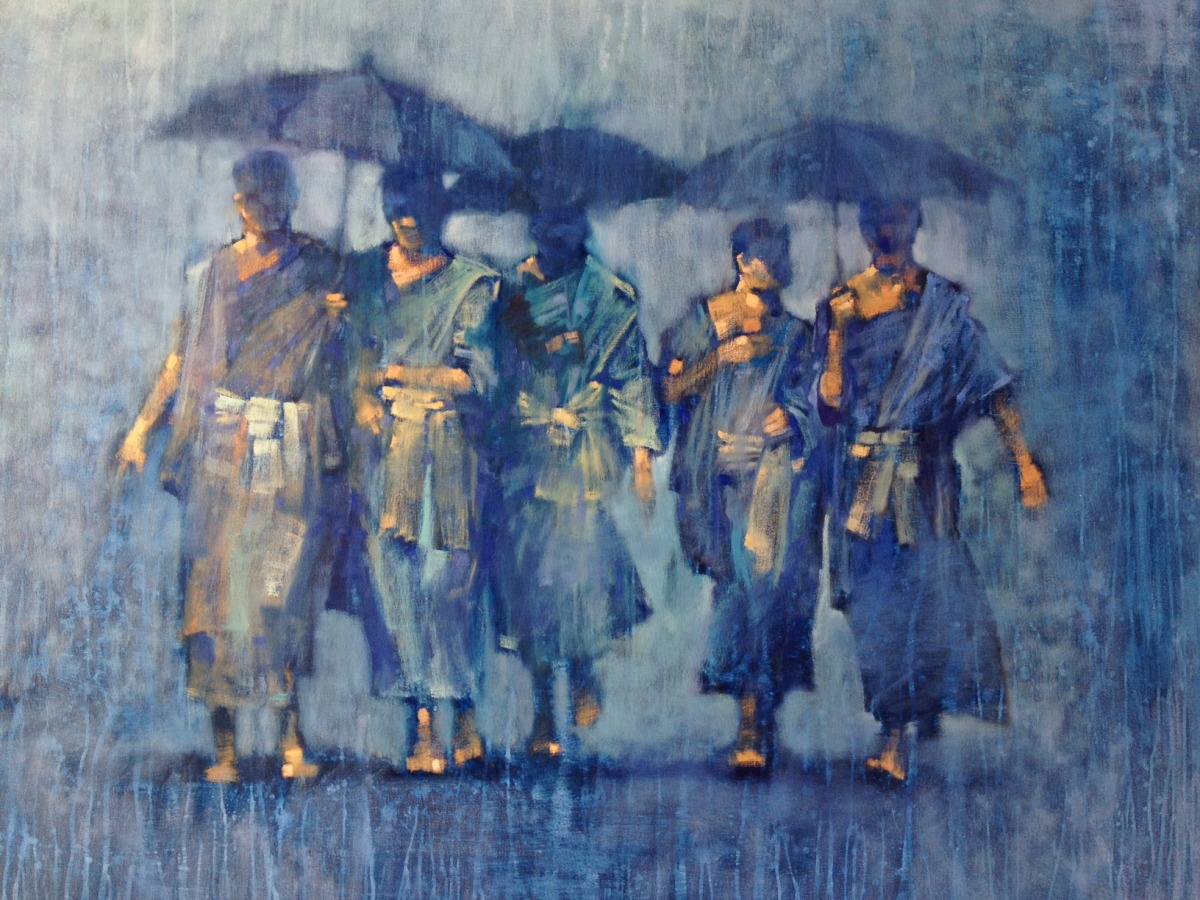 You’d recognize David Hinchliffe‘s art: it’s big, blurred and beautiful. And if, for some reason, you don’t – then maybe you recall him from his time as Deputy Mayor of Brisbane some years back.

Since he abandoned politics (who wouldn’t?), he’s been a busy man. Or Â rather, an occupied artist. If you’ve any interest at all in art, then Hinchliffe’s streetscapes and iconic landmark paintings (see Google images) are truly something to behold.

Just recently though it’s his passion for painting monks that has been in the spotlight.

On July 27, the Chung Tian Temple, located just south of Brisbane in Priestdale, officially opened the doors to its brand-new art gallery, filled with the Buddhism-inspired works of none other than Hinchliffe.

The best thing about the launch wasn’t simply that another art gallery had opened – in this regard, an especially peaceful one – but rather that the Royal Brisbane and Women’s Hospital would also benefit.

Indeed, Hinchliffe’s 35 paintings and ceramics on display in the gallery are all for sale while on display till October 30. Together, they are valued at over $100,000 – and much of the proceeds (35%, to be specific) will go towards medical research and patient care at Queensland’s largest and busiest hospital. An additional 35% will go to the temple.

On speaking with the RBWH Business and Relationship Development Manager Rachell Buckley, Creative Drinks found out how the whole idea was initiated and why it worked out so well.

“This all came about after David and I â€˜connectedâ€™ on LinkedIn â€“ the power of social media is really amazing. I met with David at his studio to discuss opportunities to collaborate, as it is part of my role to seek out support from the community to help us advance medical research and equipment needed at RBWH,” Ms Buckley explained. 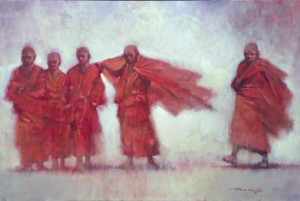 “After admiring much of Davidâ€™s work at the studio, and the many streetscapes and iconic landmarks that David is known for painting, I noticed a Monk that stood out from all the rest …David expressed his joy and passion for painting Monks.

“[He] said he was always commissioned to do streetscapes, and while he enjoys painting he said that painting Monks would give him a moment of freedom and add variety to his work.

When David mentioned this to me, the thought came to mind that we have a long-standing relationship with the Chung Tian Temple (since 1996) and they have supported RBWH Foundation over the years with events such as the Buddha Birth Day Festival at Southbank.

I said to David that there might be a good opportunity for us to talk to them to see if they might like to get involved and lend some inspiration to David by visiting the temple. From there, we were both very excited about where this was going …Â David was happy for us to share the donation equally.

In terms of turnout, what was thought of Hinchliffe’s artworks, and what the general consensus was with regard to the temple as an event space, Ms Buckley had news equally as sweet as the deal that started it.

“The opening reception went really well and the exhibition was full … it is quite a large space – there were likely to be around 150-200 people,” she said.

“Many people said the temple and the art exhibition was a spectacle for the eyes. The templeâ€™s architecture and landscapes made them feel like they were in another world, and Davidâ€™s artwork complimented the scene. It was a good fit.”

“Every time I see David’s work, it honestly takes my breath away. It has the ability to transport you to that moment in time, to take you to that place, to animate a story right before your eyes so you can visualize in your head everything from the sights and sounds, and it captivates you with a kaleidoscope of colour and texture.”

For anyone who enjoys a little Zen every now and then, Ms Buckley provided the relevant information for visiting the temple and seeing the art (see bottom of the article). She also added that the potential contributions to the hospital through the proceeds of sales from the exhibition are something that can, and will make a difference to real peoples’ lives.

“It is thanks to partnerships like the support that David is providing that we are able to help and build a future for medicine …Â It really adds another dimension to purchasing this art.”

To enquire about paintings available for purchase contact:Â