Don Giovanni - The #MeToo of Opera

A man who had his servant keep record of all his sexual conquests as well as his bespoke flattery, categorised by the physical appearances of women.

A man who has turned his techniques of exercising psychological, emotional and physical power over women, into an art form.

A man who masked his true self by day and wore a werewolf mask by night at his own party. 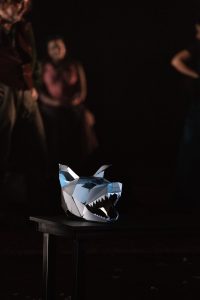 A man who expected Anna’s shame induced silence to help conceal what he did to her at the start of the play.

A man who was able to get away with it, since no one would believe a nobleman such as himself, could be so wicked to women.

This man, is Don Giovanni. And his undoing.

The story begins with one of his conquests gone wrong. Forcing himself onto our heroine, Donna Anna, Don tries to flee from the scene of his crime. But Donna Anna isn’t having any of it. After his attack, she chases him to unmask him, but in the heat of it all, her father (The Commendatore) challenges Don. Aiming his gun at Don only to be killed himself at Don’s hand, the chain of events that kicks off his descent into hell begins. 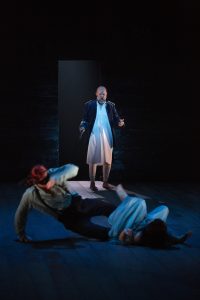 As Don stands over the body of The Commendatore, he stares off to the left side of the stage. Here is where the cameras are, projecting Don’s face and piercing stare onto the backdrop of the stage. It was one of the many intense moments of this performance. 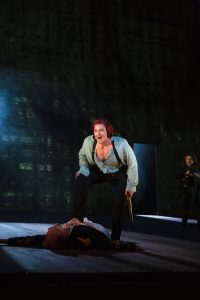 The story and main plot, Don Giovanni is what ties all the characters together. All who end up going out for the blood of Don Giovanni. His man servant Leporello who takes one too many beatings for Don. A married couple who had the misfortune of being toyed by him. A scorned Lover who is still in love with Don Giovanni after he went as far as to call her his wife… Only to bed her and leave. And of course, Donna Anna, who wants revenge for her father’s death with the help of her betrothed, Don Ottavio.

But it is Anna’s response to Don’s violation of her that is the most important part to the story. Her cries and fight for justice against Don, her attacker, is what changes everything for the characters. It is what makes her character so strong amongst the others. Because that she fights against Don despite being so grief stricken and “damaged” by what he has done. It’s puts an end to Don’s conquest all over Europe. 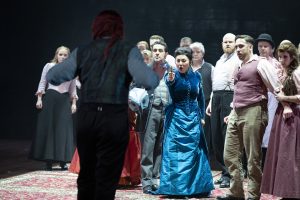 There were so many feelings and reactions heard from around the theatre. There was laughter at the wit and dry humor, Don’s frustrations at having his plans thwarted to bed another woman throughout the play. The gasps and awe at the voices and talents of the actors. The groans of the women at Don’s pick-up lines. It was all there. 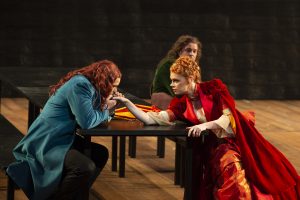 Lindy Hume, the director, believed that this version of Don Giovanni should be experienced through a feminist prism. Lindy Hume is a feminist who has long believed that the perspective on an iconic play such as this, needed to be more balanced. Especially in a world like the opera one, where it is known to be patriarchal. 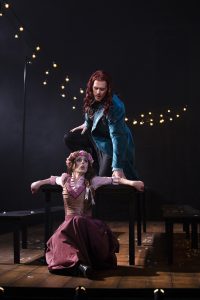 And to have so many brave local woman appear on stage in various stages of undress. Representing the woman who Don hurt, only to become his hell. This put the icing on the cake of this play. It gave a whole lot of meaning to “Hell hath no fury like a woman scorned”. It was Don’s literal final fall from the stage to end the show. 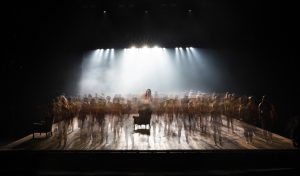 And the applause and standing ovation by the whole theatre, nearly went on as long as the play itself.

Don Giovanni will be playing at the QPAC Theatre until 3rd November. So be sure to get your tickets and go see it before it ends!